After traveling all day and night following an intensive training at SCLC‘s Citizenship School in South Carolina, a group of ten Mississippi movement activists were eager to get home and back to their voter registration projects. The bus they were riding pulled into a rest in Winona, Mississippi.

June Johnson, Annell Ponder, Euvester Simpson, Rosemary Freeman, and James West got out to use the washroom and then went to sit at the rest stop’s lunch counter. Winona’s police chief and a highway patrolman were waiting for them; the driver had stopped before reaching Winona and made a telephone call.

Although the Supreme Court had ruled segregated rest stops in interstate travel unconstitutional, local law enforcement in much of the South continued to ban blacks from “whites only” areas, and the group was almost immediately arrested. From the bus, Mrs. Fannie Lou Hamer watched the five activists’ arrests and left the bus to defend them despite a warning shouted-out by Annell Ponder. Mrs. Hamer was then kicked, shoved, handcuffed, and arrested. These arrests were only the beginning of the COFO activists’ Winona jail nightmare.

It became clear right away that their voter registration work was known to Winona authorities. Greenwood, where SNCC and COFO had a major project underway, was just 30 miles to the west, and June Johnson remembered the county sheriff at the jail growling, “you come over here [from Greenwood] to Winona, you’ll get the hell whipped out of you.”

And that’s exactly what happened. After placing them in different cells, policemen began a series of assaults. First, using a studded leather strap they beat 15-year-old Johnson on the floor until her dress was soaked with blood as she screamed and prayed, remarkably asking God to have mercy on them. Then they turned to SCLC’s Annell Ponder, beating her with “blackjacks, a belt, fists, and open palms…” She recounted later, “They really wanted to make me say yes, sir…and that is the one thing I wouldn’t say.”

The men carried Mrs. Hamer to a cell with two other Black prisoners and ordered one to beat her with a blackjack. She pleaded with them, “You mean you would do this to your own race?” When one prisoner became too exhausted to continue beating her, another was forced to take over. Mrs. Hamer called the violence in Winona “the most horrifying experience I’ve ever had in my life.”

Later, when the men were gone, the jailer’s wife brought cold water to Mrs. Hamer’s cell. “[She] told me she tried to live a Christian life,” Hamer remembered. “And I told her to read the 26th chapter of Proverbs and the 26th verse and she was takin it down on paper…She never did come back after then.”

Because the group had not arrived in Greenwood as expected, COFO and SNCC workers anxiously sought to find out where they were. Willie Peacock organized phone calls to area jails from around the country. Hollis Watkins also called area jails, and after finding out the group was being held in Winona, Lawrence Guyot arrived there and tried to post bail. He was arrested and beaten. When Andrew Young and SCLC finally managed to post bail four days later, the released activists were greeted with the tragic news that Medgar Evers had been gunned down and killed.

In December 1963, the Justice Department brought the police chief and Montgomery County sheriff to federal court in Oxford, Mississippi. The men faced charges for seven counts of conspiracy to deprive the arrested activists of their civil rights. An agent who had examined the bloodstains on Johnson’s and Hamer’s clothes testified to the brutal treatment in the Winona jail, urging the jury to convict the racist police. The attorney defending local law enforcement said, “You have agitators on one hand, and elected officials on the other, who shall you believe?” The all white, local jury found the sheriff and police chief not guilty on all counts.

The following August, Mrs. Hamer famously testified on the violence at Winona jail before the Democratic Credentials Committee. Her speech was so powerful that Lyndon Johnson called a presidential press conference in the attempt to divert national media attention.

Charles M. Payne, I’ve Got the Light of Freedom, The Organizing Tradition and the Mississippi Freedom Struggle (Berkeley: University of California Press, 1995). 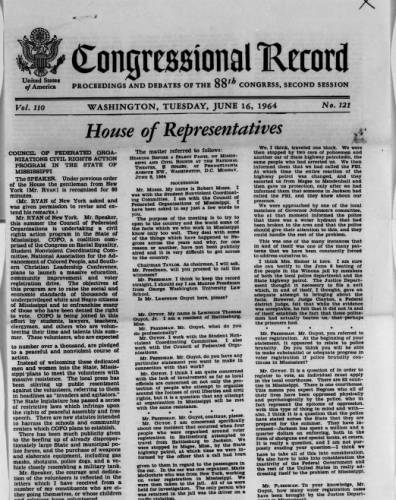 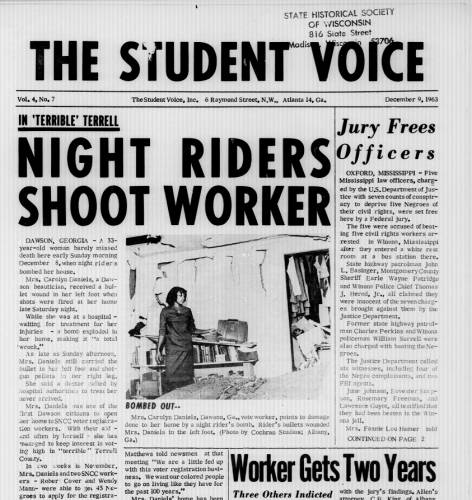