By early summer 1961, the southern student movement was rapidly approaching a crossroads. The sit-ins that sparked the Movement had naturally begun to taper off. Only well-organized student groups like the Nashville Student Movement and the Atlanta Committee on Appeal for Human Rights were able to sustain student activism. The Freedom Rides were also slowing. Many young activists were beginning to wonder what to do next.

In stepped Timothy Jenkins, a recent graduate from Howard University and the vice president of national affairs for the National Student Association (NSA). Jenkins felt that more than nonviolent protest was now needed. He had closely followed SNCC’s early development, often sitting in at organizational meetings and presenting at bi-annual conferences. “After the [Freedom] rides, it was clear that the student movement, if it were to survive at all, would need a new sustainable program and focus,” Jenkins explained. “And I certainly wanted to nudge it down off that lofty, ethereal place of ‘the beloved community,’ and the excessive religious zeal of the pain-and-suffering school of struggle.”

Using his contacts as vice president of the NSA, Jenkins pulled together a six-to-eight week leadership seminar in Nashville, Tennessee, that covered a wide range of historical, economic, sociological, and political topics. More like summer school than an activist conference, “it boasted an extensive list of required readings, mandatory class attendance, and required ‘a term paper in a special area of choice’ from all participants,” recalled Stokely Carmichael, one of the leader’s of Howard University’s Nonviolent Action Group (NAG).

The seminar marked an important shift in SNCC’s history. It exposed a cadre of young activists to the political and social underpinnings of systemic racism. At the time, the Kennedy administration–embarrassed by the public displays of racial violence that resulted from the Freedom Rides–was beginning to funnel money and resources into voter registration, eventually leading to the formation of the Voter Education Project (VEP). Jenkins and others (especially Chuck McDew and Charles Jones) wanted to use some of this money to begin voter registration drives in the Black Belt South, where Black people often made up the majority of the population. “These would also be the places where the Stennis’s and Eastland’s came from,” explained Chuck McDew. “[Our] plan is just to get people registered in those areas and you can disrupt the balance of power.”

What drew Stokely Carmichael and others who would be crucial to this refashioning of SNCC to Nashville was not the lectures and readings, but “the prospect of being among other strugglers … I think that was when we began to bond into ‘a band of brothers.’” After a summer of long meetings and late night discussions, the young organizers were beginning to turn SNCC into a cohesive organization of organizers. Some activists even decided to drop out of school to work with SNCC full-time in emerging projects in Mississippi and Southwest Georgia.

Timothy Jenkins, Panel 13, “What Was SNCC? How Did It Evolve Over the Years? Why Did it Cease to Exist?” SNCC 50th Anniversary Conference, 2010, Shaw University, California Newsreel. 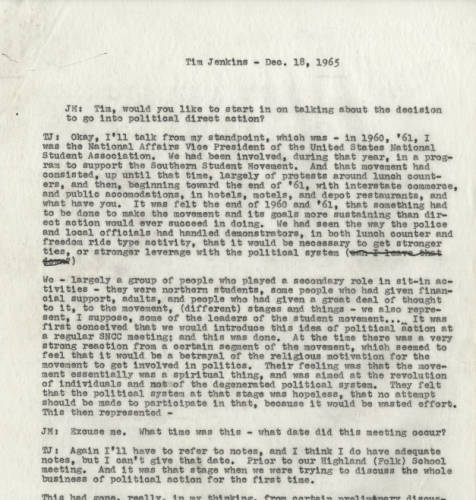 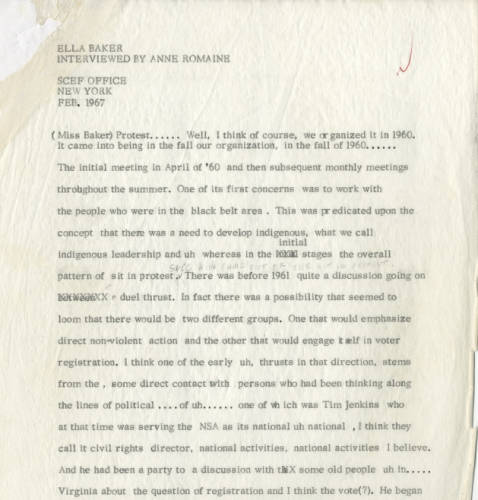 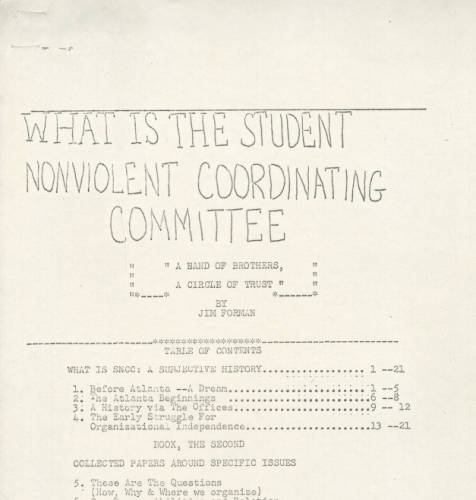 James Forman, “What is the Student Nonviolent Coordinating Committee: A Band of Brothers, A Circle of Trust,” November 1964, Social Action Vertical File, WHS