We march today for jobs and freedom, but we have nothing to be proud of, for hundreds and thousands of our brothers are not here. They have no money for their transportation, for they are receiving starvation wages, or no wages at all.

In good conscience, we cannot support wholeheartedly the administration’s civil rights bill, for it is too little and too late. There’s not one thing in the bill that will protect our people from police brutality.

The voting section of this bill will not help thousands of black citizens who want to vote. It will not help the citizens of Mississippi, of Alabama and Georgia, who are qualified to vote but lack a sixth-grade education. “ONE MAN, ONE VOTE” is the African cry. It is ours, too. It must be ours.

People have been forced to leave their homes because they dared to exercise their right to register to vote. What is there in this bill to ensure the equality of a maid who earns $5 a week in the home of a family whose income is $100,000 a year?

For the first time in one hundred years this nation is being awakened to the fact that segregation is evil and that it must be destroyed in all forms. Your presence today proves that you have been aroused to the point of action.

It seems to me that the Albany indictment is part of a conspiracy on the part of the federal government and local politicians in the interest of expediency.

I want to know, which side is the federal government on?

The revolution is at hand, and we must free ourselves of the chains of political and economic slavery. The nonviolent revolution is saying, “We will not wait for the courts to act, for we have been waiting for hundreds of years. We will not wait for the President, the Justice Department, nor Congress, but we will take matters into our own hands and create a source of power, outside of any national structure, that could and would assure us a victory.”

To those who have said, “Be patient and wait,” we must say that “patience” is a dirty and nasty word. We cannot be patient, we do not want to be free gradually. We want our freedom, and we want it now. We cannot depend on any political party, for both the Democrats and the Republicans have betrayed the basic principles of the Declaration of Independence.

We all recognize the fact that if any radical social, political and economic changes are to take place in our society, the people, the masses, must bring them about. In the struggle, we must seek more than civil rights; we must work for the community of love, peace and true brotherhood. Our minds, souls and hearts cannot rest until freedom and justice exist for all people.

The revolution is a serious one. Mr. Kennedy is trying to take the revolution out of the streets and put it into the courts. Listen, Mr. Kennedy. Listen, Mr. Congressman. Listen, fellow citizens. The black masses are on the march for jobs and freedom, and we must say to the politicians that there won’t be a “cooling-off” period.

All of us must get in the revolution. Get in and stay in the streets of every city, every village and every hamlet of this nation until true freedom comes, until the revolution is complete. In the Delta of Mississippi, in southwest Georgia, in Alabama, Harlem, Chicago, Detroit, Philadelphia and all over this nation, the black masses are on the march!

We won’t stop now. All of the forces of Eastland, Bamett, Wallace and Thurmond won’t stop this revolution. The time will come when we will not confine our marching to Washington. We will march through the South, through the heart of Dixie, the way Sherman did. We shall pursue our own scorched earth” policy and burn Jim Crow to the ground — nonviolently. We shall fragment the South into a thousand pieces and put them back together in the image of democracy. We will make the action of the past few months look petty. And I say to you, WAKE UP AMERICA!

Click here to view document Letter from Courtland Cox to Stokely Carmichael re: providing transportation for the March on Washington, August 18, 1963, crmvet.org 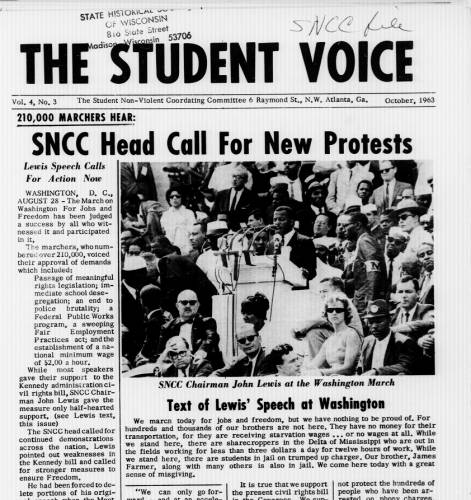