Home » Our Voices » Women in SNCC 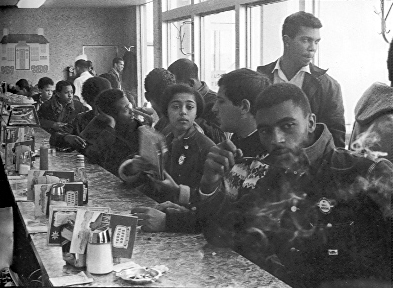 SNCC was a liberating experience for me. In the SNCC that I knew the message was: ‘Do whatever you are big enough to do.’

When a young woman joined the community of SNCC, she stepped into a world where women worked alongside their male counterparts at all levels of the organization. Women didn’t occupy the chair or executive secretary positions (though Ruby Doris Smith Robinson did become Executive Secretary in 1966), but their leadership and influence were felt throughout the organization. Their intellectual contributions were valued and respected.

Women played a vital role in SNCC from its inception. This was unusual, even within the Civil Rights Movement and was a result of the way the organization began… and who began it. SNCC was the most non-traditional, non-hierarchical of the major Civil Rights Movement organizations, in terms of whom and how they organized: in the local project areas and internally within the group. SNCC’s staff was committed to combating society’s structural inequalities and tried, as much as possible, not to replicate those inequalities within the organization.

It wasn’t that sexism didn’t exist (though some women say they never encountered it). Rather, in SNCC, it was minimal and did not impede the important role that women played in the organization.

Not only were many SNCC women accustomed to being in the leadership; equally important, SNCC men were used to seeing them in that position. Like the men of SNCC, many SNCC women were already leaders in their local student movements before they came into SNCC.

Also, they had walked the walk: Diane Nash, as a leader of the Nashville student Movement, had been a strong voice, arguing (even against Attorney General Robert Kennedy) that the Freedom Rides should continue after the initial violence. She then helped plan the Ride’s continuance into Jackson, Mississippi. Ruby Doris Robinson, coming out of the Atlanta Student Movement, had spent a month in Mississippi’s dreaded Parchman Prison after being on a Freedom Ride, then did 30 days of “jail no bail” with other community demonstrators at Rock Hill, South Carolina. The courage – and strategic thinking – of women were part of what grounded SNCC.

In addition, the adult leadership that nurtured SNCC included both men and women. You couldn’t talk about Amzie Moore and C. C. Bryant without also mentioning Fannie Lou Hamer, Victoria Gray and Annie Devine, the troika that led the Mississippi Freedom Democratic Party. Mrs. Hamer and Mrs. Gray were later asked to join SNCC staff; Mrs. Devine was a CORE activist. And, of course, there were the lesser known names: Aylene Quin (McComb, Mississippi), long a local leader known for providing bail money and housing, whose home was bombed as a result; or Laura McGhee (Greenwood, Mississippi), who not only housed SNCC folks, but who became legendary for landing a right hook to a policeman’s jaw after he hit her in the chest. Then there was “Mama Dolly” Raines, who sheltered SNCC workers on her farm (Southwest Georgia)… and also sat outside her house with a loaded shotgun, protecting those SNCC workers in her care. Women were the bedrock of support throughout SNCC’s projects.

It was Ella Baker, however, who most influenced the young SNCC activists. She was their main mentor and advisor. It was she who, in 1960, brought together the young sit-in leaders, while serving as SCLC’s executive secretary. Her long and varied work, building local grass-roots leadership; her genius as a strategist; and her history with a variety of progressive groups – all provided crucial guidance to the young activists as they developed their vision of a more just society.