SNCC depended on young people to be in the frontlines of the Movement, and in Albany, Georgia student activists were ready and waiting. SNCC field secretaries Charles Sherrod and Cordell Reagon arrived in the fall of 1961 to organize for voter registration. That small Southwest Georgia city was home to the historically Black Albany State College, and when the two SNCC field secretaries asked about student leaders, one of their local contacts directed them to Annette Jones.

Jones was already a member of the local NAACP youth council and active in efforts to stop harassment by whites on campus. “There was definitely a movement brewing on campus,” she remembered.

Growing up in Albany, Annette Jones was deeply influenced by adults who believed in voting, equal opportunity, and action. She registered to vote while still a student at Monroe High School because a teacher, B.B. White, took all of his students to register when they turned 18. She was voted “most likely to succeed” of her graduating class.

After high school, Jones began working as a secretary for C.B. King, Albany’s only Black attorney. He pushed her not to wait to go to college, and Jones enrolled at Albany State. She quickly rose as a leader on campus, encouraged by Dean of Students Irene Wright Asbury to push for student rights.

When the two SNCC field secretaries arrived on campus, she helped them talk with students about voter registration and civil rights. In October 1961, Jones participated in the first community meeting for civil rights that was held in the basement of Bethel A.M.E. church. She also began attending to SNCC’s workshops. 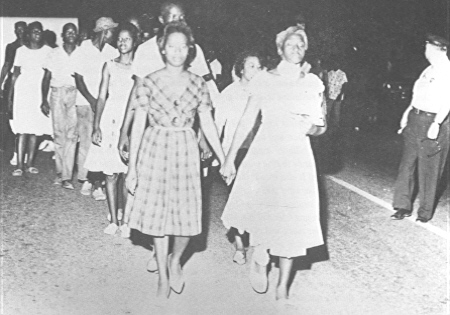 Photo of a night march in Albany, Georgia, 1962, crmvet.org

That November, direct action protests against segregation erupted in Albany. Just before Thanksgiving, two Albany State students–Bertha Gober and Blanton Hall–tried to buy tickets at the white counter of the Trailways bus station. They were arrested and refused to pay bail to get out of jail. This sparked the first mass meeting of the Albany Movement. “I went home and could not sleep at all,” Jones recalled. “I felt as if my whole being was on fire. Now there was something positive I could do with the anger and resentment that had built up over the years. At last, in the words of the Albany Movement’s lawyer, C.B. King, I had ‘found form for the expression of my discontent.’”

The Sunday night after the mass meeting, Jones and other students canvassed campus dorms, urging the students to join in a protest march the next day. Only a small group showed up the next morning, but as they started walking, the number of Albany State students grew. Community members and high school students joined the march, which circled around City Hall. No one was arrested that day. Two weeks later, however, Police Chief Laurie Pritchett arrested hundreds of protesters, filling the jails in surrounding counties. Jones served her time in notoriously murderous “Bad” Baker County.

When Jones returned to make up the exams she had missed while in jail, she was asked to leave campus. The administration expelled Jones, Gober, Hall, Bernice Johnson, and Anne Boyer; it also suspended 34 other students involved in the protests. Jones, who had been named Miss Albany State, lost her crown. Many of these students, including Jones, worked closely with Sherrod and Reagon, becoming a committed cadre of organizers. Annette Jones explained her continuing involvement, “They had come to help Albany, and I was an Albanian. There was no way I could leave them.”

Bernice Johnson Reagan, “Uncovered and Without Shelter, I Joined This Movement for Freedom,” Hands on the Freedom Plow: Personal Accounts by Women in SNCC, edited by Faith Holsaert et al. (Urbana: University of Illinois Press, 2012), 119-127.

Annette Jones White, “Finding Form for the Expression of my Discontent,” Hands on the Freedom Plow: Personal Accounts by Women in SNCC, edited by Faith Holsaert et al. (Urbana: University of Illinois Press, 2012), 100-118.

Annette Jones White discusses growing up in Albany and being born into the Movement, Our Voices: Strong People, snccdigital.org