When someone shot into the living room window in Freddie Greene’s house in the spring of 1963, the first call her family made was to the local SNCC office in Greenwood. “It’s not like if somebody shoots you down you call the police,” she explained. “It’s SNCC that you call, because this is who’s coming to help you out.”

The Greene family had been one of SNCC’s earliest supporters. Her father was a small businessman, and the family owned the house they lived in, one block from the railroad tracks separating Black and white Greenwood. Her brother, George, was one of the first people to meet SNCC’s Sam Block when he started organizing in town. Dewey, her older brother and a Navy veteran, had attempted to enroll at the all-white University of Mississippi and then began working with the Mississippi Free Press. “All of this was urging me to get involved,” Freddie recalled, “so as the Movement people came in, I began to get involved.”

She started canvassing to get people to register to vote when she was a senior in high school. She understood the dangers that Black people faced trying to register: “They’re afraid of losing their job, they’re afraid of losing their house, they’re afraid of getting killed.” That same year, the Leflore County commissioners discontinued food subsidies to poor people, and Freddie assisted in SNCC’s efforts to distribute food and clothing in her hometown. The work opened her eyes to just how oppressive the situation was they were living in.

In the fall of 1963, Freddie entered Dillard University in New Orleans to study nursing. By the end of her sophomore year, however, she chose to leave school, feeling that Movement was more important than studying nursing right then.

During the summer of 1964, Freddie joined SNCC’s McComb project in the southwest part of the state. Having finished her freshman year in college, she also didn’t want to return home to live. There she continued canvassing to get people registered to vote while also encouraging people to register with the Mississippi Freedom Democratic Party. One July night, the Freedom House where Freddie, her brother George, and other SNCC staffers were sleeping was bombed. The dynamite blew off part of the garage of the house, but no one was seriously hurt. There were more than a dozen bombings in McComb that summer, earning it the nickname “bomb capital of the world.”

The following summer, Freddie once again was working in McComb when she went up to Jackson to join demonstrations for fair voting laws at the state capitol. Blue-helmeted policemen arrested hundreds of protestors, loaded them into garbage trucks, and took them the state fairgrounds, the improvised prison. After a week of confinement, morale was beginning to drop. Freddie and Janet Jemmott began demonstrating at the fairgrounds, trying to keep spirits up while attorneys worked to free those arrested. The two ended up spending a week confined at the fairgrounds themselves.

During the summer of 1965, Freddie met SNCC’s executive secretary Jim Forman who recruited her to work in the national office. She moved to Atlanta and started working the switchboard and later in the finance office. When Ruby Doris Smith Robinson got sick in 1966, Freddie took over managing the national office and its connections with SNCC’s field offices and Friends of SNCC offices in the North and West. There was no time to recruit, she remembered. “It’s time for you to do it.”

In October 1967 she traveled to Albuquerque, New Mexico as part of SNCC’s delegation to Convencion Nacional de la Alianza Federal de los Pueblos Libres, a coalition-building summit that forged ties between Native Americans, Mexican Americans, African Americans, and whites. In the summer of 1968, Freddie left SNCC and moved to Washington, D.C, where she started working with the United Neighborhood Youth Program and went back to college to get her degree in accounting.

Charles Payne, I’ve Got the Light of Freedom: The Organizing Tradition and the Mississippi Freedom Struggle (Berkeley: University of California Press, 1995), 133-180.

Interview with Freddie Greene Biddle, Jennifer Lawson, and Karen Spellman by Emilye Crosby, May 14 and October 9, 2016. 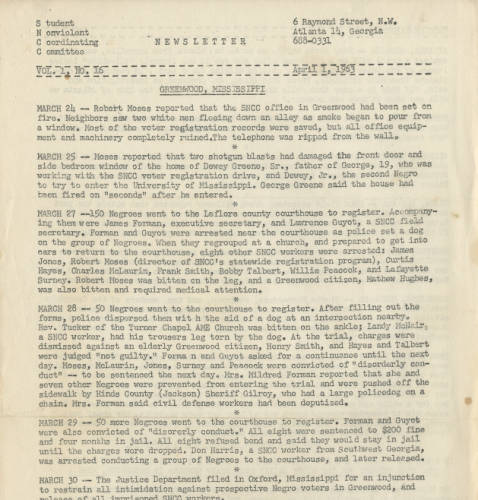 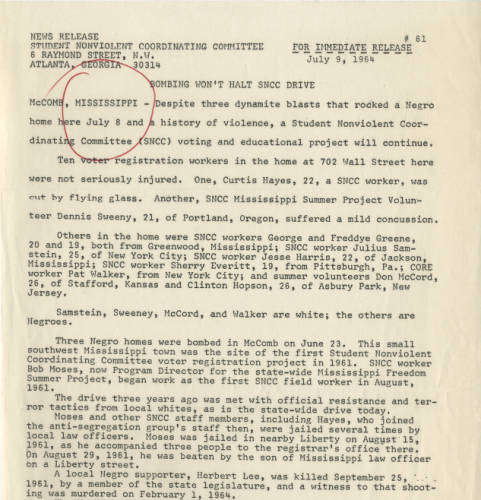 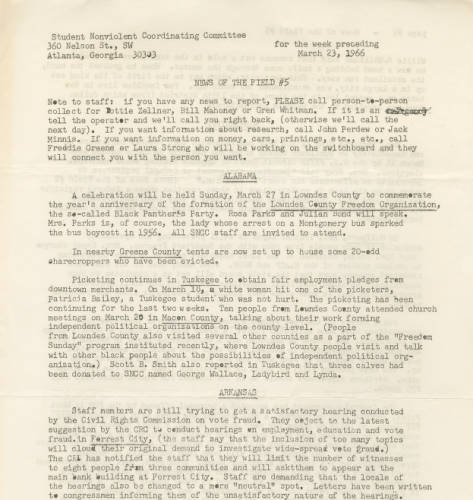