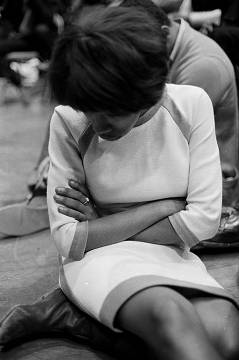 In March 1965, Tuskegee student body president Gwen Patton defied threats of expulsion and led fellow students to the state capitol building in Montgomery. As members of the Tuskegee Institute Advancement League (TIAL), the students took their lobbying for the passage of the Voting Rights Act directly to Governor Wallace. At the steps of the capitol building, before they could even enter the rotunda, they were met by police officers and state troopers. The students sat down and began to sing freedom songs, but officers arrested and assaulted them. “The ridin’ on high to freedom had plummeted to the sinkin’ on low of what it means to be Black in Alabama,” Patton later reflected. “The actions of the FBI left us wondering if we, as a people, were even on the nation’s agenda.”

Gwen Patton was born in Detroit to parents who placed a high value on education. Patton’s parents had come north with the Great Migration, and like many children of the north, she spent summers with her grandparents in Montgomery. Every year as she made the trip south, she was reminded of the differences between the regions. Kentucky did not allow integrated train carriages, and so she and other African American passengers would have to change to segregated carriages at the front of the train once they reached Cincinnati. She described it as, “like coming out of the free states and into the slave states.”

Patton relocated to Alabama permanently in 1960 when her mother passed away. Even before she began to attend college at Tuskegee, she had become a fixture in the Macon County Movement. Her grandparents, who owned some property, allowed SCLC to hold their meetings there. Tuskegee, she wrote, “was part of my deepening of race pride, of race progress.” However, the conservative attitude of Tuskegee’s leadership toward student protest and movement activities frustrated her. Professors who were committed to the Civil Rights Movement, like Paul Puryear, did not have their contracts renewed while those who were less committed and moderate continued on. After the protest on the steps of the capitol building in Montgomery, Patton was told by the president of Tuskegee that, even with her dual bachelor’s degrees in English and History, she would never get a job in Alabama because of her movement activities. She persevered and eventually received her doctorate from Notre Dame.

The death of Sammy Younge in 1966 galvanized her to do more, and her activities soon attracted the attention of the FBI, who kept her under surveillance during the mid-1960s. In February 1967, on the eve of the first Black Power Conference, held at Tuskegee, her car was run off the road in a mysterious hit-and-run accident. She was left with one leg permanently shorter than the other, but it did not dampen her commitment to the Movement. In 1968, Patton relocated to New York and became actively involved in the efforts of Black women fighting the “triple oppression” leveled against them. She went on to become the chair of the Black Women’s Liberation Committee and later served as chair alongside Mae Jackson. For her, “freedom meant that no one could say ‘no’ to me without a very good reason.”

Interview with Gwen Patton by Diane Feeley and David Finkle, 2008, Against the Current. 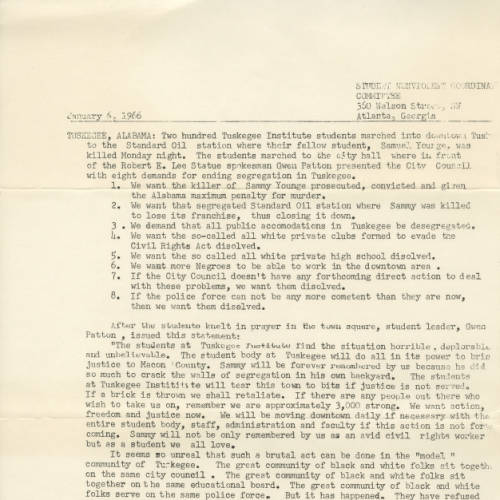