Joe and Rebecca McDonald opened their home to the first SNCC workers who came to Ruleville in August of 1962. And white citizens in the small Delta town of 1,100 reacted with everything from gunfire to economic reprisal. More than offering a place to stay, the McDonald’s unwavering support in the face of danger–and that of the other local people willing to throw in their lot with SNCC organizers–was the grassroots base of the Movement.

The McDonald’s had owned their house at 909 Reden Street for nearly thirty years when Amzie Moore delivered Charles McLaurin, Charlie Cobb, and Landy McNair to them. “Mr. Joe,” as they called him, was in his seventies, and had worked for most of his life as a sharecropper. He could not read or write; his wife, Rebecca, had a seventh-grade education. She had already joined SCLC’s Citizenship Education Program the winter before the SNCC workers arrived. She opened her citizenship school on Lafayette Street in March and taught forty students how to fill out voter registration forms.

Mr. McDonald was one of the few African Americans registered to vote in Sunflower County, and the SNCC workers set out to add more to the rolls. By early September, their efforts drew retaliation. On September 10, night riders drove through Ruleville’s Black neighborhood, firing shots at the homes of those involved in voter registration work. The McDonald’s, alone in the house, jumped into the bathtub to shield themselves from the shooting. Next door at the Sisson’s house, bullets wounded their teenage granddaughter and her friend.

When Charlie Cobb went to the hospital to check on the girls, Mayor Charles Dorrough arrested him. He accused Cobb of carrying out the shootings himself as a publicity stunt. The mayor also decided to confiscate Joe McDonald’s gun in the incident. Mr. Joe, a dignified man of great probity, relied on his gun mainly to put food on his table, and everyone knew that he was no danger to white Ruleville.

The three SNCC workers told McDonald that he had a right to his shotgun. Cobb brought out a history textbook and opened it up to the U.S. Constitution. Then Charles McLaurin pointed to where it said so in the second amendment. After asking Cobb to fold over that page, Mr. Joe took the book from him.

A while later, Cobb, McLaurin, and McNair realized that McDonald had left the house. Mrs. McDonald told them, “He went to get his gun. You said it was alright.” They were alarmed for his life and were about to run after him when they heard Mr. Joe’s old truck rattling into the yard. When he got out, he held the shotgun triumphantly above his head.

The McDonald’s took an enormous risk in housing the SNCC field secretaries. But the SNCC workers also helped local people, like Mr. Joe, find their voice and demand justice in Mississippi’s separate and unequal society.

Charles M. Payne, I’ve Got the Light of Freedom: The Organizing Tradition and the Mississippi Freedom Struggle (Berkeley: University of California, 1995). 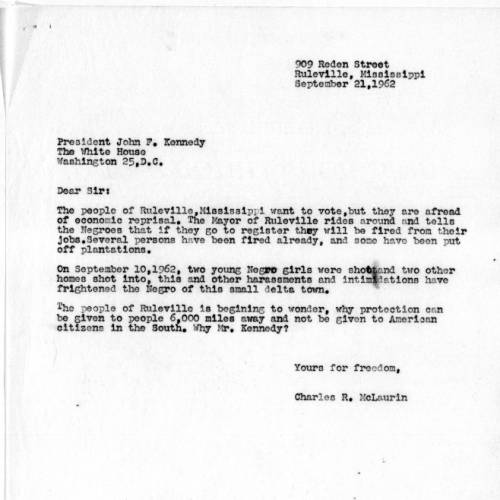 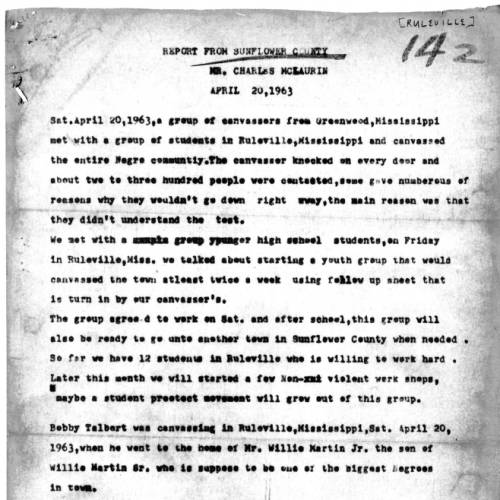