Luvaughn Brown grew up tough and angry in Jackson, Mississippi; “always ready to fight,” he told an interviewer years later. His father was abusive. The city was completely segregated. Then when he was just 16-years old, he met James Bevel and Bernard Lafayette. In a sense, they changed his life, and before long he and his friend Jimmy Travis walked into a Woolworth’s Department store and asked for service. They were arrested. After his release, his involvement with Mississippi’s Freedom Movement deepened.

Brown was part of cadre of native young Mississippians who committed themselves full-time to the Movement. He was first arrested in 1960 for trying to integrate a lunch counter. Then a year later, he and Jesse Harris went to support Diane Nash at a court hearing where she was charged with contributing to the delinquency of minors for training them in nonviolent protest. Brown and Harris refused to sit on the so-called colored side of the courtroom. They were arrested and sentenced to forty days hard labor at the Hinds County prison farm.

In 1962, Brown joined Lawrence Guyot and Sam Block in SNCC’s project in Greenwood, Mississippi. Fear paralyzed the Black community in Greenwood then. On a typical day, the organizers would knock on 100 doors; ten people would agree to register. On the day of, maybe only three would show up; maybe only one or no one. Brown recalled that “during the day, you had to be on the street. You had to show people that you weren’t afraid even if you were.”

The kind of persistence that defined the work in Greenwood, as well as the courage born in the sit-in movement, slowly began to pay off, and the organizers started regularly bringing small groups to the courthouse. But growing support also brought increased danger. The voter registration efforts of Brown and his SNCC co-workers made them a targets. The Daily Commonwealth, Greenwood’s local newspaper, printed the address of their headquarters.

One night, the organizers noticed a police car parked in front of the office, which at that moment was occupied by Brown, Lawrence Guyot and Sam Block. The police car left and another car with eight men drove up. The men got out of the car, carrying guns and chains. Sam Block crouched down in front of a window and called John Doar at the Department of Justice who had promised to protect activists doing voter registration work. Doar said that the Justice Department could not do anything until a crime had been committed and recommended that they leave the house. As the posse climbed the staircase, the young organizers jumped out of the bathroom window and onto the neighboring roof. They scrambled down a TV antenna and fled to a designated safe house in Greenwood’s Black community.

When they came back, the office had been ransacked. Three days later, the office was broken into again. The police intimidated their Black landlord, who asked SNCC to leave. The organizers agreed to leave the office but refused to abandon Greenwood. They temporarily set up shop in Amzie Moore’s home in neighboring Cleveland, Mississippi.

Later in life, Brown frequently shared stories of his movement experiences in schools, something he began doing when his daughter asked him to speak at hers. 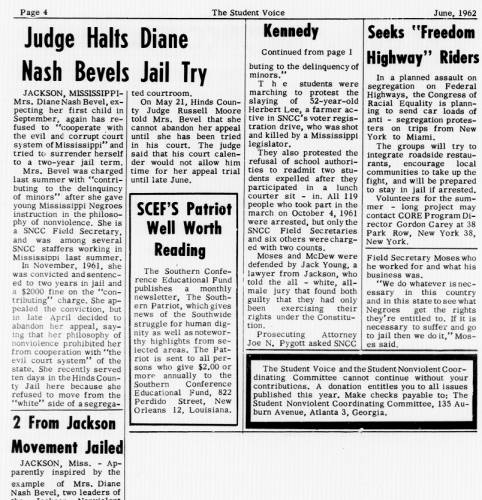 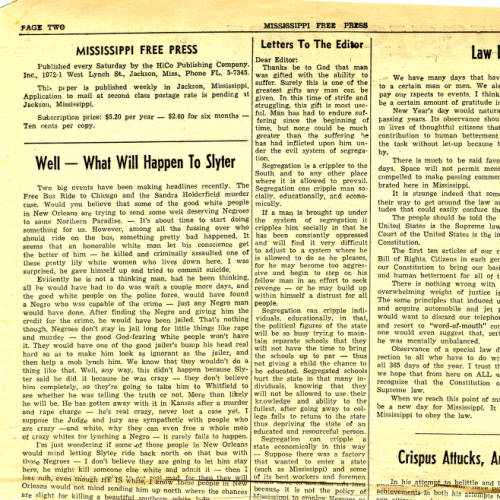 Letter to the Editor by Luvaughn Brown, May 12, 1963, Mississippi Free Press, WHS 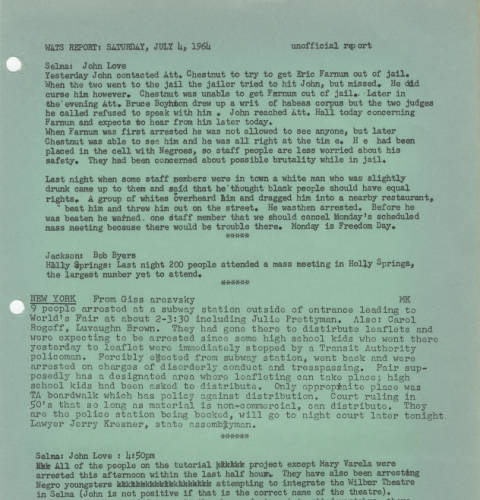