Brave, influential local ministers were crucial to SNCC’s efforts. And in Albany, Georgia, Reverend Samuel B. Wells was one of the most powerful supporters of the Movement. He was a World War II veteran. When he returned to Albany in 1947, he found that uniformed veterans were often beaten and harassed; they were second-class citizens in the very nation they had fought for and called home. Wells went to work doing any and everything he could for the Movement, especially its young people.

Rev. Wells was one of the first leaders in the community to welcome SNCC to Albany when they arrived in 1961. As one of the student activists remembered, “He was everywhere, always in the thick of things, urging the crowds at mass meetings to do more and showing them how by example.” He canvassed for voter registration, arranged transportation to voting polls, and remained steadfast in the face of violent backlash. During the 1961 Albany public transit boycott, Wells was among the leaders transporting people to and from work. 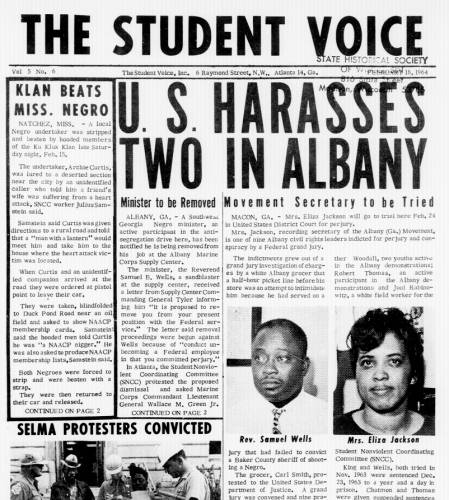 In July 1962, Dr. Martin Luther King, Jr., SNCC leaders, the Albany Movement, and seven hundred local Black people came together for what was supposed to be a mass march led by Dr. King. At the last minute, movement leaders got word that a federal injunction prohibited them from leading the march. While the leaders mulled over their next decision, Wells declared to the waiting crowd, “We will go down to City Hall, and we will protest peacefully the evils that have been grinding the life out of our spirits for ninety-nine years.” Two hundred people followed Wells out of the door into the streets for protest. As the crowd reached the town’s business district, Reverend Wells fell to his knees in protest and prayer, infamously leading the Chief of Police to respond, “All right, Rev., come on and get up, goddamn it. Let’s go to the jail.” One hundred sixty people followed Wells into jail that day, including his teenage daughter.

Wells was arrested at least ten times during the Movement. During a 1963 lawsuit, he faced federal indictment for an attempt to obstruct justice. Wells, then the second vice president of the Albany Movement, was asked to leave his job as a sandblaster at the Marine Corps Supply Center. Even though he had worked there since 1955, he was declared unfit to be a federal employee. SNCC protested the actions, alleging that Wells was being forced out in retaliation for his activism.

Time and time again, Wells practiced what he preached. Affectionately, the black students at Albany High School remember that when they integrated the all-white high school in 1964, Rev. Wells took the students to every single pep rally and sports game. Unmovable, Wells sat with the students as hostile people hurled insults, soda, liquor, and firecrackers in their direction.

Joann Christian Mants, “We Turned This Upside-Down Country Right Side Up,” Hands on the Freedom Plow: Personal Accounts by Women in SNCC, edited by Faith Holsaert, et al. (Urbana: University of Illinois Press, 2013), 128 – 140. 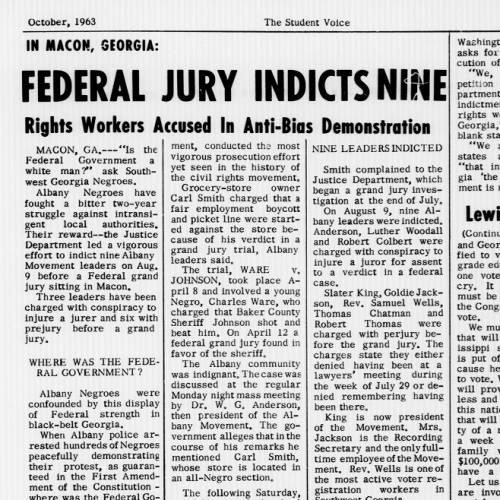 Click Here to View Document
“Upside Down Justice: The Albany Cases” published by the National Commitee for the Albany Defendants, [1964], crmvet.org