Robert Burns saw power in SNCC and recognized a little of himself in its young organizers. “[SNCC represented] things I had thought over years and years but I just didn’t have the education and the know-how to make the speeches, to get it across…”

He had long been frustrated with the treatment of Black folks in Greenwood, Mississippi. Then SNCC’s Sam Block came to Greenwood in the summer of 1962 to start a voter registration project. When he met Block, “it was a thrill to me.” After Burns found out that Sam Block was living in an abandoned vehicle, he decided to give him a room above his photography studio on Avenue I, although doing put himself at risk and lost him some friends. However, Block “needed some help, he needed all our support, which he didn’t get.”

Robert Burns served in World War II as an army staff sergeant. During his time in the military, he listened to the experiences of his fellow servicemen and began to piece together why things were the way they were, “You know, 75 or 100 men and just sit down and talk about what happened in their home and this one talk about… what went on, and how it went on, and what did they do about it and all this kind of stuff.” Although Burns only had a 3rd grade education and could hardly read and write his name, he was thirsty for new ideas and a way to articulate the changes he saw necessary for American society.

For a while after his time in the military, he sold copies of the Chicago Defender. He was interested in the ideas the newspaper presented and wanted to share them with others. Burns moved to Greenwood, the heart of Mississippi’s cotton country, in 1947 and landed a job with the U.S. Postal Service. Recognizing the potential impact of voting, he decided to register to vote in 1951. Although he didn’t vote until a decade later, he always kept his poll tax paid.

Although he was a member of the Elks and the NAACP, in many ways, it wasn’t until SNCC showed respect for him and his ideas that he really came into his own. Beyond offering Block lodging and office space, Burns also lent him his skills as a photographer, something he had picked up on the side. In late July 1962, Block asked Burns to take photos of Welton McSwine, who was severely beaten after being arrested and charged for peeping into a white woman’s window. Together, they sent the images to the Justice Department.

“The Movement in Greenwood was not built with young people … but with older people who were angry, who was looking for some kind of direction,” recounted Sam Block, looking “for somebody who could give form and expression to ideas and thoughts and things that they had had in mind for years – that they wanted to do and just couldn’t bring it together.”

Burn’s work with Block was noticed by the white community in Greenwood, and he quickly found himself facing threats and harassment. Under pressure from whites he stopped renting to Block. In mid-August 1962, Burns was arrested. City officials had convinced his first wife from ten years prior, who he had never legally divorced, to sign a document that she believed would keep him out of legal trouble. However, the document actually called for Burns’ arrest on account of bigamy. Burns was arrested, and his bail was set at $10,000.

After that, his active role in the Movement diminished although he continued to express support for “his boys” in SNCC. Though extremely vulnerable to reprisals, without local people like Robert Burns, who knowingly put themselves at risk through their association with the its organizers, SNCC would not have had the impact that it did. 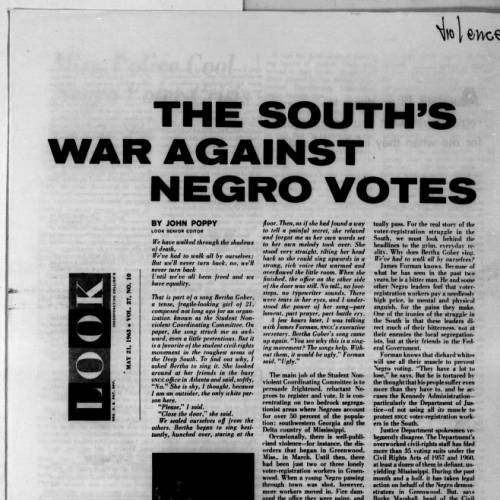