On January 6, 1966, SNCC issued a statement condemning the Vietnam War, charging that, “the United States government has been deceptive in its claims of concern for the freedom of the Vietnamese people.” Many members of state and national government denounced opposition to the war as being “close to treason.” Southern segregationists especially, who had long opposed the Freedom Movement, claimed that opposition to the war proved that civil rights activists were “un-American.”

African Americans certainly had good reasons to oppose the war in Vietnam. Many wondered why they should fight abroad for a nation that still denied them basic human rights. SNCC activists also resented the draft for the threat it presented to its male staff. These organizers generally lacked the deferments available to many white, middle-class college students, and they could expect little to no sympathy from their draft boards, most of which were located in the South.

All of this first began to take concrete shape in July 1965, when local activists in McComb, Mississippi circulated a leaflet following the death of John D. Shaw in Vietnam. Shaw had been a student at Burglund High School during the 1961 protests in McComb. The McComb position emphasized the lack of racial equality in the U.S. and expressed solidarity with people of color in Santo Domingo and Vietnam. No Black Mississippian should be fighting in Vietnam for the white man’s freedom, the statement said, “until all the Negro people are free in Mississippi.”

This was the first anti-war statement by a civil rights organization. But, a month later, on August 12, 1965, Dr. Martin Luther King Jr. gave his first speech opposing the war in Vietnam at a rally in Birmingham, Alabama.

By August 1966, opposition reached its height when several members of SNCC’s Atlanta Project gathered at the Army Corps and Induction Center for the Atlanta area to protest the drafting of Black men to fight in the Vietnam War. The demonstrators carried placards saying, “The Vietcong never called me ‘Nigger’” among others.

Increasingly, Black activists charged that the war itself was racism, and many African Americans developed a sense of racial solidarity with the Vietnamese. One SNCC fieldworker stated, “You know, I just saw one of those Vietcong guerrillas on TV. He was dark-skinned, ragged, poor and angry. I swear, he looked just like one of us.”

Movement activists had long been experiencing first hand the lengths racist whites would go to in order to maintain oppressive power over people of color. In many ways, grassroots organizing was a logical and inevitable stepping stone for anti-draft and anti-war sentiments. As SNCC’s Bob Moses noted, “our work, particularly in the South, taught us that the United States government has never guaranteed the freedom of oppressed citizens.”

Clayborne Carson, In Struggle: SNCC and the Black Awakening of the 1960s (Cambridge: Harvard University Press, 1981), 183.

Simon Hall, Peace and Freedom: The Civil Rights and Antiwar Movements in the 1960s (Philadelphia: University of Pennsylvania Press, 2011), 8-12, 22. 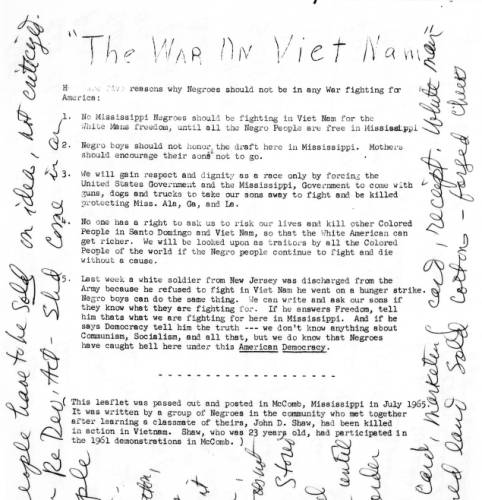 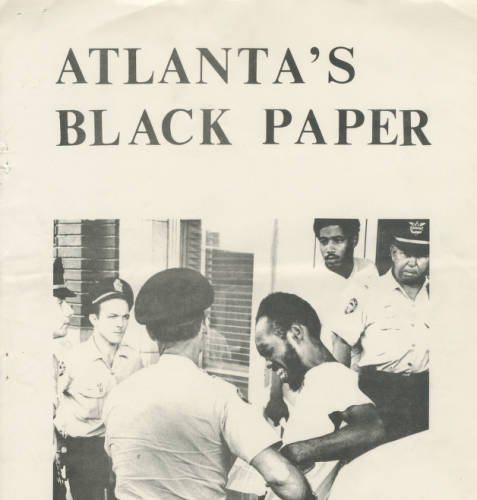 Click Here to View Document
“Letters on the Draft,” The Movement, May 1967, crmvet.org