Although Bob Moses had come to McComb to work on voter registration, two young people in town “Freedom Riders” had arrived, and they were anxious to launch sit-ins, especially since they were too young to vote. At the same time, Ruby Doris Smith, Charles Sherrod, Charles Jones and Marion Barry came to McComb, after they’d been arrested in the Freedom Rides, and began holding nonviolent workshops. A Pike County Nonviolent Action Movement was organized. Hollis Watkins was president; Curtis Hayes was vice president. 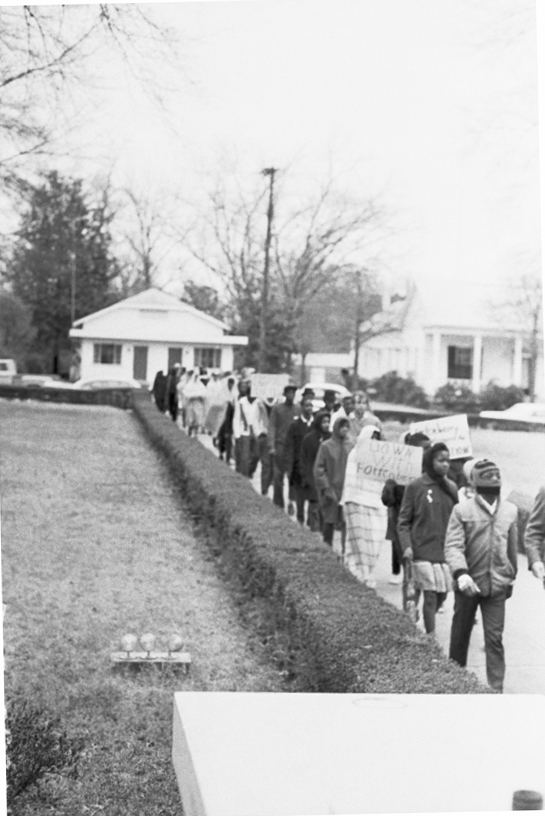 On August 30th, fifteen-year-old Burglund High School student Brenda Travis along with her classmates, Robert Talbert and Ike Lewis, staged a sit-in at McComb’s Greyhound Station. They were arrested and remained in jail until October 3. After they were released, Ike Lewis and Brenda Travis learned that they had been expelled from school.

On October 4th, 115 Burglund students walked out in response to the expulsions and the murder of Herbert Lee. SNCC had not organized the walkout and was surprised when they saw students walking on the sidewalk in front of SNCC’s office in downtown McComb. Some of the SNCC organizers were anxious about the protest but felt they had to support the student action. As Chuck McDew put it years later, “I thought about Gandhi when he saw his people massed for protest. ‘There go our people’ Gandhi said. ‘We have to hurry and catch up with them.’”

The students marched to city hall. They kneeled and prayed on the steps and one by one they were dragged off by the police. One student was arrested while reading a statement saying, “We are children of God, who makes the sun shine on the just and unjust. We petition all our fellow men to love rather than hate.”

At the end of the protest, Bob Zellner, SNCC’s sole white field secretary–an Alabamian–had been brutally beaten; Bob Moses and Chuck McDew were arrested for contributing to the delinquency of minors. Without a trial, a judge sentenced Brenda Travis to an indeterminate term in a juvenile correctional facility. According to the judge, “their own behavior determines when they will be released.”

After the walkout, the students refused to go back to school unless Travis was allowed to return with them. Principal Higgins agreed to let the students come back only if they signed a pledge promising to end their involvement in the Movement. The students refused and staged protests in front of the school in the days following their mass arrest. In reaction to the continuing protest, Principal Higgins threatened to expel anyone who didn’t return to school by October 16. On the 16th, the students went back to school, turned in their books and left.

SNCC set up a temporary school for the students who had a been expelled called Nonviolent High. The students studied there for a few weeks before Campbell Junior College agreed to take responsibility for their education.

The reactions of adults in the community were mixed. Some students inspired their parents to join the Movement, while other parents feared reprisals. Brenda Travis heard stories of parents who beat their children in front of the police. “I was told that many of the parents were angry and frightened.” Travis recalled, “And they disciplined — beat their children there at the jail — to show [the police] that they were in control and that this would never happen again.”

Some adults decided to support the students. Initially C.C. Bryant voiced his frustration over the arrests. He had invited SNCC to McComb to register Black voters not to stage protests. But after the walkout, he declared, “Where the students lead, we will follow.”

Charles M. Payne, I’ve Got the Light of Freedom: the Organizing Tradition and the Mississippi Freedom Struggle (Berkeley: University of California Press, 1995), 111-131.