Under the ASCS system, farmers in each county elected a committee that divided up the money and acreage allotments amongst them. Historically, Black people in the Deep South were excluded from these elections, and the all-white committees denied Black farmers their fair share–enriching white farmers at the expense of Black people. In the mid-1960s freedom organizations such as SNCC, CORE, and COFO began organizing Black farmers to vote in and run candidates for ASCS elections. 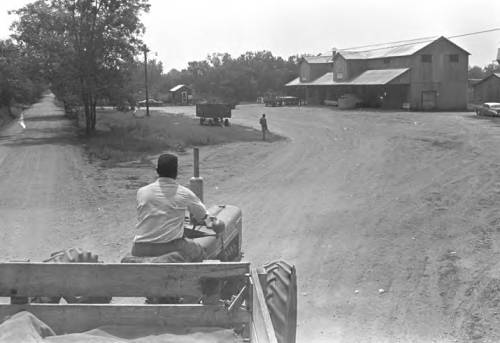 But gaining a committee position was as difficult as gaining the right to vote had been before the Voting Rights Act. “There’s just no way to win it,” said a discouraged civil rights worker, after the 1967 Macon County, Alabama ASCS election results were announced. “No matter what we do, the white folks have the power to defeat us,” he continued, shaking his head in response to their failure to name a significant number of Black people to the Macon County’s five ASCS community committees.

Dr. Ellis Hall, a Tuskegee Institute veterinarian who helped run the Macon campaign, said there were two main reasons why most Black candidates were defeated. “The (Negro) vote was split,” he said, “And then there were extra (white) votes recruited…” This was a major point of concern for local Black farmers because members of ASCS community committees elected the members of the more powerful county committees. The county committees administered federal farm programs and decided who received the benefits as well as how much cotton each farmer was allowed to grow.

It was much the same story in Mississippi. ASCS programs had always been run by white people, and Black farmers received disproportionately smaller acreage allotments. In the 1964 ASCS county committee elections, COFO decided to run candidates in twelve majority-Black rural counties. Although any farm owner, renter, or sharecropper could vote, few Black farmers could navigate the complicated election procedure. A county was divided into “communities” of from 200 to 300 farmers. Then each community elected a committee of five, with the top three vote-getters serving as delegates to the county convention.

Black people had to win the majority of community elections in order to have any representation on a county committee. Since few if any Black people had participated, COFO launched an intensive campaign weeks following the Freedom Vote to educate farmers about the election process or, in some counties, to mail in the ballots. Unfortunately, the ASCS vote followed the same pattern as general elections. White officials harassed Black farmers who attempted to cast their vote while white people with questionable farming credentials were permitted to vote.

“We are tired of tokenism and half-way measures,” cried Otha Williams, president of the Madison County Farmer’s League, which had worked closely with COFO in the December elections. Though the results of the ASCS elections proved to be disappointing, organizers found the experience worthwhile. The vote had been a means of reaching new people with a program important to the farmers, who in many regions turned out in unexpectedly large numbers. At a time when the Mississippi Movement appeared to be losing ground with its constituency, the ASCS elections proved that local people could organize given a practical reason to do so.

In 1994, the ASCS was merged with other Agriculture agencies to create the Farm Service Agency.

Click Here to View Document
“Are You a Farmer?,” SNCC pamphlet on the ASCS elections, 1966, crmvet.org

Click Here to View Document
“Do You Plant Cotton?,” SNCC pamphlet on the ASCS elections, 1966, crmvet.org