SNCC and the Congress of Racial Equality (CORE) worked closely together throughout the South, and especially in Mississippi. CORE began in Chicago in 1942 when James Farmer, who would become its first national director, proposed the creation of an organization that would use “Gandhi-like techniques of nonviolent resistance – including civil disobedience, non-cooperation, and the whole bit – in the battle against segregation.”

Until the 1960s, it was largely northern, mostly white, and led by grown-ups. The outbreak of sit-ins in 1960, however, began to move CORE southward and saw the emergence of young people into the ranks of its leadership. Projects began in various southern states, most notably Louisiana. In 1961, CORE began the Freedom Rides through the South to test federally-ordered desegregation of buses and bus stations. The Freedom Rides offered many young activists, including those in SNCC, their first experience in organized activism in the South, as well as helped CORE expand its southern presence, especially in Mississippi.

CORE occupied a unique position within the Mississippi Movement. Officially, the organization had its own distinct territory–the Fourth Congressional District–mainly for its national office, which wanted the visibility to support its fundraising efforts. However, on the ground, the organization played a more organic role in the Movement. Under the direction of young leaders, like Tom Gaither and Dave Dennis, CORE’s Mississippi project worked within the same organizing tradition as SNCC. Both organizations focused on developing local leadership and building local movements through voter education and registration. In Madison County, CORE’s project looked much like SNCC’s in Leflore, Bolivar, and Sunflower counties in the Delta. Young and energetic field workers, like George Raymond, Anne Moody, and Mateo “Flukie” Suarez, worked hand-in-hand with a local, older generation of movement stalwarts like C.O. Chinn and Annie Devine to build a strong local movement.

C.O. Chinn and George Raymond in particular had a strong working relationship, which was important to gaining local support for the voter registration struggle. Anne Moody, a CORE field worker from Centreville, Mississippi described Chinn as “the type of person that didn’t take sh*t from anyone.” In the summer of 1963, Chinn and Raymond worked closely together, making rounds and speaking to people in Canton and Madison County strengthening the budding local movement. As was also true in SNCC’s work, intergenerational relationships characterized CORE’s work in Mississippi, as local adults nurtured, protected, and legitimized the work of younger civil rights activists.

CORE workers in the state also had a strong relationship with their SNCC peers. According to many movement veterans, the only difference between CORE and SNCC at the local level was whether or not one wore a blue or red shirt. Dave Dennis, CORE’s Mississippi project director was also the assistant program director of COFO. This brought CORE in close collaboration with the other organizations under COFO’s umbrella, including SNCC and the state NAACP. This type of relationship modeled how to transcend organizational divides and create a cohesive, statewide effort to secure voting rights. 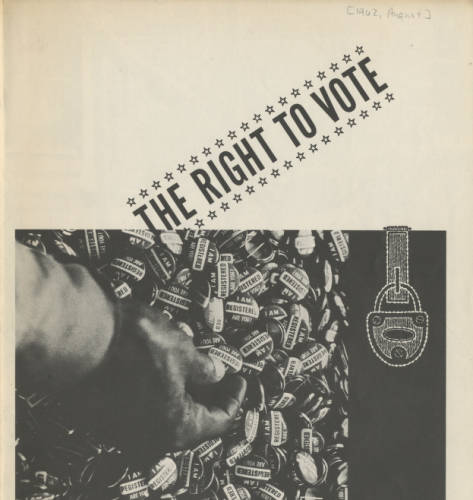 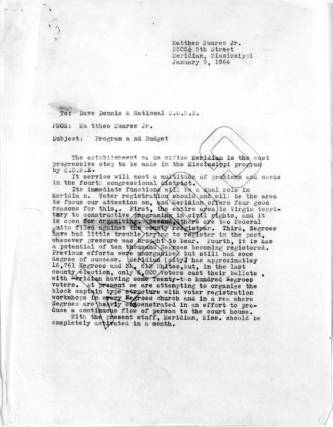 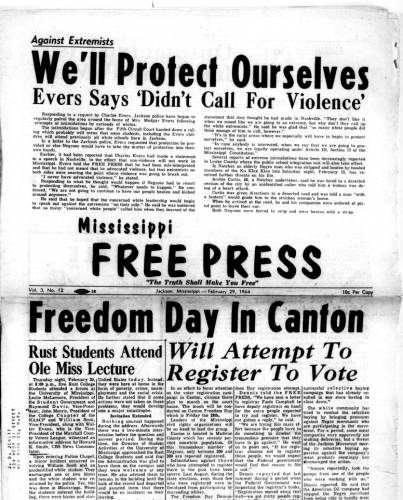 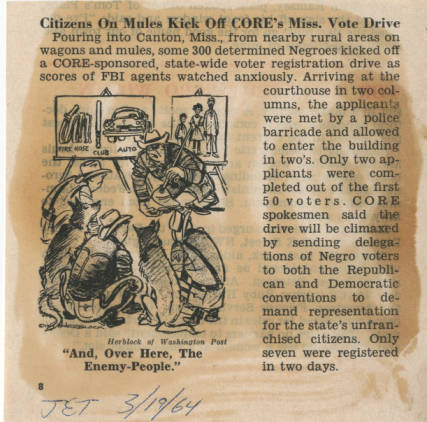