Although a third of Cambridge’s residents were Black, there were only three Black police officers. They were forbidden to patrol in white neighborhoods and could not arrest whites. Police brutality was a common occurrence. Segregation, including school segregation, was total.

Organizers recruited students, who even before the summer had been engaging in protests, one resulting in hundreds of arrests. Such efforts helped gain national attention, especially the attention of the larger Civil Rights Movement which tended to focus on the Deep South.

Project Eastern Shore and the later Mississippi’s Freedom Summer both put significant emphasis on voter education drives, but there were differences. Local whites in Cambridge did not react as violently to voter registration as they did in Mississippi. Some white moderates even openly endorsed voter registration, viewing it as better alternative to the direct action protests in the streets and in public facilities like restaurants and lunch counters. Black voter registration also didn’t threaten the white majority in Cambridge, as it did in the Black Belt South. Local newspapers even reluctantly accepted Bill Henry’s leadership because he was an Eastern Shore native.

Although the summer was relatively peaceful, it was not without incident. On July 26, 1962, Gloria Richardson, Henry, Kennedy, Arnold Goldway from CORE’s Brooklyn chapter, and others went to the White Owl Inn to inquire about its employee diversity. The Inn’s owner, Early Hoge informed them that he had not hired a Black woman to work in the restaurant because it was closed. But right after this exchange, and while the group was still there, Hoge welcomed and served a group of white customers. Local police soon arrived and, according to a complaint made by the NAACP, an officer pushed Kennedy across the room.

At the end of the summer, Tom Kennedy and Bill Henry returned to school but not without the hopes of expanding the project the following summer. Meanwhile, students from Howard University’s Nonviolent Action Group (NAG) and the Northern Student Movement in partnership with Gloria Richardson and other local leaders, worked hard to create a force for local action. Henry and Kennedy authored a proposal to be submitted to SNCC’s headquarters that called for fifteen new volunteers, both Black and white, who would be responsible for conducting student tutorials and adult education, especially on “Negro History” and “Negro Culture.” Before the project could return for a second year, however, local Black leadership decided to change tactical direction, accelerating direct action as its major form of protest. 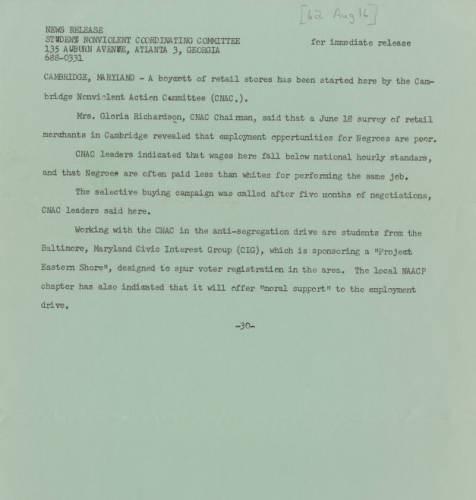 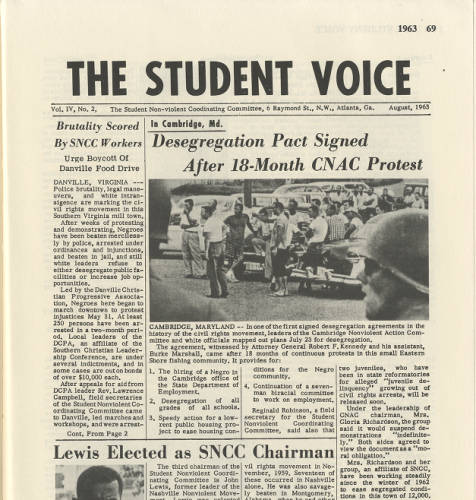 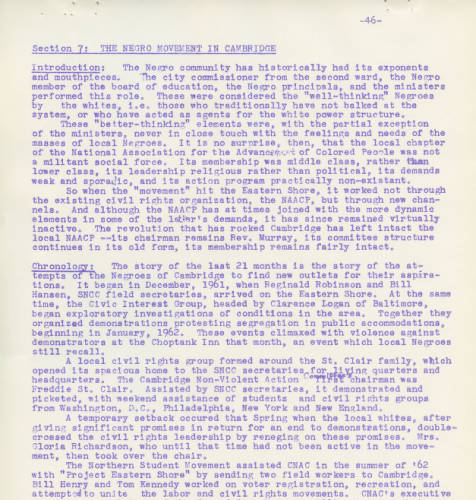