In the city of Pine Bluff, Arkansas on February 20, 1964, a group of SNCC activists demonstrated outside of Ray’s Barbecue. While they were standing there, two armed men approached them. One of them was the owner and was carrying a 12 gauge shotgun. “This is private property,” he told the group. “If you come up the sidewalk, I’ll shoot you.”

In response, Rev. Benjamin “Ben” Grinage, SNCC’s Arkansas project director, told the group to stand still. The owner then asked “Is that the leader?” When Grinage said “yes,” he fired one shot at him. 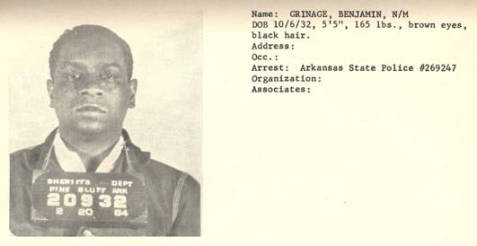 Ben Grinage survived the attack, but he and other SNCC organizers in the Arkansas Delta found their efforts to integrate public spaces “mostly unsuccessful.” So they turned their attention to voter registration projects instead. This work brought better results. They almost doubled the number of registered black voters to a total of 40 percent.

SNCC also encouraged Black people to run for political office in Arkansas. Grinage himself, along with fellow SNCC organizer James A. Bagby, ran for state representative. “They both lost,” fellow SNCC field secretary Bill Hansen reported, “but we were encouraged by voter turnout.” After Congress passed the Voting Rights Act of 1965. Grinage pushed the U.S. Civil Rights Commission to send observers to the Delta to prevent the pervasive fraud. “Continued denial of effective suffrage,” he warned, “can be expected to crode [sic] people’s faith in social justice.”

The Civil Rights Commission scheduled hearings in Forrest City on April 23, 1966, to investigate Grinage’s concerns, but they chose not to hear testimony from citizens in several counties. In response, Ben Grinage pulled SNCC’s support. “We are refusing to participate in any parody of a meaningful investigation,” he insisted. But he changed his mind and presented vivid testimony describing an election process that “systematically disenfranchised Negroes.” He spoke about irregularities in absentee voting and recounted how white officials took much longer to process Blacks’ voter registration forms than those of whites, causing Blacks to leave in frustration after endless waiting. Ultimately, the commission sent two field workers to the Delta to supervise absentee voting and elections.

The work in Arkansas never gained great attention in SNCC. At the end of 1965, chairman John Lewis apologized to Arkansas activists when SNCC’s national headquarters omitted Arkansas from their new four year plan. Increasing racial tensions coupled with mounting financial difficulties forced an increasingly-disillusioned Grinage to admit ”that it would not be unduly pessimistic to expect the liquidation or collapse of Arkansas SNCC within the next few weeks.” Grinage resigned as Arkansas Project Director in the later part of 1966, after Stokley Carmichael replaced John Lewis as SNCC chairman. 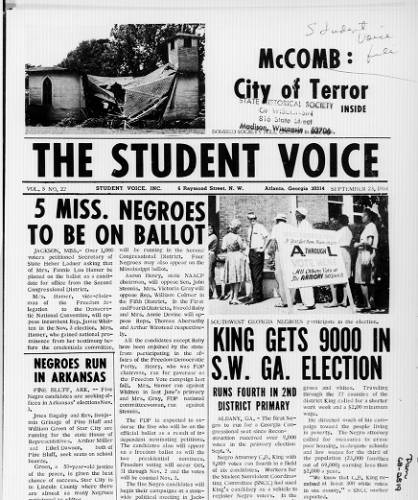