“Often students are not given credit for the things they started and the sacrifices they made in the movement.” – Janie Culbreth

Janie Culbreth’s understanding of the harsh local history of Jim Crow brought her into the Movement well before SNCC arrived in Southwest Georgia. As the daughter of sharecroppers, Culbreth was told by her parents of the threats and harassment they received when they left the plantation for town in the 1930s. “When Black people moved off the plantation,” she remembered, “white landowners considered it an act of defiance and often falsified documents or made unfounded accusations to force their laborers to remain.” 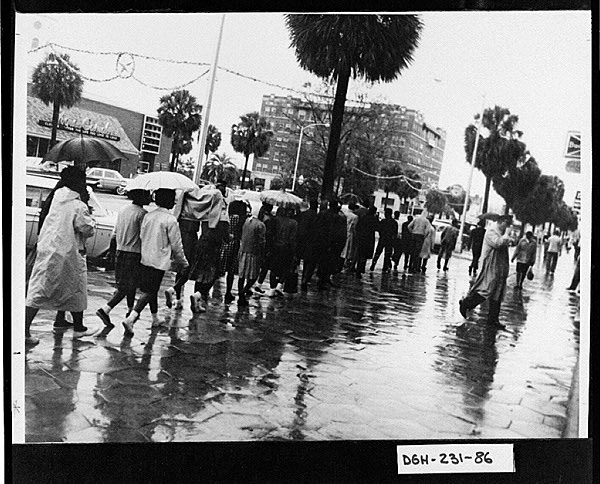 By the end of the 1950s, Black struggle intensified and became increasingly militant. In Albany, Georgia, high school and college students (many of whom were young women) stood at the forefront of organizing efforts. When Culbreth entered Albany State College, she decided that she would no longer tolerate the blatant disregard for African American life and was determined to do something about it.

She attended mass meetings where she remembered Charles Sherrod and others in SNCC discussing all of the things “we couldn’t do because Albany was so staunchly segregated.” She joined others and marched in the first large Albany demonstration in December of 1961. Culbreth described the scene as, “several hundred people–old and young–marched down Jackson Street toward the jail, singing, ‘We shall overcome.’” Culbreth and the other protesters were arrested by the Police Chief Laurie Pritchett.

While she was in jail, she learned that Martin Luther King Jr. was coming to Albany. His presence accelerated protests. Once she was released from prison, Culbreth was expelled from Albany State College because of her participation in the Movement. Following her expulsion, she turned her attention to voter registration and worked for the Movement full-time.

Martin Luther King considered the Albany Movement as one of his earliest failures. However, SNCC activists and local people disagreed. Reflecting on the movement, Bernice Reagon said it “gave me the power to challenge any line that limits me.” Or, as A.C. Searles, founder and editor of the weekly African American newspaper, The Southwest Georgian, put it, “What did we win? We won our self-respect. It changed my attitudes. The Movement made me demand a semblance of first-class citizenship.” For SNCC, the Albany Movement was an early example highlighting the ability for thousands of local people to organize, march, and protest without being led by an external group. It helped teach that there was real power at the grassroots, and Janie Culbreth was one of those teachers.