Much of SNCC’s work, especially the ability of its organizers to stay alive in dangerous and deadly southern communities, depended on local people whose activism preceded SNCC’s appearance on the scene. In Lowndes County, Alabama, John Hulett, one of those people, had been involved in civil rights for almost a decade before SNCC arrived.

John Hulett, born and raised in the Black Belt, moved to Birmingham in 1948 where he joined the city’s NAACP chapter and became involved with the Alabama Christian Movement for Human Rights. There, he went door-to-door encouraging voter registration. After returning home to Lowndes County, he continued his civil rights work.

Hulett became one of SNCC’s earliest supporters in 1965. That same year, he and thirty-nine other people decided to register to vote. At the time, only four Black people were registered in the county. He was first in line, and when the country registrar saw Hulett, he told him, “Don’t you know how to knock when you come into an office?” Hulett quickly replied, “I came here to get registered, I didn’t come here to knock.” Despite Hulett’s resolve, the registrar turned Hulett and the others away.

The hostility and failure at the courthouse gave momentum to the Movement and voter registration efforts. The 1965 Voting Rights Act was passed, and by 1966, 2,800 people–over half of the Blacks eligible to vote–were registered. Meanwhile, Hulett had begun working full-time for SNCC.

In violent Lowndes County, nicknamed “Bloody Lowndes”, protection from racial violence was a top priority. Local residents understood that a Black county sheriff would likely be more committed to the protection of Black people. With the slogan of Alabama’s Democratic Party being “White Supremacy, For the Right,” it did not take long for the idea of an independent political party to sink in. SNCC and supporters like Hulett organized the Lowndes County Freedom Organization (LCFO), an independent political party that would run Black candidates for county level positions. Because of the state’s high rate of illiteracy, Alabama law require political parties to have a symbol. The LCFO chose a black panther as their symbol and became known as “the Black Panther Party.” John Hulett was elected its chairman. 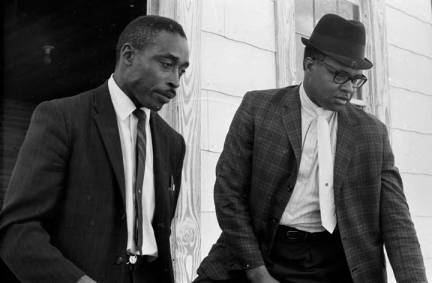 Even though the Voting Rights Act had been passed in 1965, holding a political convention was still dangerous for Black people. When the white sheriff refused to provide protection for the LCFO, Hulett declared, “If the sheriff cannot protect us, then we are going to protect ourselves.” LCFO decided to hold the meeting at the County Courthouse.

Although Blacks were ready to defend themselves, they still wanted to prevent violence. John Hulett and SNCC’s Stokely Carmichael wrote letters to the Department of Justice requesting protection for the convening. A federal representative came to Lowndes to beg LCFO not to hold the convention. But Hulett refused and insisted that if Blacks were attacked they would protect themselves. His determination convinced the Justice Department to let LCFO hold the convention at the nearby First Baptist Church. On the day of the convention that May, 900 people showed up to vote for LCFO candidates.

Despite the tremendous turnout of Black voters in November of 1966, no LCFO candidates were elected that year. However, in following elections, LCFO candidates won positions as county commissioner and coroner. Then in 1970, John Hulett was elected sheriff of Lowndes County on the LCFO ticket. He served in public office, first as sheriff and later as probate judge, for 22 years. 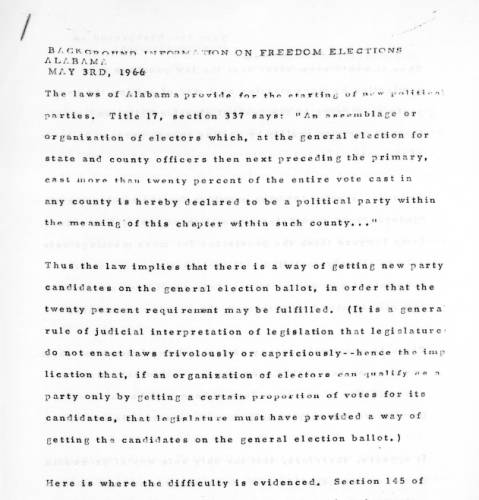 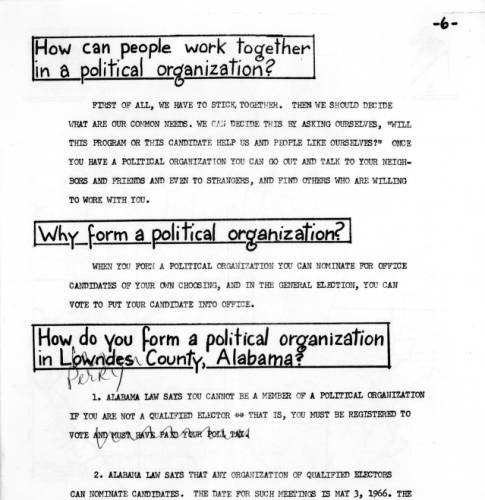 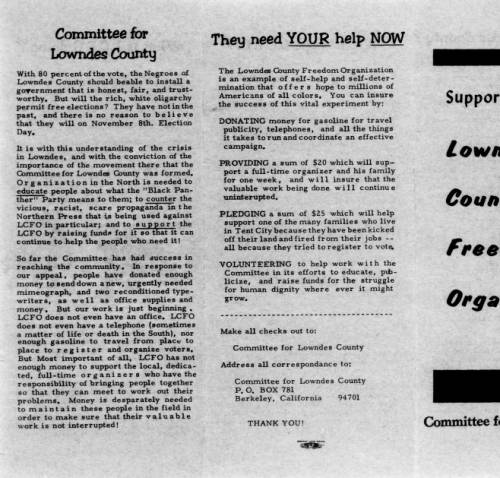