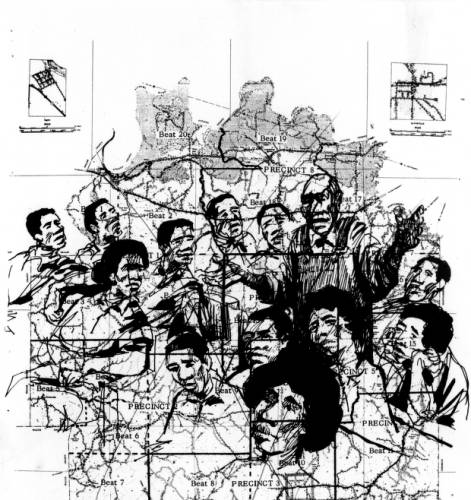 After years of organizing to gain voting rights in Mississippi, Southwest Georgia, and other parts of the southern Black Belt, SNCC was well aware of white supremacist control of political parties in the Deep South. It saw little point in Black Southerners casting their lot–votes in this instance–with those who had long been responsible for the racial violence and injustice that permeated their daily lives, the same people who had fought so hard to exclude them from the political process.

But SNCC still saw the vote as a powerful weapon for change. What was necessary was the kind of power that could come as Stokely Carmichael put it, “only if we organized ourselves and used it skillfully and carefully.” SNCC, therefore, sought to create independent political organizations that would give meaning to the Black vote, especially in the Black Belt counties of the Deep South. “It now becomes necessary,” explained SNCC field secretary Courtland Cox, “to develop a political environment where the organization and the organizational participation of people become more important than [political parties].” Lowndes County was viewed as a testing ground for this new kind of independent politics.

SNCC organizers worked closely with the Lowndes County Christian Movement for Human Rights (LCCMHR), mounting an aggressive countywide drive to register Black voters. For despite being 80% Black, only one Black voter was on the rolls in Lowndes County–John Hulett, the chairman of LCCMHR. SNCC field secretaries went from door to door every day while LCCMHR members tapped into their social networks, which together brought momentum to the Lowndes Movement. With the passage of the 1965 Voting Rights Act in August, hundreds of people dutifully stood in line at the county jailhouse to register to vote. One of the provisions of the act enabled the federal government to assign federal registrars to Lowndes, making it much easier for Black people to register to vote. By October, roughly 2,000 new Black voters were on the rolls.

With this rapid expansion of Black voting power in the county, SNCC introduced the idea of an independent Black political party. SNCC researcher, Jack Minnis, discovered a Reconstruction-era statute that allowed qualified voters “to bring into existence a totally new political party at the county level.” John Hulett remembered, “Stokely Carmichael and Courtland Cox and others got together and told us, according to Alabama law, if we didn’t like what the Democratic party or Republican party was doing in our county, we could form our own political organization, and it could become a political party.”

Local people were enthusiastic about the idea. LCCMHR member Frank Smith, Jr. claimed, “It didn’t make sense for use to join the Democratic Party when they were the people who had done the killing and had beat our heads.” With SNCC’s technical support, local people formed their own organization, called the Lowndes County Freedom Organization (LCFO) and chose a black panther as their logo. John Hulett explained, “the black panther is a vicious animal who, if he was attacked, would not back up. It was saying we would fight back if we had to.”

The LCFO empowered local Black citizens, who realized they could use their collective political might to control the local political institutions. “After forming our own political group today, we feel strong,” proclaimed Hulett, “We feel like we are doing the right thing in Lowndes County.”

Courtland Cox, “What Would it Profit a Man to Have to Vote and Not be Able to Control it?,” late 1965 or early 1966, Civil Rights Movement Veterans Website. 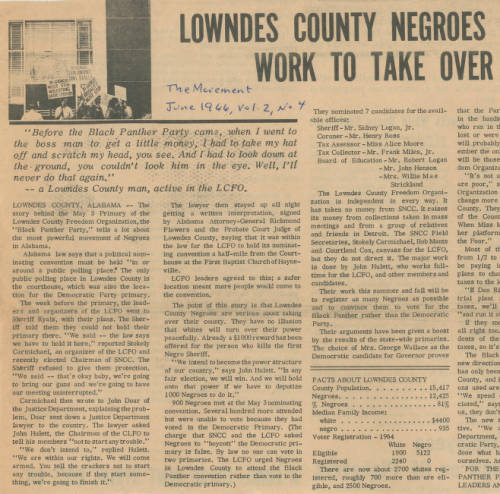