“I know what the pain of hunger is about,” Mrs. Fannie Lou Hamer told a crowd in Madison, Wisconsin. “My family was some of the poorest people that was in the state of Mississippi…we were sharecroppers.”

In 1969, Mrs. Hamer founded the Freedom Farm Cooperative with a $10,000 donation from Measure for Measure, a charitable organization based in Wisconsin. The former sharecropper purchased 40 acres of prime Delta land. It was her attempt to empower poor Black farmers and sharecroppers, who, for generations, had been at the mercy of the local white landowners. “The time has come now when we are going to have to get what we need ourselves. We may get a little help, here and there, but in the main we’re going to have to do it ourselves,” she explained. 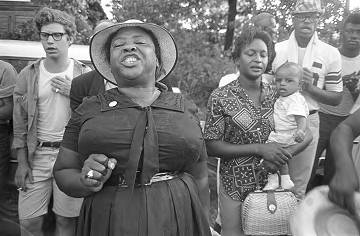 Local and state power structures did little to alleviate the economic burden borne by poor Black and white farmers. The government “considers us surplus,” Mrs. Hamer explained. Using the contacts she had developed in Madison, Mrs. Hamer raised enough money to buy land in Sunflower County.

She worked tirelessly to develop the Freedom Farm Cooperative. The cost of membership for the co-op was $1 a month. But even at that price, only 30 families could afford membership dues; another 1,500 families belonged to the Freedom Farm in name. The co-op planted cash crops like soybeans and cotton to pay taxes and administrative expenses. The rest of the land was sowed with vegetables, like cucumbers, peas, beans, squash, and collard greens, all of which was distributed back to those who worked on the co-op.

Unlike many federal and local poverty programs, the Freedom Farm was dedicated to grassroots participation. Mrs. Hamer had learned through years of organizing around the right to vote that change in Mississippi needed to emerge from the bottom-up. “All the qualifications that you have to have to become part of the co-op is you have to be poor,” she explained. “This is the first kind of program that has ever been sponsored in the country in letting local people do their thing themselves.”

Over the next two years, thanks to her unflagging dedication, the co-op grew into a multi-faceted self-help program. In 1970, the co-op purchased an additional 640 acres for cultivation. The organization also started a “pig bank.” With funds from the National Council of Negro Women, the co-op bought 35 gilts (female pigs) and five boars (male pigs). Over the next three years, the pig bank produced thousands of new pigs to feed impoverished families. Mrs. Hamer was especially fond of the pig bank. “There’s nothing better than get up in the morning and have…a huge slice of ham and a couple of biscuits and some butter. . . I wouldn’t take nothing for our golden pigs.” While in existence, the Freedom Farm empowered poor people in Sunflower County to take control over their economic livelihood.

However, the Freedom Farm was unable to sustain itself. It never received the institutional backing that was necessary to make it a viable organization. And it was not a commercial venture, thus without continuing resources at the federal level, it made it almost impossible to survive.

Susan Youngblood Ashmore, Carry It On: The War on Poverty and the Civil Rights Movement in Alabama, 1964-1972 (Athens: The University of Georgia Press, 2008).

Maegan Parker Brooks and Davis W. Houck, eds., The Speeches of Fannie Lou Hamer: To Tell It Like It Is (Jackson: University of Mississippi Press, 2011).

Maegan Parker Brooks, A Voice That Could Stir an Army: Fannie Lou Hamer and the Rhetoric of the Black Freedom Movement (Jackson: University of Mississippi Press, 2014).

Kay Mills, This Little Light of Mine: The Life of Fannie Lou Hamer (New York: A Dutton Book, 1993).