Seven miles outside of Greenwood, Mississippi on the pitch black Highway 82, SNCC field secretary Jimmy Travis was shot. It was around 10 p.m. on February 28, 1963. Earlier that night, Travis, Bob Moses, and Randolph Blackwell, field director of the Southern Regional Council’s Voter Education Project had been meeting with local organizers in Greenwood. During the meeting Travis had spotted three white men in a car outside, so they decided to leave as quickly as possible and head back to Greenville where Randolph was staying. Travis drove.

The car soon caught up with them and pulling up beside the vehicle Travis was driving, opened fire. A flurry of a dozen bullets shattered both front windows, hitting Travis twice in the neck. Moses grabbed the wheel as the badly wounded Travis slumped forward and rushed him to Greenwood-Leflore County Hospital. After Travis was stabilized and transferred to Jackson University Hospital, the doctor there told the twenty-year-old Travis that he had barely survived the bullet lodged in his spinal cord.

The Mississippi-native had been braving the violence of whites in Mississippi since 1961. He was among the first small group of native Mississippians to commit to the Movement full-time. He dove into SNCC voter registration work in some of the most dangerous places of his home state like Leflore and Walthall Counties. As SNCC moved into the Delta,Travis begin working where the white hold on power was greater than most anywhere in the country.

“When they shot Jimmy Travis,” SNCC field secretary Wazir Peacock explained, “…all hell broke loose for Greenwood.” SNCC workers were operating under the banner of COFO, and soon after the attack, COFO pulled workers from the rest of Mississippi and SNCC’s Southwest Georgia project to intensify their work in Greenwood and Leflore County. VEP Director Wiley Branton declared Leflore County the “testing ground for democracy.” In the media, reporters finally began paying some attention to the Delta. Within a week, northern reporters from the New York Times and Newsweek reported from Leflore County, making the Justice Department pay attention.

In an urgent letter to President Kennedy, SNCC pleaded for federal protection, declaring “we intend to stay in Leflore County until the job is done.” They knew the attack was a specific response to the 150 people who showed up in Greenwood to register that week as well as part of the broad pattern of white supremacist violence directed against civil rights efforts. Fellow SNCC organizer Joyce Ladner explained, “Jimmy’s steel nerves that allowed him to pick up his work and keep going reassured us that we should allow nothing, not even the death of one of our fellow workers to slow down our work.” Inspired by Travis’s spirit, SNCC decided that no act of retaliation could slow their fight. 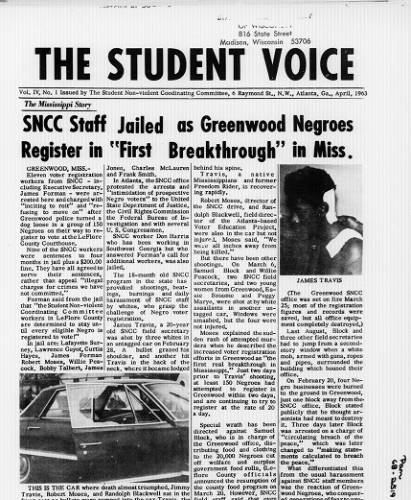