In October 1962, the Arkansas Council on Human Relations requested that SNCC send a field secretary to Little Rock. This request was unusual, but since its formation in 1960, SNCC had grown substantially, evolving from a loose collection of campus-based direct action organizations to a central office in Atlanta with field workers coordinating large projects throughout the South. Members of the Council felt there was a need for an organization like SNCC to work with students in Little Rock following unsuccessful sit-in attempts in the previous two years. In response, SNCC sent Bill Hansen, a student at Xavier University best known for his work on direct action campaigns in Albany and on the Eastern Shore of Maryland.

Assisted by Hansen, students from Philander Smith College and Shorter Junior College formed the Student Freedom Movement. They began sit-ins. On November 8, 1962, activists gathered at Woolworth’s lunch counters to protest the segregation of public facilities. This act led to the arrest of Hansen and SNCC’s Worth Long. Hansen and Long attempted to take seats at a roped off counter when they were arrested. A sign reading, “This fountain is closed in the interest of public safety,” was put up on the counter. They were accused of “refusing to leave a business establishment after being requested to do so by the manager.” They were both released on November 30th on a $500 bond each.

After Hansen and Long were detained, Philander Smith College students marched to downtown Little Rock to protest the arrests while others continued a series of demonstrations at Woolworth’s. Though many students sat-in several times, no arrests were made during these particular protests. Counters were closed immediately after students appeared. Frustrated by student action, Amos Guthridge, head of the Little Rock White Citizens Council, went into Woolworth’s and threatened the students. One student said Guthridge sprayed some liquid on them as they sat at the closed off counter.

These acts of defiance by local students, encouraged by SNCC, ultimately led to the the desegregation of three lunch counters, one restaurant, a bowling alley, and several hotels. The Student Freedom Movement inspired by its success, continued to fight to bring about social, political and economic change in the region.

At first glance, the movement to desegregate Little Rock appears to be just one of the many attempts made by SNCC activists to integrate eating establishments and other forms of public accommodations in the early 1960s. However, when examined much closer it illustrates SNCC’s commitment to grassroots organizing. It shows that change was not possible without the concerted efforts between local people–in this case students–and civil rights groups. 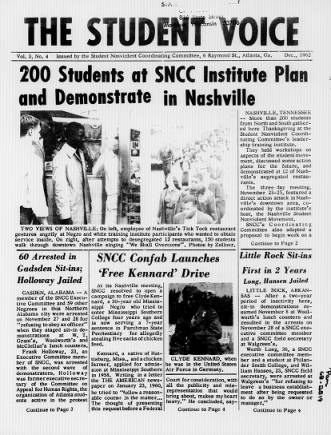