A decade before COFO, in Mississippi there was the Delta-based Regional Council of Negro Leadership (RCNL). Its mass meetings drew thousands. The first was held in 1952 in the all-Black town of Mound Bayou. It was like “a huge all-camp meeting,” recalled Myrlie Evers, “a combination of pep rally, old-time revival, and Sunday church picnic.”

High school marching bands entertained while people ate barbeque and mingled. Its main attraction was William L. Dawson, a U.S. representative from Chicago, who came down to encourage Black Mississippians to register and vote. Dawson’s speech was the first by a Black U.S. Congressman in Mississippi since Reconstruction.

Part of of reason for the emergence of the RCNL was World War II. Roughly 83,000 Black Mississippians had served in the War. When they returned after fighting for democracy abroad, they expected and demanded democracy at home. Veterans rejected the second-class citizenship the Jim Crow South expected them to honor and translated that contempt into political action. Veterans like Medgar Evers, Aaron Henry, and Amzie Moore were RCNL leaders and later COFO leaders who embraced SNCC.

After World War II, even before creation of the RCNL, new NAACP branches and local voters leagues sprouted up across the state, primarily headed up by returning veterans. They organized voter registration drives and engaged in other civil rights activities. Between 1940 and 1952, roughly 17,000 Black people were added to the voting rolls (still only 6 percent of eligible Black voters). Formation of the Citizens’ Council in 1954 slowed even this modest development, but the times were changing and the once closed society of Mississippi was finally showing signs of cracking.

In the midst of this new-found energy, Theodore Roosevelt Mason “T.R.M.” Howard–a prosperous doctor and businessman–organized the RCNL in Mound Bayou. Its activities coincided with increased NAACP activity in the state. Indeed, RCNL became a “homegrown NAACP” for activists like Moore, Henry, Evers, and others who were also local NAACP leaders. And they were much more aggressive than their nominal NAACP leaders in New York.

RCNL’s first organizing effort was a boycott of gas stations that refused to let Black people use their bathrooms. Before long, bumper stickers that read “Don’t Buy Gas Where You Can’t Use the Restroom” were seen on cars driving on Mississippi roads. The organization also protested police brutality, eventually forcing the head of the highway patrol to publicly apologize for the harassment of Black motorists and promise equal protection under the law. The organization brought public challenges to racial discrimination that very few Mississippians thought possible at the time.

At their annual conferences, Black people across the Delta–sometimes more than 10,000–gathered to listen to speeches by Black politicians, like Dawson, Charles Diggs, and Thurgood Marshall, as well as performances by Black celebrities. Mahalia Jackson performed at the RCNL’s 1952 conference.

These massive meetings became a venue for civil rights organizing. RCNL members canvassed the crowds, encouraging people to register to vote. A 1955 edition of Ebony Magazine had a photograph of Amzie Moore handing out voting instructions. The caption noted that a near riot almost took place as people clamored for the hand out. RCNL’s annual meetings marked a changing tide in Black resistance in Mississippi. They were symbols of Black pride and strength emanating from the heart of Dixie. 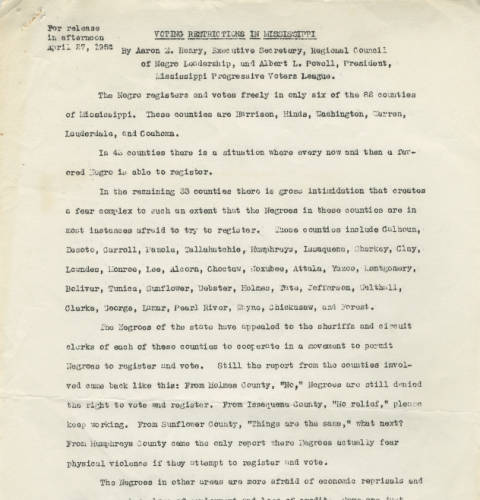 Click here to view document
Program of the Third Annual Meeting of the RCNL in Mound Bayou, May 7, 1954, crmvet.org 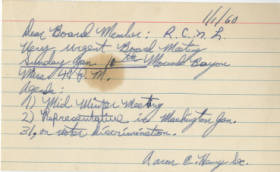