Students for a Democratic Society (SDS)

Students for a Democratic Society (SDS) studied, admired, and sometimes even tried to emulate SNCC’s style of grassroots organizing. The two organizations operated contemporaneously, each with progressive stances on racial and class justice, but their bases varied vastly: at the helm of SDS were mostly white college students, while SNCC, from the start, was a Black-led group that developed local leadership in southern communities.

Northern campuses had been buzzing with support and solidarity actions for the Southern Movement since the Greensboro sit-ins of February 1960. After witnessing SNCC’s founding, an active socialist and University of Michigan organizer, Alan Haber traveled to campuses across the country recruiting people. Sharon Jeffrey, who organized Ann Arbor protests at Kress and Woolworth’s, remembered that SDS looked to the young people in the South for direction. “I don’t know if SDS would have taken off without the Southern students,” she later reflected. “They gave incredible energy to us.”

As influential SDS activist Tom Hayden explained with pride, “I started in the South, not Ann Arbor.” He worked with Bob Moses in McComb on SNCC’s first voter registration project, all the while reporting on the violence and racism he witnessed. In 1962, he returned north and wrote the Port Huron Statement. It became a radical manifesto for progressive students above the Mason-Dixon Line, empowering “SDSers” to put their radical ideas into action at the grassroots like SNCC was doing. “Otherwise,” Hayden recalled, “our criticisms of the labor unions and other groups for not organizing the poor were merely academic.”

Stokely Carmichael agreed. In the summer of 1963 at a NSA meeting, he urged SDS to go out into communities to organize poor whites in particular. SDS’s Todd Gitlin remembered Carmichael’s suggestion as the “direct impetus” for the SDS Chicago community projects. Gitlin felt SDS had “a very strong feeling of wanting to be active in comradeship with civil rights organizers. They wanted us to be doing stuff and they were organizing the poor, so we should.”

SDS and SNCC shared an internationalist perspective as well, which converged when it came to military intervention in Vietnam. Both groups pointed to the imperialist, racist agenda of the United States, and the hypocrisy of targeting governments they deemed “non-democratic” while the US remained violently segregated and unequal. Then in 1965, they demonstrated together at Chase Bank in New York against the South African apartheid regime.

Along with their shared anti-imperialism, SDS and SNCC navigated gender equality within their organizations. In 1965, SNCC activists brought gender oppression to the forefront. SNCC’s Mary King and Casey Hayden wrote, those who are “very hip to the implications of the racial caste system …. don’t seem able to see the sexual-caste system.” SDS soon followed suit, pointing to the internal systems that kept women in inferior and less public positions in the group. A month after the two SNCC women wrote “A Kind of Memo” discussing sexism in the Movement, SDS women demanded a workshop called “Women in the Movement” to address oppression within their group.

As SNCC articulated its position on Black Power and Black autonomy in the late 1960s, SDS questioned their role as radical white students in social change movements. In February 1967, SDS national secretary Greg Calvert wrote, “We owe SNCC a deep debt of gratitude for having slapped us brutally in the face with the slogan of Black Power, a slogan which said to white radicals: ‘Go home and organize in white America which is your reality and which only you are equipped to change.’”

Click Here to View Document Special Supplementary Issue prepared by the SDS in conjunction with the SNCC, The Student Voice, [1960], crmvet.org 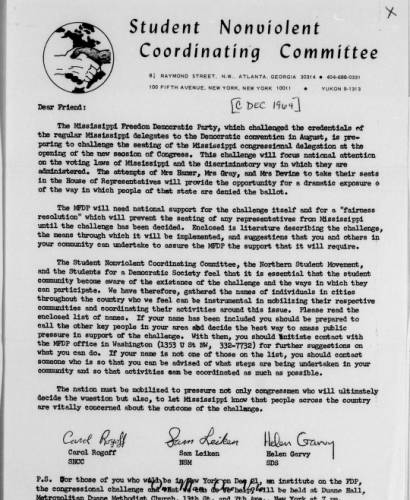