Recalling the status of SNCC workers in the South, Mary King explained that “whatever small protection we had, came through news reports that brought our actions to the attention of the nation and broke the cover of secrecy.”

While a student at Ohio Wesleyan University, King organized a student committee on race relations in solidarity with the student sit-ins. Almost immediately after her graduation in 1962, she was drafted into the Movement by Ella Baker, who offered King a field foundation grant to work as a human relations intern for the Young Women’s Christian Association (YWCA). In this Atlanta-based role, King traveled to white institutions across the South initiating discussions about race relations under the rubric of conversations on academic freedom. She organized interracial workshops that deconstructed systems of race and racism.

While working with the YWCA, King volunteered at the Atlanta SNCC office on weekends. Here, she became familiar with SNCC’s executive secretary, Jim Forman, who felt her academic experience in English literature would be an asset to SNCC’s Communications Department. In June 1963, King began working with SNCC communications director Julian Bond in the Atlanta office. That same year she spent Christmas in Atlanta’s “Big Rock” city jail for joining an impromptu sit-in; this experience gave her insight into the dangers of working as a SNCC organizer.

She saw her work in the Communications Department “as critical to [SNCC’s] purpose as organizing demonstrations or voter registration.” King, along with Julian Bond and a small staff that included Dorothy Miller (Zellner), pressed the national news to report on arrests, beatings, night riders, bombings and other acts of terrorism. King also attempted to use her communications network to hold local law enforcement across the South accountable for collaborating with racist mobs or using violence. She sometimes posed as a journalist and encouraged other SNCC field staff to do so as well, since she knew the “presence of a reporter at a jail or a telephone inquiry from a newspaper was often the only step that let a local sheriff know he was being watched.”

Still Julian Bond and King worked to cut costs further since many calls were incoming from field staff and other offices. One strategy they used was designing a list of surnames using the names of trees that would correlate with particular offices. Thus, when they got an incoming collect call from a John Chestnut, they would know to refuse the charges and call Ruleville, Mississippi on the WATS line.

King’s work in communications was made even more difficult because mainstream media often chose not to report on the Southern Civil Rights Movement; they were “suspicious of being ‘used’ by propagandists,” and they did not consider threats to black lives newsworthy, especially in the rural areas where SNCC staff most often worked. In order to get movement activities published in national newspapers, King and Julian Bond took “sworn affidavits documenting circumstances that might otherwise seem beyond belief.”

In 1964, when SNCC began discussing what their future as an organization would look like, Jim Forman invited SNCC staff to write position papers in preparation for an organization-wide meeting in Waveland, Mississippi. King, along with Casey Hayden, wrote a position paper on the “Position of Women in SNCC” that raised what they considered the subordinate status of women in some projects. In some respects this was the first shot of what became known as the women’s rights movement.

Mary King, Pt. F, “The SNCC Women and the Stirrings of Feminism,” We Shall Not Be Moved Conference, 1988, Trinity College. 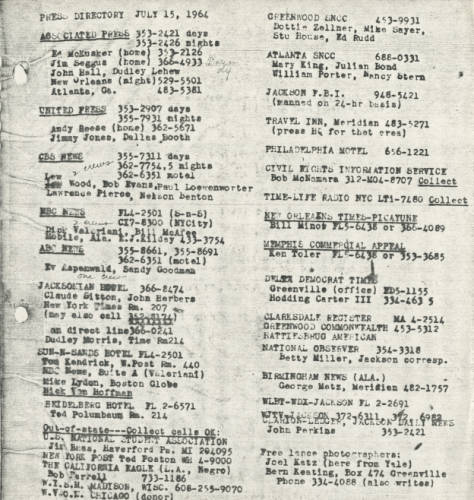