When the sit-in movement erupted in February 1960 and spread rapidly across the south, Ella Baker, then SCLC executive director, immediately recognized the potential of this outbreak of student protest for change. She thought that protest leaders should meet one another and persuaded Martin Luther King to have his organization put up $800 to bring them together for a conference at her alma mater, Shaw University in Raleigh, North Carolina.

A call signed by herself and Dr. King was sent to 56 schools and 58 southern communities urging that delegates be sent to the conference, which would be held on Easter weekend of 1960. Rev. King hoped that a student wing of SCLC would emerge from the gathering. Baker was emphatic in the call: “Adult Freedom Fighters will be present for counsel and guidance, but the meeting will be youth centered.”

Charles “Chuck” McDew, a student and protest leader at South Carolina State College in Orangeburg was one of the students to receive this signed call. He did not know who Ella Baker was but Orangeburg spiritual leader Reverend McCullum, who was advising student protesters in the city, told him, “if Miss Ella Baker said she wants you to do something, you can put your life in her hands.”

126 student delegates attended. And SNCC was born as a result of this meeting. The largest contingent came from Nashville where the student movement was strongest and most committed to nonviolence. There, Diane Nash, John Lewis, Marion Barry, Bernard Lafayette, James Bevel and others who would become movement legends had been mentored by Rev. James Lawson, who had served almost 3 years in prison as a conscientious objector to the Korean War. They brought knowledge and experience from Nashville that helped shape the culture and tactics of SNCC from the very beginning. Julian Bond recalled being “very taken by their group personality. Not just the panache and confidence they had in each other, but how far they had already gone.” Their militant challenges to segregated Nashville inspired those who had been working on nonviolent direct action protests in their home communities as well.

At the conference, the young activists were able to meet each other, share strategies and experiences, and feed off each other’s energy. Diane Nash remembered, “We felt a real kinship with the students who were working in other cities, to bring about the same things that we were.”

The first issue of The Student Voice, June 1960, WHS

Initial debates about the principle of nonviolence had their start at the Shaw conference. The Nashville group pushed for a total commitment to nonviolence. Diane Nash felt that others put faith in their message because, as she put it, “success is very persuasive.” Where disagreements occurred, Ella Baker “bridg[ed] the divide with her guidance.” Although she smoothed over the debate at Shaw, the question in nonviolent tactics was only partially resolved and would resurface throughout SNCC’s history.

SCLC representatives kept up the pressure for the students to form a wing of their organization. Ms. Baker, however, urged the students to discuss forming their own organization. And in the end, out of the conference, a temporary Student Nonviolent Coordinating Committee was established. Ms. Baker gave them space in Atlanta at the SCLC office. Initially the group decided that its main purpose would be to maintain lines of communication between the students, help to coordinate actions, and form a strategizing collective. Almost immediately a newsletter–The Student Voice–was designed, produced and began circulating to campus groups. Creation of a “Coordinating Committee” composed of two representatives from each campus groups was agreed upon.

The conference and the formation of SNCC signaled that youth were part of civil rights leadership in an unprecedented way. 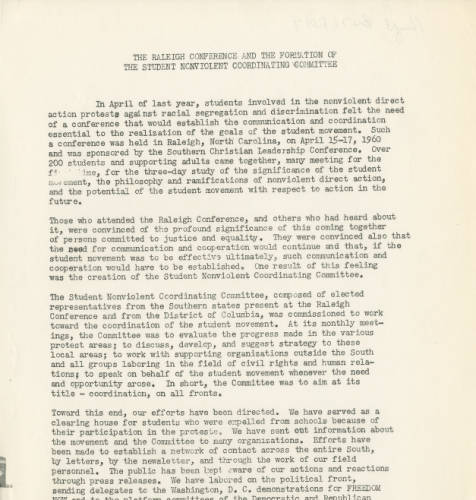