SNCC’s organizing work in the Deep South couldn’t happen without funds, however minimal. Funding voter registration and economic development projects, keeping the Sojourner Motor Fleet cars running, paying for WATS phone lines, publishing The Student Voice and regular press releases, maintaining a photography department, a print department, and a research department–and bailing people out of jail–all took money. Even though most SNCC field secretaries received only $10 a week ($9.64 after taxes, and even that inconsistently) payroll costs added up. By the end of 1964, it took around $15,000 every two weeks for SNCC to pay its staff members. While field secretaries canvassed door-to-door deep in the rural South, SNCC’s northern offices–and none more so than New York–raised the money that kept SNCC going. 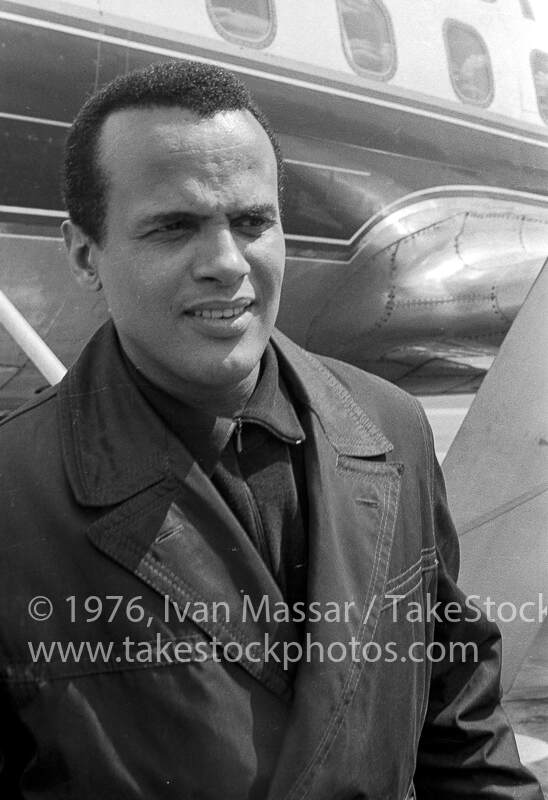 The New York office was Jim Forman’s brainchild, set up in 1963 to be SNCC’s center of fundraising. Julie Prettyman was its first director. She and Bob Moses had grown up together in New York City. They had gotten together on one of his visits home, after he’d started working for SNCC in Mississippi. While they were saying goodbye, Moses gave Prettyman a poster for a SNCC benefit concert at Carnegie Hall, featuring Harry Belafonte, with an appearance by the SNCC Freedom Singers. She asked who was selling tickets. Moses’ answer led her to the SNCC office downtown to help sell tickets. Once there, Ella Baker convinced her to start volunteering even though she and her husband had a 4-month-old baby. By the summer of 1963, Forman had recruited Prettyman to start working full-time for SNCC as the director of the New York office.

From its headquarters in a grungy office on lower Fifth Avenue, staff at the New York office raised money through house parties, benefit concerts, regular mailings, and face-to-face meetings with potential donors. It was no accident that many of the country’s wealthiest–and more liberal–citizens lived in New York City. “We must face the fact that the big money is here,” reported Elizabeth Sutherland (Betita Martinez), who became the second director of the office, “and until other Northern offices are set up to raise equally big money, the burden is on N.Y.”

SNCC depended on support from movie stars, artists, and musicians–Harry Belafonte, Sidney Poitier, Dick Gregory, Sammy Davis, Jr., Mahalia Jackson, Ben Shahn, Lorraine Hansberry, Nina Simone, Rita Moreno, Theo Bikel,and more–to bring in funds. Some of these celebrities made appearances at SNCC house parties and performed at benefit concerts (especially Belafonte and Gregory) and/or donated their artistry to posters and photography books, all to be sold in support of SNCC’s work. In the fall of 1964, Harry Belafonte did a string of house parties in Washington, D.C., Chicago, Boston, and New York, pulling in anywhere from $9,000 to $15,500 per night. House parties were SNCC’s “easiest and one of the most fruitful ways to raise funds.” All that was needed was a host, a home, a program (which was optional), refreshments, and someone to make a pitch. A few SNCC workers were often also present to bring the reality of SNCC’s work to those gathered. 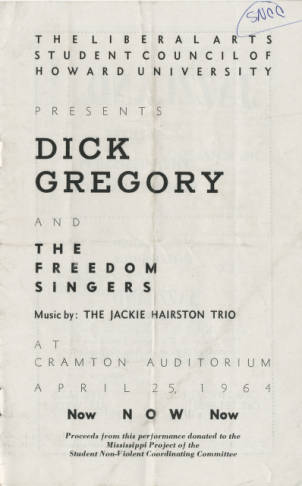 Some long-time New Yorkers who worked in the office brought with them important networks from their work with progressive national and international campaigns over the years. These could be tapped for support of SNCC’s work.

The New York office’s golden rule of fundraising was to ask “by whom and for what and in that order.” Many people were willing to donate a hundred or more dollars to SNCC, but it was “very important that the right person ask for the contribution.” Fundraising letters were tested against each other to see which got a better response. In 1965, a letter signed by SNCC’s chairman, John Lewis, was sent out to an equal number of people as one signed by Nathan Schwerner, the father of the murdered civil rights worker. The one that brought the best response then went out to the 250,000 people on SNCC’s mailing list.

When Elizabeth Sutherland, previously an editor at Simon & Schuster publishing house, took over the New York office in 1964, she encouraged the staff of northern offices to think of themselves as organizers, both for fundraising and community action. Does the office keep SNCC’s supporters informed of what is going on? Is the mailing list up to date and accurate? Does the office continuously follow up with fundraising contacts? Are letters and telephone calls promptly responded to, questions answered? Are the files kept in usable order? Sutherland saw those questions as central to an efficient and effective fundraising operation.

The job of the New York office was support, and they were under strict instructions by Jim Forman not to engage in local political organizing activities in New York. But SNCC staffers from the South regularly circulated through New York, either for speaking engagements, a doctor’s visit, or some R&R. The New York office had a network of people on Long Island and in Manhattan who would open their homes to SNCC workers. Julie Prettyman kept track of everything in a notebook that had telephone numbers for stars, artists, field secretaries. “Everybody,” she explained, “because that was the only way I could manage.” 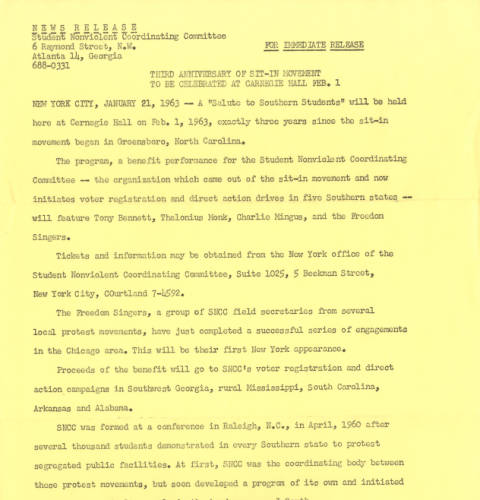 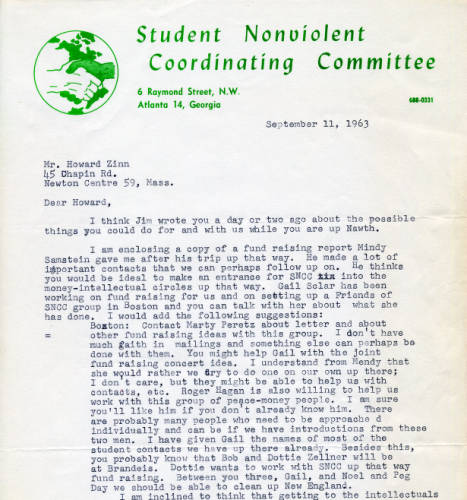 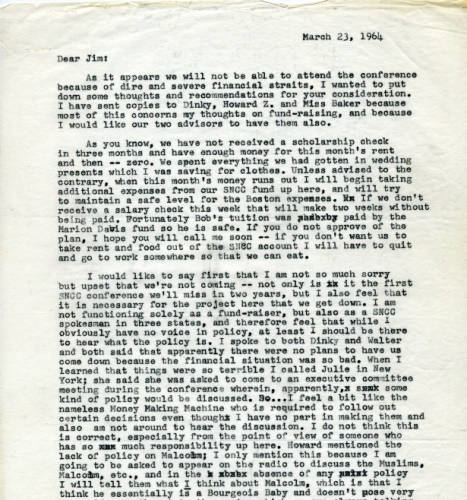 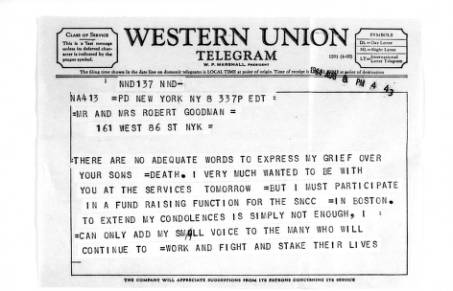 Click here to view document
"Who Does What in Atlanta," Document describing the responsibilities of SNCC staff in the Atlanta Office, undated, crmvet.org 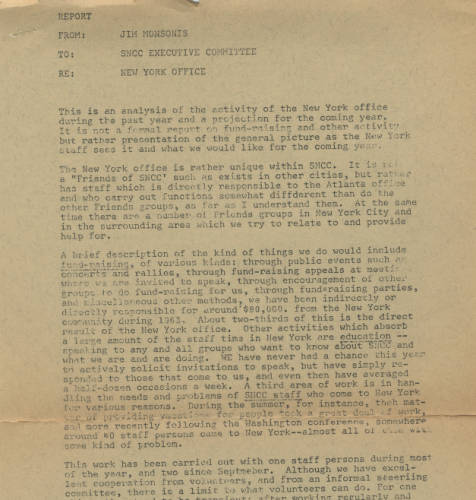