By 1963, SNCC’s publishing needs were quickly outpacing the organization’s capabilities. Mark Suckle, who operated SNCC’s offset press and other printing machinery, was in over his head with the organization’s demands for printed material. “I must do more and more in conjunction with production and propaganda,” he wrote in a job description. “Not only must I print, but I have to layout, compose and take photographs.” Suckle was two weeks behind and “sorely overworked.”

As SNCC’s presence in the South expanded, the organization’s headquarters in Atlanta became a hub for information flowing from SNCC field projects to the rest of the country. Field secretaries stationed in the rural areas of the Mississippi Delta or Southwest Georgia filed monthly reports to the Atlanta office, where Julian Bond, SNCC’s communications director was based. The organization also invested in its own WATS (Wide Area Telephone Service) line, like an 800 number that allowed SNCC workers to make unlimited long-distance calls at a flat rate. The WATS line facilitated the flow of information from the field to the Atlanta office and tied together SNCC’s far-flung projects throughout the South.

All this information streaming into Atlanta was processed by SNCC’s communications department, which oversaw the “production and distribution of all materials related to publicity.” The communications department churned out an incredible amount of published material, not only for publicity purposes, but also for SNCC’s organizing efforts at the grassroots. The department’s main task was the production of The Student Voice, SNCC’s own weekly newspaper, which covered movement events that rarely made it into the national newspapers. Julian Bond and Dorothy Miller Zellner, and later Mary King, spent most of the week gathering stories and writing articles for the Voice, while, by 1963, Suckle then prepared the layouts and printed and folded the paper. All hands were on deck at the end of the week, when it was time for collating, folding, packaging and distribution. “We had to write it and print it and then take it to the bus station,” recalled Bond. “That was a big, big challenge.” 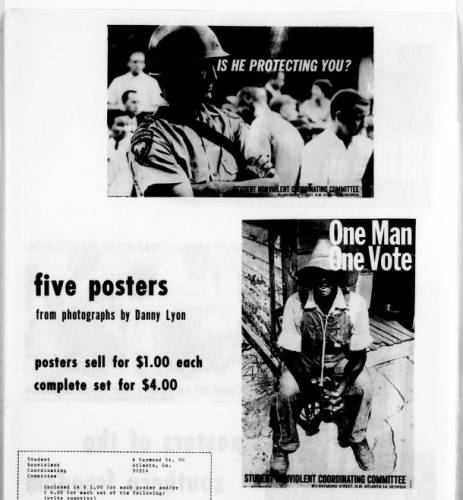 The department also issued news releases and special reports. Unlike the Student Voice, these reports were for immediate release and mimeographed right in the office. They often described, in a clear and unembellished style, the violent and illegal retaliation that SNCC’s voter registration projects faced on a continual basis. For instance, when Jimmy Travis was shot in the neck and shoulder in Greenwood, MS, in March 1963, the communications department issued an immediate release giving details of the attack, biographical information on Jimmy Travis, and background on SNCC’s involvement in the Mississippi Delta. The release worked its way through SNCC’s northern network of supporters and given to press contacts that the organization scrupulously maintained. These types of releases shined a light on the state-sponsored terrorism occurring in Mississippi and other areas of the Deep South.

In October 1963, in order to keep up with the ever-increasing flow of information coming in and out of the Atlanta office, SNCC established the Student Voice, Incorporated. Thanks to an anonymous $15,000 donation, SNCC was able to revamp its printing machinery and hire a larger staff to help the beleaguered Mark Suckle and Wilson Browne. The Student Voice, Inc. handled almost all of SNCC’s publishing and propaganda needs. It produced over half a million Student Voice’s, as well as other types of printed materials for primarily Northern consumption. It also produced materials that were essential to SNCC’s on-the-ground organizing, like voter education worksheets, educational primers and comic books, leaflets, flyers, and announcements.

SNCC had one of the most expansive and effective communications networks in the country. Throughout the early sixties, particularly, it cultivated relationships with the national news media and built Friends of SNCC groups in major cities and on college campuses around the country. Its published materials, especially the Student Voice, fed this network with key information about the organization’s grassroots community organizations, which was usually hidden from view. It not only generated essential publicity and funds, but also helped protect SNCC field secretaries–and the local people with whom they worked–as they faced violence from local police and politicians, as well as the Klan. SNCC’s news organization and publishing played a crucial role in the organization’s success. 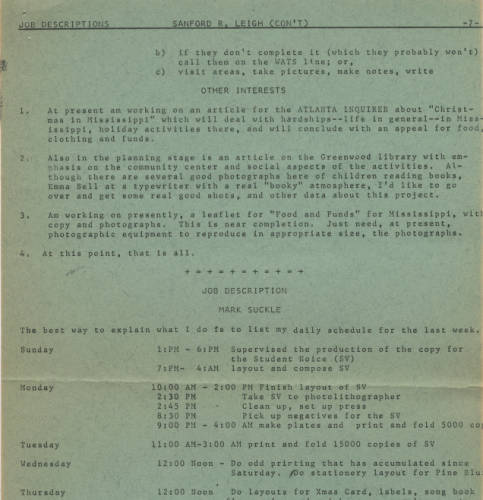 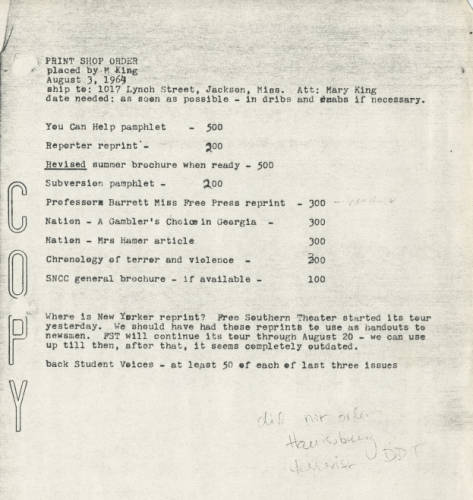