When SNCC field organizers arrived in Americus, Georgia in 1963, local organizing groups gave them a supportive welcome. Amanda Bowens was a student at Sumter County High School when she decided to become involved with this group of young organizers. She was just what SNCC was looking for in their work. She was already an activist and well-known in her community, in part for her unshakable dedication the Movement despite her young age. She became a tenacious organizer who daringly spoke and sang the truths of what it meant to both organize and live as a young, local black person.

Bowens had a determined way of pushing SNCC to stay true to its principle of equality among organizers. In a 1964 SNCC strategy meeting, she sat among both rural folks in faded clothes and the educated college students, who soon took over the discussion with complex philosophical debate. Bowens took the floor: “My name is Amanda Bowens…and I’m from Southwest Georgia…I don’t understand everything you’re arguing about, but I do know I’m Black and I’m down here suffering!” The room erupted in applause at the humbling reminder that lofty, abstract thought often detracted from SNCC’s mission to truly work from the bottom up. The audience began calling out, “Break it down, brother!” to a speaker who was losing the audience with abstract language. As a fellow SNCC worker recalled, “Amanda had reminded us what we were really all about.”

As a SNCC activist, Bowens was arrested and jailed for two months. Being a Black woman in Southwest, Georgia, no aspect of Bowen’s life went without harassment. On an occasion when she and her friends used a courthouse restroom designated for white women, a local sheriff and dragged the women out of the space.

When Amanda was nineteen,  John Perdew, a fellow SNCC field-worker and white student from Harvard, proposed to her. The couple packed their car with a bridal party of movement friends and left for Denver, Colorado, where interracial marriage was legal. When headed back to Southwest Georgia, they received hate mail from people who saw this decision as a ploy to test interracial marriage bans in Georgia. Their marriage became national news.

Bowens, in her true fashion of never backing down, stated, “I love John and I am not marrying him to test the state of Georgia, Florida or any other place. I love John and I will work closely with him because I am tired of this evil system telling me whom to love, where to stay, and where to sit down.”

Bowens was also a song leader for the Americus voter registration and school desegregation campaigns. She was a founding member of Americus Trio with Virginia David and Sammy Mahone, whose compelling lyrics spread throughout the Movement. Her lyrics certainly reflected the way she chose to live her life as young, passionate activist, “We ain’ scared of nobody, ‘cuz we want our freedom now.”

In her later life, Bowens Perdew was honored for her role as a movement songwriter and song leader by the Smithsonian and the White House. Bowens Perdew was a gifted story-teller who kept the SNCC legacy alive by telling stories of the Movement. 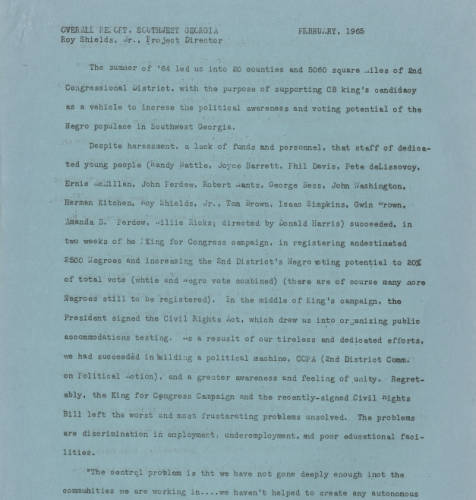 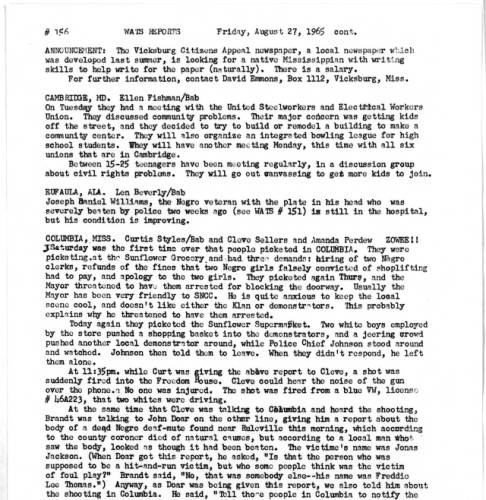