John Perdew had “no idea at all of any kind of violence and daily oppression that millions of people went through,” when he joined SNCC’s Southwest Georgia project in early 1963, “but then I got my ass kicked.” Later that year, he and other SNCC workers in Americus, Georgia, targeted the Martin Theater on Forsyth Street for desegregation. Although the manager was willing to let Black people use the theater’s front entrance, the local white community was incensed by this attempt at compromise. So one evening, a group of roughly 250 people, mostly high school students, marched on the theater, chanting and singing “We Shall Overcome.” The police violently broke up the protest. Perdew, along with Ralph Allen and project director Don Harris were arrested and charged with insurrection–an offense punishable by death in the state of Georgia. The trio remained in prison for three months until a federal court overturned the charges. The SNCC workers were released, only to be beaten and arrested again on other charges.

John Perdew was raised in Denver, Colorado. As high school senior, he visited apartheid South Africa, where he met a Black South African who told him, “Please tell America, we are not free.” Three years later, the junior at Harvard University heard about SNCC’s project in Southwest Georgia, which was organizing around the right to vote and demonstrating against the segregation of public accommodations. Perdew traveled to Albany, Georgia, where he joined SNCC field secretaries in nearby Sumter County. He was shocked by what he saw, and his desire “to do something adventurous and different” was quickly replaced by a desire to challenge the unjust system he saw around him. After his first arrest, Perdew decided to stay Georgia rather than return to Harvard.

While in Americus, Perdew focused on addressing the racist hiring practices that kept local Blacks from decent employment and from receiving fair wages. He formed a coalition with Mrs. Winnie Ragins, a local domestic worker and activist, to investigate the local Manhattan Shirt Company factory. Despite its workforce of 800, the factory only employed Blacks in menial positions, mostly janitors. Perdew and Ragins threatened to organize a domestic workers strike; black women in Americus predominantly worked as domestics in white households, while white women worked at shirt factory. A domestic strike would leave the entirely female workforce at Manhattan Shirt Company without childcare. The strategy worked, and a few weeks later the factory hired the first African Americans in its history of operation in Americus.

Perdew also worked on SNCC’s research team, dedicated to uncovering the structural racism in American society. He wrote several research papers for SNCC, including one that analyzed the impact of policies of large corporations on racial oppression in the Deep South. In 1965, Perdew noted that “the political and economic power of the men who run and profit from Sears, Roebuck & Co. and the Standard Oil of California stretch like the tentacles of an octopus deep into Mississippi and Alabama.” His thorough research gave SNCC concrete examples of how institutions seemingly far removed racism in the Deep South actually had a stake in the status quo.

Later in life Perdew participated in a taskforce to establish the Americus Civil Rights Institute and Interpretive Center to honor the legacy of the Sumter County Civil Rights Movement in the 1960s. 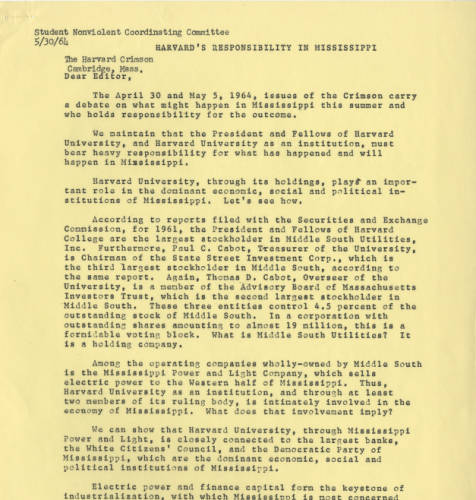 Letter to the Editor of The Harvard Crimson, “Harvard’s Responsibility in Mississippi,” May 30, 1964, Congress of Racial Equality, Southern Regional Conference Records, WHS