When SNCC came to small towns like McComb, Mississippi, people like Aylene “Mama” Quinn were essential to their survival and taught them much. Quinn was a longtime member of the NAACP and had been volunteering her restaurant, South of the Border, for underground meetings since the mid-fifties. “Mama Quinn is kind and good to everyone, but more than that, she is a towering figure of strength. She can’t be intimidated,” recalled SNCC’s Mendy Samstein. She made sure there was food to eat and a place to meet in McComb, and she was excited about the new energy the young SNCC folks brought in 1961.

Born in Walthall County, Quinn grew up wrestling with the complexity of living in a system of white supremacy. As a child, she observed the relationship between her grandfather and his white half-sister and would have conversations with her grandmother about Blackness in America, “She would say that the 4th of July wasn’t for black people. Said in May, that’s when we was free.” This was probably a reference to the Emancipation Proclamation which, though issued January 1, 1863, reached various parts of the South on different dates.

In 1943, Quinn moved to Biloxi, Mississippi for her first job. The U.S. Army had recently designated the Keesler Army Airfield in Biloxi as a World War II training support site, and Quinn went to work in their laundry department. While in Biloxi, Quinn joined the NAACP and got interested in voting. By the time she came to McComb in 1953, she was already a registered voter.

McComb’s NAACP had taken on a new kind of energy by the mid-fifties. Movement stalwarts Webb Owens and C.C. Bryant increased membership by over 50 percent, and many of those new members were World War II veterans or small business owners like Aylene Quinn. However, it was also a dangerous time for NAACP members in Mississippi, who were constantly terrorized by white community. Quinn remembered, “If you were a member of the NAACP you kept it kind of a secret. If you had any kind of a job or anything you couldn’t let it be known.” So, when Bob Moses arrived in McComb and brought new life to voter registration efforts, it was just what she hoped to see happen in her town.

Quinn supported more than voter registration, however. Many parents were furious about their children’s involvement in the Burglund student walkout, calling SNCC a “bunch of troublemakers.” But Quinn stood by her daughter Carolyn and demanded that the students be readmitted without signing the pledge.

She also stood by SNCC with the revival of movement activity in Southwest Mississippi during Freedom Summer in 1964, despite risk to herself and her family. “Three years ago she was one of the first to welcome Moses and lend him and the SNCC workers her support. Her cafe has always been open–despite the threats. And this summer, again she leads the community,” said Samstein. Her restaurant became the location for secret meetings between the Council of Federated Organizations (COFO) and local businessmen. They would arrive in the back of a delivery truck and use passwords at a side entrance to enter unnoticed. There, they organized food and housing committees to assist the volunteers and raised enough money to build a community center for Pike County.

This fearless support from Quinn didn’t come without a cost. On September 20, 1964, her house on 304 Summit Street was bombed. Thankfully, her children, who were home at the time, escaped with only minor injuries. When McComb police accused Quinn of bombing her own home, she ridiculed the charge as defying common sense. One day after the bombing, she traveled to Washington D.C. to meet with Justice Department officials and privately with President Lyndon Johnson (who met with her against the advice of his top advisors) and demanded increased federal protection for Black people in McComb and the South. Mama Quinn continued to stay active in the Movement, acting as a pillar of resilience in her community for years to come. 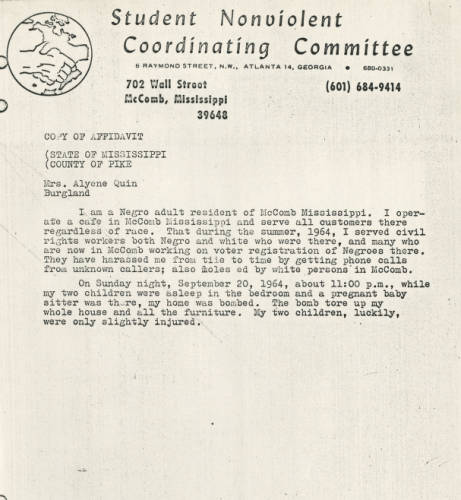 Copy of affidavit by Aylene Quinn describing the harassment she received for her voter registration work, 1964, Candy Brown Papers, WHS 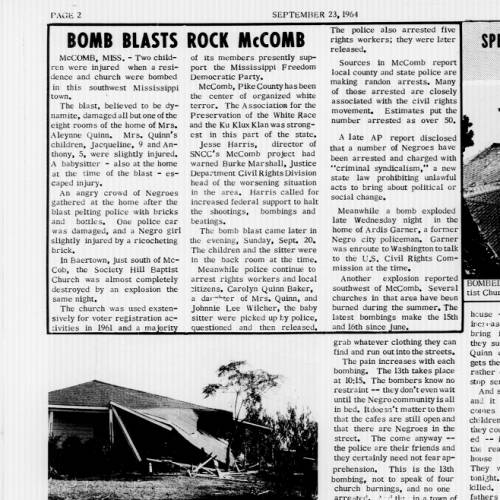 Mendy Samstein, “The Murder of a Community,” The Student Voice, September 23, 1964, WHS 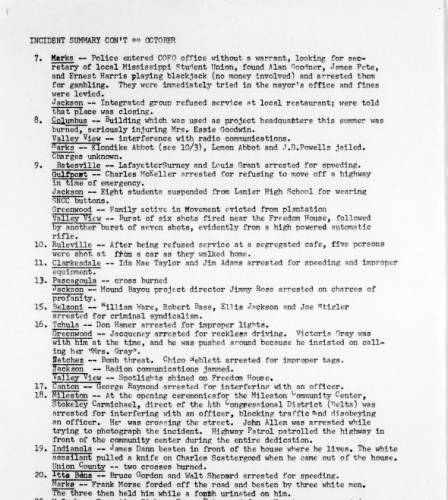 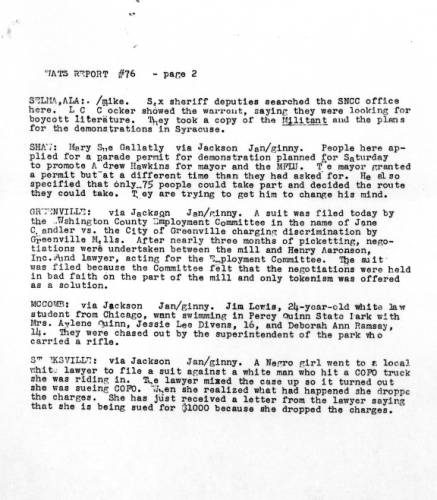 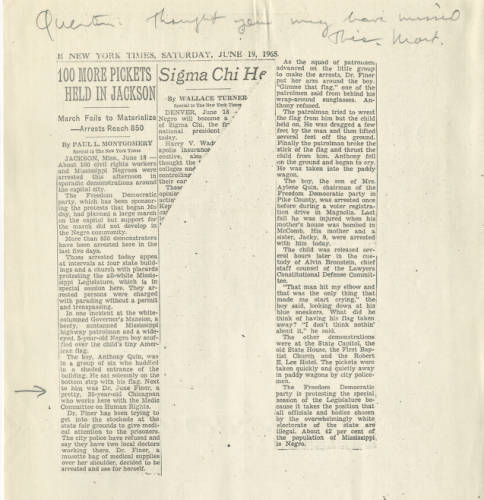