“So many people have become involved in some way in some kind of political activity… it (SNCC) has made people understand and realize that they can have an effect on their own lives.” – Betty Garman

As a student activist at Skidmore College, Betty Garman spoke out against hysterical charges of Communism or redbaiting by organizing campus forums with the National Student Association in the late fifties. When the sit-in movement burst onto the scene on February 1, 1960, she was shocked by the news that African American students in the South were unable to be served at lunch-counters. “There were three of us…[who] decided to do something at Skidmore… so we held some meetings,” Garman remembered, “And we got two and three hundred students to come to these meetings and they were like huge debates about the sit-ins and what was happening in the South and what role and responsibility Northern students had.” Garman along with other undergraduates decided to picket a local Woolworth’s as a gesture of solidarity with the Black students who were protesting in the South.

Through her activities with the NSA, Garman met other students who formed the northern-based Students for a Democratic Society, and in graduate school in Berkeley, California, she continued organizing as a member of SDS. Her graduate studies of social movements in the United States kept her focus trained on racial inequality. She formed an organization in Berkeley to support the southern movement and through it met SNCC’s Executive Director Jim Forman and staff member Casey Hayden.

In March 1964, Garman moved to Atlanta to work for the SNCC office full time, as she put it, working “behind the lines to support the front line assault on the segregated South.” Under the guidance of Jim Forman, Garman, along with others, organized resources from the North, reached out to students across the country, allocated funds to support southern subsistence, as well as organized the Friends of SNCC groups.

1964 set the tone for organizing efforts during the later years of the Movement. Initially, Garman recalled, SNCC activists focused on “gaining the right to vote, the right to travel on an interstate bus…” The 1964 Civil Rights Act and the Voting Rights Act of 1965 addressed some of these concerns, like outlawing segregation in public accommodations and sending federal registrars south. But after 1964 Garman witnessed how economic inequality became the overarching issue. “How do people live?” she recalled, “So what if you can sit at the same lunch counter with a white man, but if you don’t have a quarter to buy the hamburger, what good is the lunch counter?” These questions moved to the forefront of SNCC’s thinking as the organization turned increasingly towards Black Power in 1966. 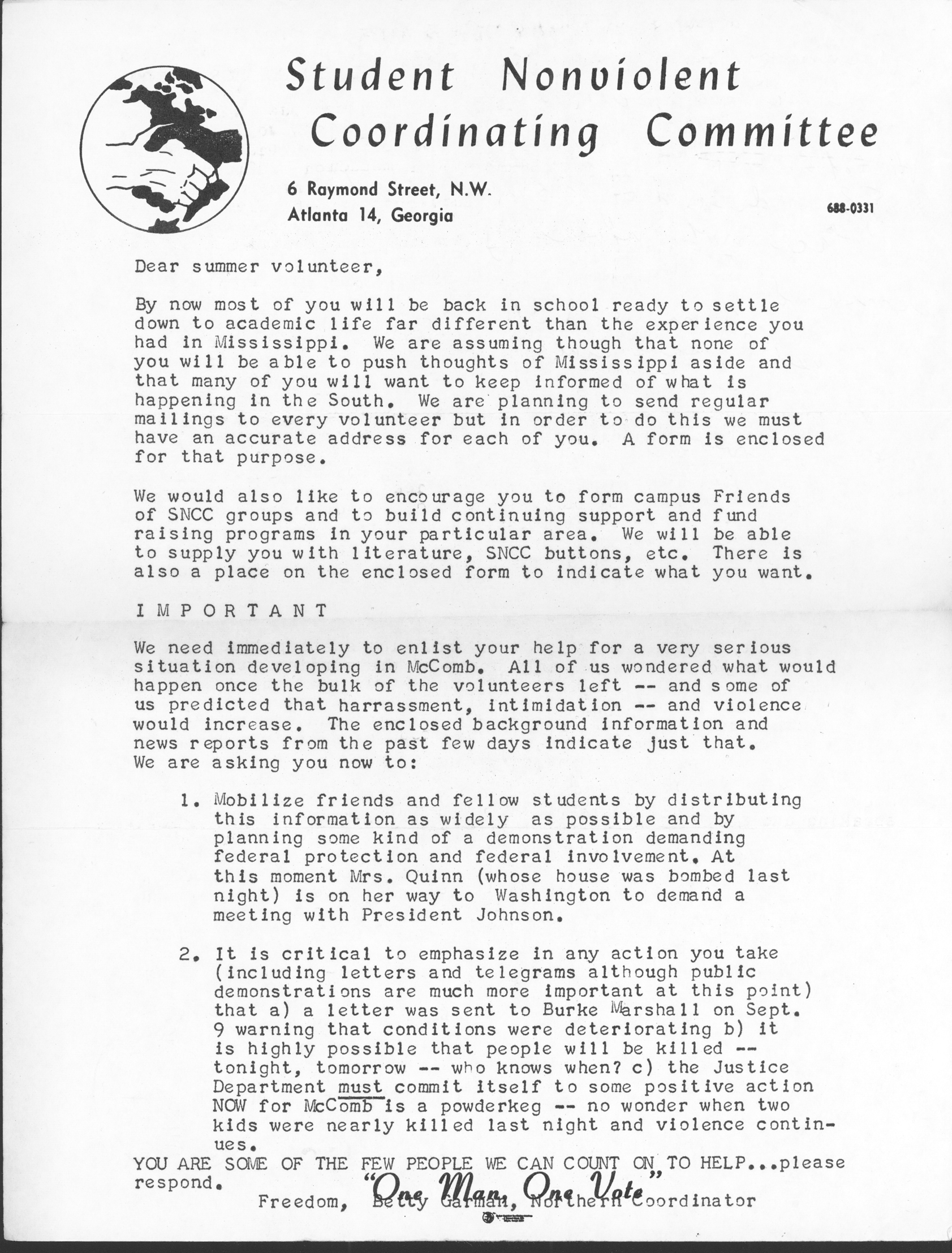 Click Here to View Document
Betty Garman, “A Note to the SNCC Staff about the Northern SNCC Staff,” November 1964, crmvet.org