By 1963, SNCC had morphed from a coordinating body for college-based protest groups into a cadre of full-time organizers, invested in voter registration campaigns throughout the South. The organization had more voter registration workers on the ground than any other civil rights organization, yet received less than $24,000 of the $500,000 distributed by the Voter Education Project (VEP). Jim Forman and the rest of SNCC’s administrative staff in Atlanta tried desperately to raise outside money to support those in the field, but it was hard to come by–especially since SNCC refused to falsely portray itself as a leader-centered organization, even for purposes of gaining more media attention.“We wanted to [raise money] on the basis of our program,” noted Forman, “rather than any single image of any leader’s personality.” 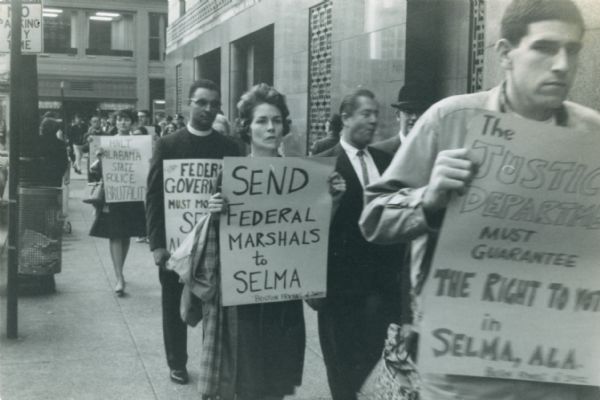 A protest held by the Boston Friends of SNCC in support of federal protection for civil rights workers in Selma, Alabama, 1965, Dorothy M. and Robert Zellner Papers, WHS

“Here was a group of young people,” Forman continued, “willing to renounce comfortable jobs, to devote themselves on the basis of real personal sacrifice … and it seemed they wouldn’t be able to do it.” SNCC needed its own fundraising machinery, so Forman hired Sandra Cason (Casey Hayden) as SNCC’s first northern coordinator. “This position was a good fit for me,” remembered Hayden, who “had an enormous number of contacts … through the Y(MCA), NSA (National Student Association), SDS (Students for a Democratic Society), the Northern Student Movement.” With Hayden’s guidance, SNCC established several “Friends of SNCC” groups, which laid the foundation for an expansive northern network that publicized SNCC’s voter registration work, too often hidden through deliberate disregard by the media. When Casey moved to Mississippi to work with SNCC’s projects there, Constancia “Dinky” Romilly replaced her in 1963.

Activists in the North were eager to help in any way they could. The main Friends of SNCC chapters were based in Chicago, Detroit, San Francisco and Washington, D.C. (focusing on government relations). New York Friends of SNCC was coordinated by the New York office. As SNCC’s major fund-raising office outside Atlanta, the New York Office’s role extended beyond the usual Friends of SNCC activities.

Betty Garman, a graduate student at UC Berkeley who became northern coordinator in the fall of 1964, felt that “support work … was one key to SNCC’s survival as a militant, front-line organization.” The Friends of SNCC chapter in the Bay-area, led by Mike Miller, quickly emerged as one of SNCC’s most important supply lines. “We hosted speakers on campus, held fundraising parties in wealthy Berkeley Hills featuring SNCC Freedom Singers,” remembered Garman. Fannie Rushing and Monroe Sharp in the Chicago office and Dorothy Dewberry in Detroit also played a central role in garnering support for SNCC in the North. By the summer of 1964, there were a dozen groups operating in the area that raised “anywhere from several hundred to $10,000 a year.” The group also publicized movement activities, which were often ignored by the national news services. Supporters canvassed local communities and distributed newsletters. They occasionally organized support demonstrations to pressure the federal government to ensure the voting rights of disenfranchised African Americans and to protect registration workers and local supporters in movement hotspots.

Friends of SNCC chapters were essential to SNCC’s work in the Deep South. As information was relayed outside of the South through a web of contacts, these groups mobilized when local activists were attacked. If a church was shot into because of its movement involvement–or local residents beaten or jailed while attempting to register to vote–the Friends of SNCC network was set into motion. A long-distance call from Chicago or Newark or New York City would put the local authorities on notice that someone outside the South was aware of the incident.

In the winter of 1962-1963, in an effort to derail the movement, local governments in the Mississippi Delta shut down federal surplus commodities distribution programs, causing thousands of poor Black families to go without food or heat that cold winter. Michigan State students Ivanhoe Donaldson and Ben Taylor were arrested in Clarksdale, Mississippi, after driving a truckload of food, clothing and medicine to the Delta. Famed comedian Dick Gregory flew in 7 tons of food on chartered planes. Support groups jumped into action, shipping tons of food and clothing to Mississippi. The New York Friends of SNCC group, with the help of Ella Baker, even organized a star-studded benefit concert headlined by Harry Belafonte, that also included the SNCC Freedom Singers. These efforts allowed SNCC to form a distribution program that linked political participation with food on the table. The local movement grew stronger throughout the winter and early spring as hundreds of hungry sharecroppers attempted to register to vote, even though some were thrown off the plantation where they worked as a result of their attempt.

By the summer of 1964, SNCC’s northern network was a well-oiled machine that not only raised funds for the organization but pushed it into the national consciousness. Betty Garman proudly recalled that “at the height of SNCC’s work, we could organize large coordinated demonstrations in fifty northern cities simultaneously, with only a few days notice.” And she added, “That was before cell phones, email, or any social media.” Friends of SNCC groups continued to support the organization into the late sixties, but fundraising became increasingly difficult as the media vilified SNCC for its Black Power stance.

Mary King, “Getting out the News,” Hands on the Freedom Plow: Personal Accounts by Women in SNCC, edited by Faith S. Holsaert et al. (Urbana: University of Illinois Press, 2012).

Click here to view document
Betty Garman Robinson, "A Note about the Friends of SNCC Groups -- What They Do?," 1964, crmvet.org 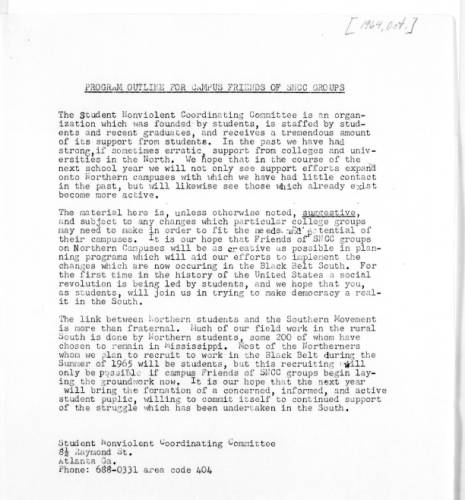