The House Un-American Activities Committee (HUAC) was born in 1938 and was soon followed by the Senate’s Internal Security Subcommittee (SISS) and a whole host of “little HUAC’s” at the state level. All professed the same goal–to uproot and destroy communist activity within the United States. However, under the direction of right wing politicians and unapologetic white supremacists, these investigative agencies cast their nets wide.

By the time SNCC came into existence, “Red-baiting,” shorthand for this extremely vicious
form of anti-communism, had devastated many Black organizations, including the Southern Negro Youth Congress (SNYC) that had formed in the mid-1930s. Early SNCC activists occasionally succumbed to the anti-communist rhetoric and practices that stained the era. In October 1960, SNCC disinvited Bayard Rustin–an openly gay Black activist with former communist ties–from its fall conference after the AFL-CIO threatened to withdraw its funding for the organization. Jane Stembridge, who organized the conference, resigned from SNCC in protest.

However, experience taught SNCC that anti-communism only handicapped the Movement. First, the accusation was flung loosely at anyone deemed left of the AFL-CIO. Second, movement activists judged people on the basis of how helpful they were to the Movement. And lastly, civil liberties were closely linked to civil rights.

Much of this was learned on-the-ground where white supremacist power accused SNCC workers of being communist stooges in an effort to advance the civil rights struggle. The young activists also saw the destabilizing effects of red-baiting at the national level, as major civil rights organizations engaged in bitter disputes over supposed communist involvement in the Movement.

Civil rights organizations, especially those active in the South, were constantly harassed by HUAC, SISS, and their local imitators. The Southern Conference for Human Welfare (SCHW)–an integrated organization that supported President Roosevelt’s New Deal programs–was one of the first to be red-baited. HUAC labeled the organization a communist front with an anti-American agenda, even though SCHW only called for moderate reforms like ending the all-white primary and the desegregation of public accommodations.

Other organizations that worked for integration in the forties and fifties were similarly red-baited, including the NAACP. Racist politicians, led by Mississippi senator James Eastland, equated the NAACP’s legalistic strategy with a communist takeover of the organization. The organization weathered attacks from HUAC and SISS, and southern state investigative agencies, determined to discredit the NAACP by linking it to communism.

While charges such as those leveled against the NAACP were generally baseless, they seeped into the political culture of the United States. By the mid-fifties, anti-communism was the political norm for conservatives and liberals alike. And many civil rights organizations adopted an anti-communist position to safely align themselves with the politics of the time. The NAACP purged its membership of suspected or accused communists. Other organizations followed suit, either explicitly banning suspected communists from their organization or refusing to associate with them for fear that they too would be red-baited.

SNCC came under constant attack for using attorneys from the National Lawyers Guild–a group considered too far left by the liberal establishment. SNCC’s position was simple, practical, and straightforward: Guild attorneys were willing to handle the cases of SNCC workers. “SNCC will work with anybody who supports our programs, shares our goals, honors our principles, and earns our trust,” explained Stokely Carmichael, adding, “Hey, you don’t worry about the Communists, worry about SNCC. We way more dangerous, Jack.” 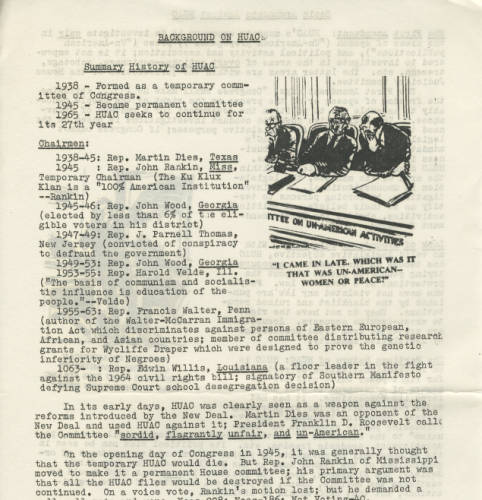