Through her involvement in SNCC and the Freedom Movement, Connie Curry was able to find her “sense of place.” She thought of it as the “beloved community.” 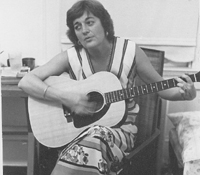 Curry was the daughter of Irish immigrants and spent most of her early years in Greensboro, North Carolina. While a student at Agnes Scott College in Atlanta in 1953, she became the southern regional chair of the National Student Association (NSA). Then, after finishing graduate school at Columbia University, Curry landed her first job as a field secretary for the Collegiate Council for the United Nations (CCUN). Her work for CCUN and NSA, she explained, paved “the way for [her] to continue working in the civil rights movement,” in addition to teaching her the skills to be an effective ally and advocate for oppressed communities.

After leaving CCUN, Curry was appointed the first director of the NSA’s Southern Student Human Relations Project. The Project aimed to bring Black and white students together under the premise that, with exposure to a common set of “values and encouragement from like-minded people, they could be rallied to launch the tides of social change.”

After attending SNCC’s founding conference that April, Curry and Ella Baker were chosen by student representatives and the SNCC executive committee to be the adult advisors for the organization. This also made them members of SNCC’s executive committee. Curry, only 23 at the time, credits her appointment as an “adult” advisor to the committee’s awareness of her ability to use the “field grant money [from NSA’s Southern Project] to help the fledgling movement.” For instance, she often paid SNCC phone bills and allowed Julian Bond to run off press releases and copies of The Student Voice in the Southern Project’s office in Atlanta.

Curry also worked as an observer for SNCC sit-ins. She would go and monitor demonstrations, sit-ins, and marches and then report on them to sympathetic groups and the media. Julian Bond cited her work as providing “an audience for SNCC that might not have been there otherwise.” Curry left SNCC and the NSA to work for the American Friends Service Committee (AFSC) in 1964. Under the AFSC, she worked primarily in Mississippi and Alabama for the next eleven years as a field representative advocating for school desegregation. She continued her activism in Georgia afterwards, working to combat systemic racial injustice in the criminal justice system.

Curry authored several books on the Civil Rights Movement, including Aaron Henry: The Fire Ever Burning, Mississippi Harmony: the Memoirs of a Freedom Fighter, and Silver Rights.

Constance Curry, “Wild Geese to the Past,” Deep in Our Hearts: Nine White Women in the Freedom Movement, edited by Constance Curry, et al. (Athens: University of Georgia Press, 2000), 3-35. 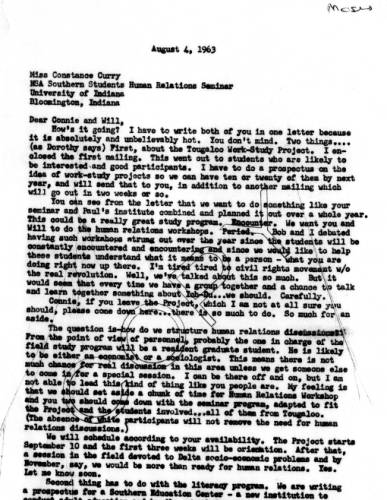