In March 1965, Alabama native, George Ware spoke at a SNCC conference in at Tuskegee Institute where he insisted on the necessity to “change the social and economic disenfranchisement of Negroes in the State of Alabama.” Roughly 85 students from colleges like Selma University, Alabama State College, Miles College, and more were in attendance. According to Ware, the conference was designed to be a “Spring Board for further advancement of Negroes students and for Alabama’s success toward freedom.” One of SNCC’s major goals during this time was to rebuild its support on southern Black campuses, which once supplied the organization with most of its personnel.

Less than a year later, Ware was heading the campus travelers program for SNCC. In the early part of 1967, he organized a speaking tour for Stokely Carmichael that included visits to Black campuses in Nashville and other southern cities. Ware also organized a Black Power conference seeking to attract students from Fisk and nearby Tennessee A & I State University. He quickly met with determined opposition from Fisk officials and was forced to move the conference to the Chapel of Saint Anselm, an Episcopal student parish directed by Father James Woodruff, a Black clergyman who became a strong SNCC supporter.

In the summer of 1967, Ware along with Carmichael generated some controversy within and outside of the organization over an unsanctioned trip to Cuba. Ware contended that while they were attending the Dialectics of Liberation Conference in London, he and Carmichael were invited by a representative from Cuba to attend the Organization of Latin-American Solidarity (OLAS). They assumed that SNCC’s Julius Lester was already attending the conference in Havana as an observer, so they said, “we couldn’t officially attend as official SNCC representatives but that we would like to go.” Ultimately, Ware and Carmichael went to Havana thinking “there would be some of the more outstanding revolutionaries from all over the world,” and they “would not have such opportunity again.”

At OLAS, Ware and Carmichael were taken by how the nationalization of industry enabled Cubans to address problems of illiteracy, poverty, and poor healthcare. They were inspired by the policy initiatives put forth by Fidel Castro to help his people and took a position in SNCC’s name stating they “were opposed to the exploitation of peoples around the world, especially people of the Third World by the United States” and that oppressed people need to take up arms to fight oppression. The later part of this statement by Ware and Carmichael encountered a great deal of criticism from within SNCC, less because of content than because of procedure. Their statement did not come from discussion and debate within the organization, and it was a major statement of policy and politics. This tension between rhetoric and policy would continue to plague SNCC during its existence.

After SNCC, Ware went on to work for the Black Music Association (BMA), the first Black music trade association. The BMA’s board applied political pressure to the music industry that resulted in the hiring of Black executives by major record labels. Following his stint with the BMA, Ware continued his education and cultivated an interest in African religions. He was initiated in Haitian Voodoo at the LePeristyle Haitian Sanctuary in Mariani, Haiti eventually achieving the highest level of priesthood. 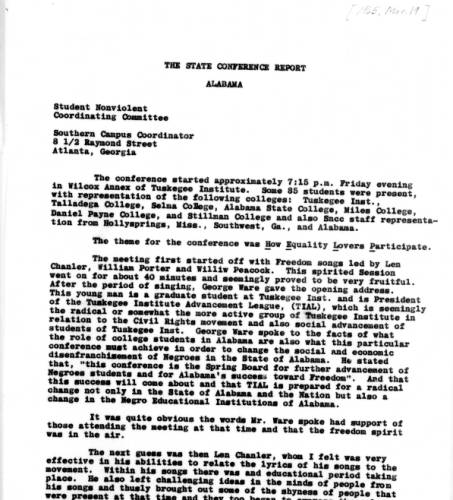