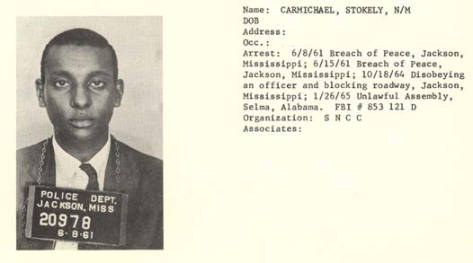 Stokely Carmichael’s June 1966 Black Power declaration in Mississippi intensified international interest in SNCC, and, along with SNCC’s public opposition to the Vietnam War, began to redefine SNCC as something more than a traditional civil rights organization. Carmichael had concluded, as he put it in a May 1967 London speech at a Dialectics of Liberation conference, Black people were struggling against a “system of international white supremacy coupled with international capitalism.”

By the beginning of 1967, “the majority of SNCC’s members considered themselves part of an emerging Third World coalition of revolutionaries who were anticapitalist, anti-imperialist and antiracist,” explained former SNCC program secretary Cleveland Sellers.

Increasingly Carmichael was articulating the view that Black communities in the United States were “internal colonies.” That radical view expressed in London led to an invitation from Cuba’s High Commissioner in London to visit Cuba, and the trip was timed to coincide with a conference of the Organization of Latin American Solidarity (OLAS) scheduled for July. The organization had been formed as a counter to the U.S.-backed Organization of American States (OAS).

In a very real way, Carmichael was not only following his and SNCC’s evolving political thinking, but also the footsteps of other African American activists and intellectuals who had been visiting Cuba since Fidel Castro’s 1959 liberation of the island.

Carmichael had by the time of his visit to Cuba stepped down as chair of SNCC, though he still maintained close ties to the organization. SNCC itself had been invited to the conference and its delegation (Elizabeth Martinez, Julius Lester, and George Ware) was given observer status. Carmichael was not officially part of the SNCC delegation. He was, however, made an “honorary delegate.” This distinction, in part, reflected Carmichael’s movement away from formal ties to the organization in which he had played such a vital leadership role. His Cuba visit had not been authorized by SNCC, nor were the journeys to other nations he took after the conference.

Touring the island, with Castro driving a jeep—a journey full of political exchanges—the two men made a strong personal connection although they were not always in complete political agreement, especially with regard to race. Castro, however, speaking to the conference, declared that Latin American and African American solidarity was “the most natural thing in the world.”

In some respects, the Cuba visit and conference provided SNCC and Carmichael with their first substantive contact with African liberation movements. Delegations representing freedom movements in South Africa, Zimbabwe, Mozambique and Angola as well as Egypt, Guinea and Algeria were all there as observers. He and the SNCC delegation “were surprised” at the conference’s awareness of Black struggle in the United States “and of SNCC in particular.”

After the conference, Carmichael traveled to China and Vietnam. In China, he met Shirley Graham Du Bois, the widow of W.E.B. Du Bois, who would be very important to Carmichael’s complete commitment to Pan-Africanism and his decision to settle in Ghana and Guinea.

Cleveland Sellers with Robert Terrell, The River of No Return: The Autobiography of a Black Militant and the Life and Death of SNCC (University Press of Mississippi, Jackson and London, 1990), 188.