“Deep in my heart, I do believe that, We shall overcome one day.” Folk singer and guitarist Guy Carawan introduced the Freedom Movement to these words in early April 1960 at a workshop for student sit-in protesters at the Highlander Folk School. Carawan, the director of music at the center, taught the students “We Shall Overcome,” and other songs like “Keep Your Eyes on the Prize.” Carolanne (Candie) Anderson, a white exchange student at Fisk University, remembered that it “was just so incredible to have those songs, because they were so perfect.” It was there that Guy met Candie. In 1961, they married, and together the couple continued to greatly impact music culture within the Movement. 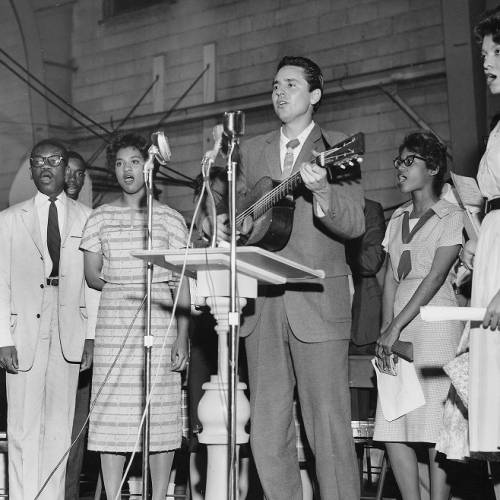 During the early fifties, Guy was an aspiring folk artist, inspired by both the politically-tinged music of the labor movement and southern folk music. California-born Carawan wanted to travel the South and visit his family homeland, since his parents were from the Carolinas. When he told Pete Seeger his plans, Seeger encouraged him and recommended that he visit Highlander Folk School because it was a place where music was used as a part of people’s struggles.

In 1959, Carawan joined the Highlander staff. For a while, he was the driver for Septima Clark, which he described as an incredible experience. Clark took him under her wing as she introduced him the Movement. But his main role was as music director for Highlander workshops. Through his involvement at Highlander, Carawan became involved in the earliest days of the Civil Rights Movement. He even attended SNCC’s founding meeting at Shaw University and brought with him many songs that would become movement standards. 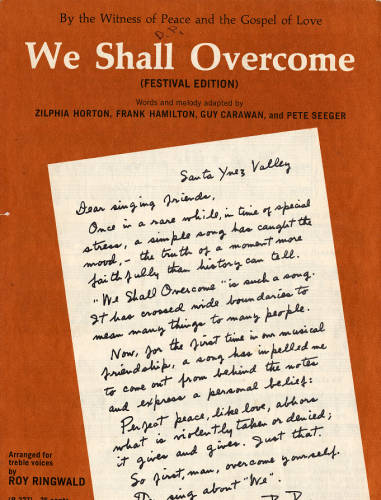 Candie was also from California. In the spring semester of 1960, she took part in the Pomona College exchange program with Fisk University in Nashville. Her timing, she felt, was “just so lucky, because I happened to go in January of 1960. And … that semester between January and June was just such a critical time in Nashville.” She took part in the sit-in movement and was arrested with many other students, including Diane Nash and Bernard Lafayette. The jails in Nashville were segregated, and she was separated from her Black peers. Despite being physically separated by race and gender, music, hearing voices in song was a vital way of maintaining contact. As Candie put it, “music made a connection, which was very important.”

Between 1961 and 1965, the couple traveled throughout the South hosting workshops to encourage local communities to embrace the Movement’s music. They stressed that the workshops were not concerts, and local people were encouraged to participate. Guy also used his connections as a folk musician to support movement musicians, like SNCC’s Freedom Singers. Candie remembered her husband’s role as “helping them to get to places where they’d be heard, getting the Freedom Singers up to the Newport Folk Foundation … He was just very generous about giving support to other people.”

The Carawans produced six long-play albums documenting the Civil Rights Movement with songs and oral history and published two books on freedom songs. Most of this material is available through Smithsonian Folkways and New South Books. 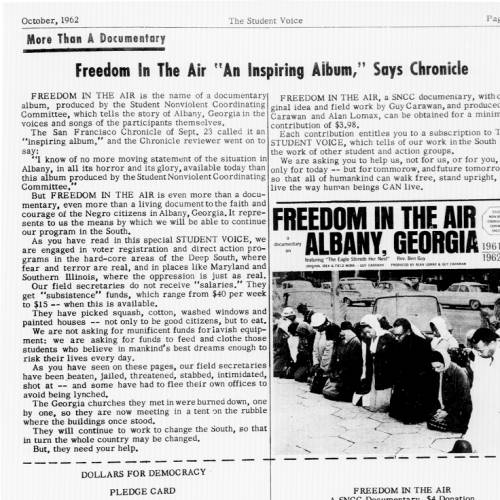 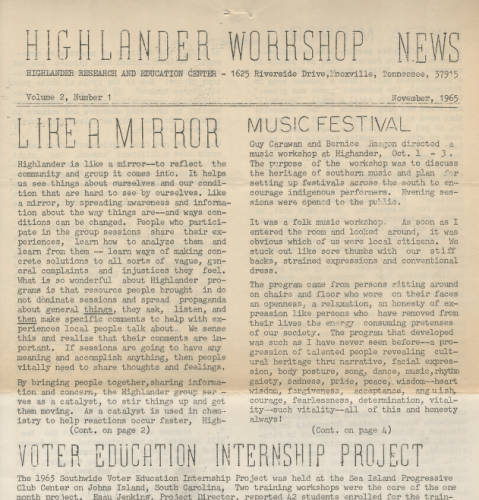 Candie Carawan [37:25], Volume 24, “Highlander, SSOC, and Organizing in the White Community: We Knew That We Were Not Free,” SNCC 50th Anniversary Conference, 2010, California Newsreel