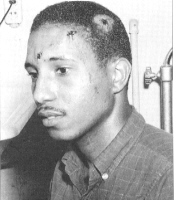 A photograph of Bernard Lafayette after he was beating in Selma, AL, 1963, crmvet.org

“I’ll take Selma,” Bernard Lafayette told Jim Forman on the phone. As one of the young activists emerging from the nonviolent Nashville Movement and the 1961 Freedom Rides, Lafayette had come to understand that “it [was] not something you read that causes you to change … It’s when you see other individuals fight against the system, and insist that justice will come, and believe that justice will come, even if you have to lose your life.”

So, in the spring of 1963, Lafayette and his new wife, Colia Liddell, went to Selma where he became the official director of SNCC’s Alabama voter registration project. Before heading deeper South, he stopped at Tuskegee Institute to arm himself with information, sifting through newspaper records about the Citizens’ Council and lynchings.

In Selma, he worked with local organizations like the Dallas County Voters League that had been organized by S.W. and Amelia Boynton in the 1930s, taking the “time to develop local leadership and to bring various levels of leadership together in a way that they were able to sustain themselves through the struggle.”

Early in his life, Lafayette knew that the pursuit of social justice would be central to his life. After seeing the abuse his grandmother received on segregated streetcar system, he was “filled with an emotional feeling that [he] would never forget.” Lafayette “could not wait to get grown” and joined the NAACP when he was just twelve-years-old. “It was the moment that caused me to decide that I was going to use my life to fight against the segregation system.” 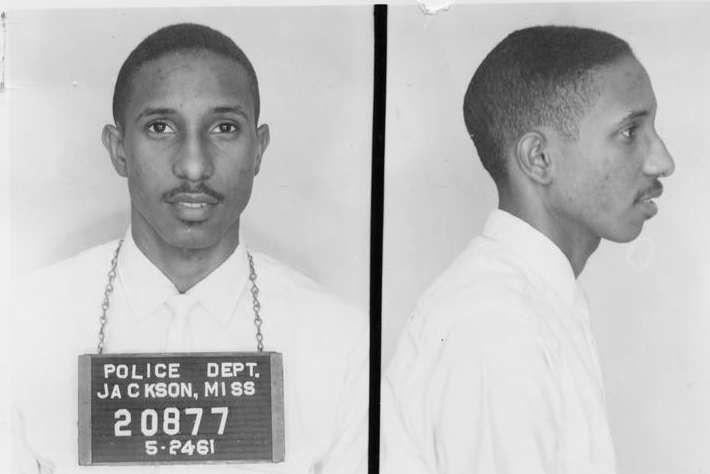 A mugshot of Bernard Lafayette, who was arrested for participating in the Freedom Rides, 1961, crmvet.org

As a freshman at American Baptist Seminary in Nashville, where James Bevel was his classmate, Lafayette participated in Jim Lawson’s nonviolent workshops and workshops at the Highlander Folk School. In 1961, he was badly beaten as a Freedom Rider in Montgomery, Alabama when a huge white mob surrounded the Freedom Riders and launched a brutal attack that was ignored by police. And on the night that Medgar Evers was murdered in Mississippi–June 12, 1963–Lafayette was severely beaten in Selma. Still, he never abandoned his commitment to nonviolence as a way of life.

Lafayette left SNCC to begin working with SCLC. Like James Bevel’s movement into SCLC, Lafayette’s shift highlighted the cross-fertilization that characterized much movement work. Lafayette went on to become one of the most widely recognized authorities on strategies for nonviolent social change and one of the leading exponents of nonviolent direct action in the world.

James Forman, The Making of Black Revolutionaries (Seattle: The University of Press, 1997).

Bernard Lafayette Jr. and Kathryn Lee Johnson, In Peace and Freedom: My Journey in Selma (Lexington, KY: The University Press of Kentucky, 2013). 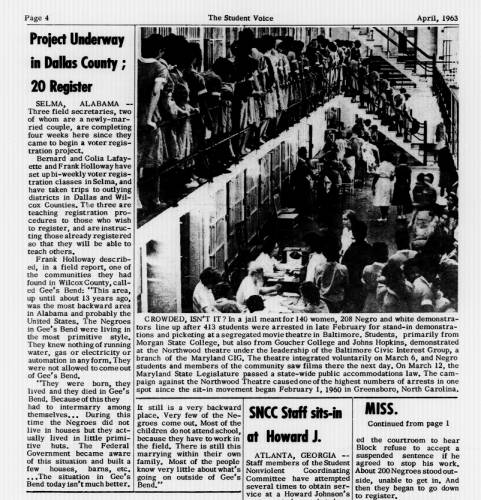 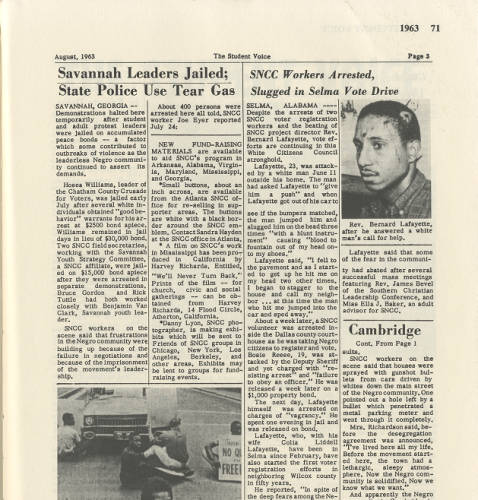