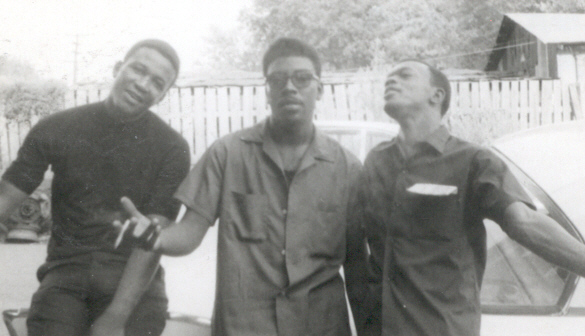 The family home of the Harris family at 623 Whitney Ave was a Freedom House that sheltered and sustained SNCC and other local activists in the 1960s. Rev Isaiah A. Harris, his wife Katie B. Harris and their eight children were a close knit family, all of whom devoted their lives to the Movement and welcomed SNCC’s organizing efforts in Albany, Georgia.

Rev. Isaiah Harris was the founding minister of Mt. Calvary Baptist Church, and, as far back as the 1940s, he used both his pulpit and the church’s facilities to encourage voter registration and provide literacy classes for people preparing to register. Harris’ wife, Katie, was a schoolteacher who continued to raise the children with a spirit of movement activism when Reverend Isaiah Harris died in 1951. Their father’s words and legacy lived on in the family: “Never back down when you are right. We’re in the Southland and we’re human beings, but they don’t treat us like we’re human beings.”

As active as their father was, in many ways the Harris children were sheltered. In the warm, protective embrace of home, and community, the most awful aspects of white supremacy did not reach them. Rutha went to college and after graduation returned home. SNCC and movement struggle had begun in Albany and “one day I was approached while walking down the street and asked if I wanted to be free,” she recalled. “I said, ‘Why are you asking me if I want to be free? I am free.’” More conversation led to involvement. “[I]realized I was not free,” she said, “I discovered there were many things people had gone through that needed to be changed.” 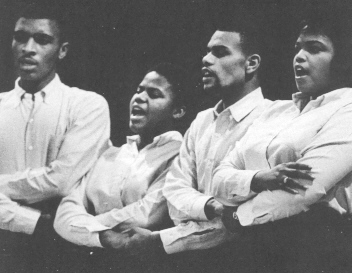 Rutha Mae Harris was one of SNCC’s original Freedom Singers in 1962. She remembers pacing the blocks of the SNCC office in 1961 with the resolve that she would be able to say “I was involved in the struggle. No one did it for me.” As a SNCC field secretary, Rutha Mae was arrested more than once, and on occasion, assaulted. She always called upon her father’s wisdom to fear no one. Singing especially helped ease fear. She sang in her sleep, did church solos at Mt. Calvary in the eighth grade, and by 1963 sang before the thousands of people gathered at the March on Washington. Her contralto voice was one of the most powerful in the Movement. SNCC’s Freedom Singers raised hundreds of thousands of dollars for SNCC, but as important as that was, most importantly, she says, “songs of the Movement gave you energy, a willingness and wantingness to be free.”

Her brother Emory, like his sister, was a singer too. During Albany’s mass meetings in 1962, he regularly led songs with his sister, community members, and SNCC workers, Cordell Reagon and Charles Sherrod. He also worked closely with SNCC’s voting rights efforts in Southwest Georgia. In 1964, he was one of the founding members of a second, all-male quartet of Freedom Singers. And there was also McCree Harris. Her students called her “Teach” for her commitment to educating Black youth. “Teach” invited the students to the family home when they needed extra help on school assignments, and under the roof of the Harris family home, students connected with visiting SNCC organizers. McCree firmly believed, “If the doors are to be opened for the youth, then they must help open those doors.” 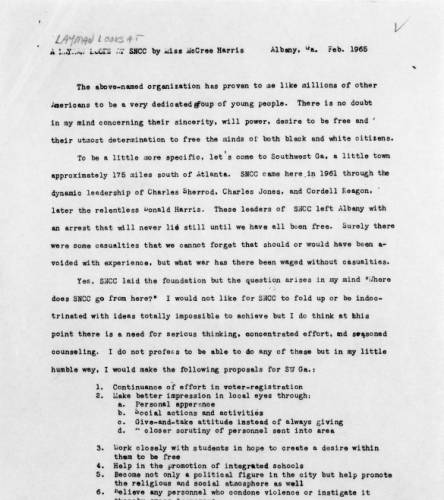