By early 1965, the SNCC Research Department decided it was time to enlighten their fellow staff members as to what they actually did. They titled their memo, “At Last!! The Paper You All Have Been Waiting For!! What is The SNCC Research Department…” After detailing “vast quantities of information” held in its library, the research staff stressed that their job was to get projects the “specific information” they needed for “specific programs.” Need facts to create an economics curriculum for a Freedom School? Want to know the laws and methods of forming a new political party in Alabama? SNCC’s research department had that covered.

Jack Minnis headed up the research department and made sure that SNCC staffers had the statistics, background, analysis, legal briefs, information, and whatever else they needed to know. According to fellow Atlanta office staffer Judy Richardson, Minnis was a “crusty older white guy who smoked like a fiend, looked generally unkempt, and could get research from a stone.”

Jack Minnis came to SNCC by way of the Voter Education Project (VEP). In the spring of 1962, Wiley Branton of the VEP and Les Dunbar, Director of the Southern Regional Council, hired him to assess the results of the voter registration projects that the VEP had sponsored throughout the South. This work had been funded by tax-exempt organizations, and Minnis found Branton and Dunbar to be “sort of edgy about whether recipients would observe the political prohibitions on such grants.” In the process of researching, Minnis found that his thinking was more in line with the politics of organizations like SNCC, who were on the receiving end of VEP grants.

When Minnis was eventually fired from VEP for his involvement in political activities, SNCC’s executive secretary, Jim Forman, was ready and waiting. He recruited Minnis to start SNCC’s research department. Minnis recalled, “I told him, sure, but we’re talking serious resource expenditures if you’re going to provide the research and intelligence for political organization and action.” Jim shot back that Minnis should simply tell him what he needed. That was 1962. “Within a year, we had a research department either the DNC [Democratic National Committee] or RNC [Republican National Committee] would have been proud of,” Minnis explained.

The Research Department wasn’t lying when it claimed it compiled “vast quantities of information.” Its newspaper subscriptions included the New York Times, Jackson Clarion-Ledger, Greenville Delta Democrat-Times, Memphis Commercial Appeal, Arkansas Gazette, Selma Times-Journal, Atlanta Constitution, and Albany [GA] Herald, to list just a few. The Research Department had subscriptions to a clipping service covering national newspapers and magazines, and to the Congressional Record, the Congressional Quarterly, and publications from major labor unions. It was also on the mailing lists of dozens of government agencies and had a library of government reports focusing on each southern state. Reference books, like Who’s Who in America, Who’s Who in World Commerce and Industry, Moody’s Manuals, Standard and Poor’s Registry, lined the shelves. There was also a complete set of Census Bureau publications covering the South.

The research department used this wealth of information to supply to field staff the information they needed, whatever that might be. At one point, Minnis and the research department started investigating the network of ownership in Mississippi’s “plantation factories.” Their sleuthing led them directly to the Queen of England. As Stokely Carmichael remembered, “None other than Elizabeth Regina, Queen of England, Empress of India, and by the grace of God, majority owner of one of the largest Mississippi plantations only slightly evolved from outright slavery.”

The research department also prepared an essential document for 1964 Freedom Summer: A Chronology of Violence and Intimidation in Mississippi Since 1961. The 17-page chronology listed incidents of violence related to voting rights and random acts of white terrorism. The 1961 murder of local voting activist Herbert Lee in Liberty, Mississippi by a white state representative, E.H. Hurst, was included, along with many other beatings, jailings and church burnings. Photos taken by SNCC’s photo department provide graphic illustrations. The long chronicle showed the systemic nature of Mississippi’s state-sponsored violence. The chronology was a staple in both the media and volunteer packets distributed that summer. 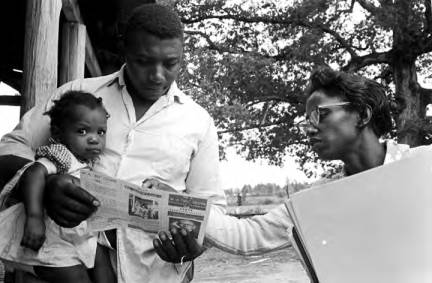 In the fall of 1965, Carmichael approached SNCC’s research department about the possibility of creating a new, independent political party in Lowndes County, Alabama. The local people he’d been working with in the Lowndes County Christian Movement for Human Rights were interested in forming their own political party to run Black candidates and win election to county offices. Jack Minnis combed through the twelve-volume set of Alabama Code of Law and found an obscure statute that allowed them to do just that. But there were provisions that had to be rigidly followed and, Minnis warned, “It’s going to take a major educational effort.”

That December, 25 Lowndes County residents journeyed to SNCC’s Atlanta office for political education workshops conducted by Minnis and the research department staff. They examined provisions for conducting elections and nominating independent candidates, as well as the legal powers of county offices. By the end of the weekend, those gathered agreed that winning county offices through an independent party was “the appropriate machinery for building the kind of society in that county, which the people of that county wanted.”

“The research department exists for your convenience,” the 1965 memo to SNCC staffers closed out. Its existence let SNCC enter into situations aware and knowledgeable of the forces at play. 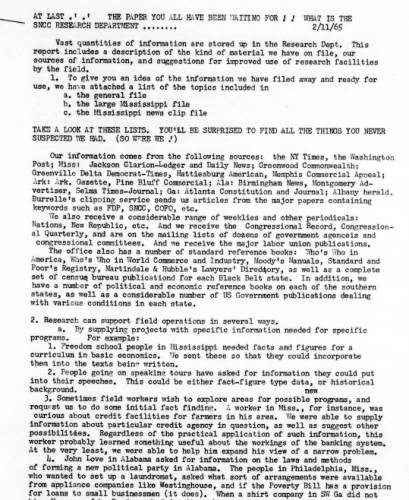 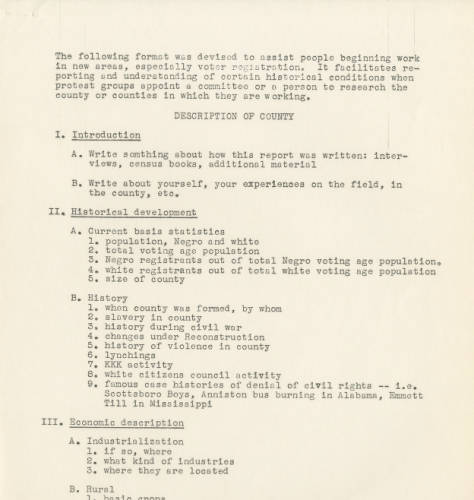 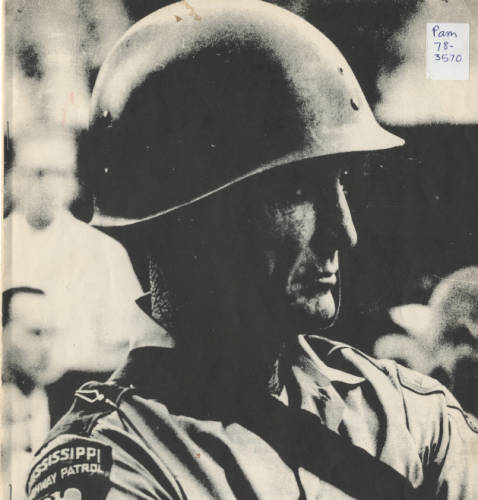 Jack Minnis, "A Chronology of Violence and Intimidation in Mississippi since 1961," 1964, WHS

Click here to view document Instructions on how to analyze a new area before beginning to organize there, [1963], crmvet.org