SNCC leader Bob Moses and Julie Poussaint were childhood friends, as was her brother Alvin Poussaint who later became a well-known psychiatrist for his work on racism. All three grew up in Harlem. So when Bob Moses came to New York City during Christmas of 1962 to promote the organization’s voter registration work in the Deep South, he stopped to visit Julie. Knowing that SNCC’s fledgling New York office needed all the help it could get with its upcoming fundraising concert at Carnegie Hall, Moses encouraged her, now Julie Prettyman, to volunteer to sell tickets for the show. She agreed, selling over fifty tickets on her own. With that start, she became a steady fixture at SNCC’s small operation on lower Fifth Avenue.

James Forman and Ella Baker had formed SNCC’s New York City office earlier that year to spearhead SNCC’s northern outreach and fundraising efforts. Ella Baker, a lifelong activist with extensive experience with New York politics, had helped the office get off the ground. But, as was her style, Ms. Baker was always on the lookout for young people to take on leadership roles in the Movement. So when Prettyman began to volunteer regularly, Ms. Baker groomed her to take her place at the office. By July 1963, “I was persuaded that I really needed to work with SNCC,” recalled Prettyman, who agreed to serve as SNCC’s first official director of operations in New York.

Prettyman signed on as SNCC’s organizing efforts in the Deep South were expanding. Earlier that spring, Sam Block and company made a major breakthrough in Greenwood, Mississippi, where after a year of quiet organizing, the local Black community was beginning to mobilize around the right to vote. SNCC’s Southwest Georgia Project was expanding into the rural counties surrounding Albany, and SNCC’s project in Arkansas was gearing up to work in the Delta, an area of intense economic and political oppression. With SNCC emerging as the cutting edge of the Civil Rights Movement, SNCC’s executive secretary James Forman looked north to raise consciousness about the organization’s work. He relied on Julie Prettyman and the New York office as a nerve center for SNCC’s public outreach and fundraising.

And Julie Prettyman didn’t disappoint. Under her direction, SNCC’s presence in the City flourished. The office was always full of volunteers, SNCC staffers from the frontlines, and celebrities and artists who supported SNCC’s work. Since its founding in 1960, SNCC had a strong relationship with several Black artists, especially Harry Belafonte, who helped raise funds and awareness for SNCC’s projects. Prettyman cultivated these relationships, creating a network of supporters that helped bankroll SNCC’s operations. She and her fellow New York staff members also came up with creative ways to elevate SNCC’s presence in the City. They held dinner parties and benefit concerts; they brought up SNCC field secretaries to talk about their experiences in the South; they organized educational conferences and had regular mailings. Julie Prettyman was at the center of all this, keeping track of everything in a little black notebook.

“We ended up with an amazing office,” recalled Prettyman. In 1963, the New York office raised roughly $60,000. The following year, they brought in $350,000, giving SNCC the money it needed to function behind the cotton curtain and in the remote corners of the Deep South. 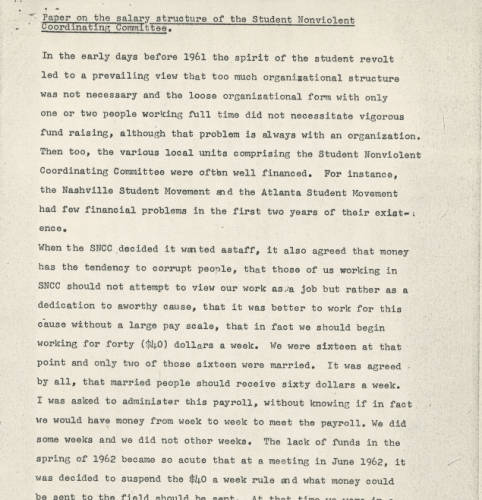