“We must not rest,” proclaimed Ella Baker to thunderous applause at the Black Masonic Temple in downtown Jackson, MS, “until the killing of a Black man, a Black mother’s son, is as important as the killing of a white man, a white mother’s son.” To those present, Ms. Baker’s words rang clear and true. During the previous month’s search for the bodies of murdered civil rights activists James Chaney, Andrew Goodman, and Michael Schwerner, numerous Black bodies were discovered in the bayous and rivers of Mississippi. But unlike Goodman and Schwerner–both of whom were white–these victims did not garner the interest of the national press or the federal government; and their identities remained unknown. 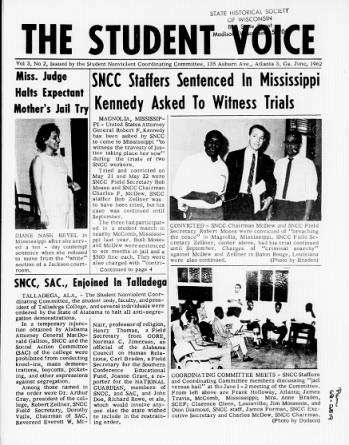 From its inception, SNCC’s Communications Department worked hard to counteract the implicit racism of the national media, which catered primarily to a white, northern audience. This was “a fundamental obstacle,” remembered Mary King, who worked with Julian Bond in the Communications Department. “The activities and grievances of the Black community were not considered newsworthy.” With the help of seasoned activists like SCEF’s Anne Braden, SNCC developed a sophisticated and far-flung communications network that brought human rights abuses against Black citizens, deliberately hidden by media in the Deep South, to the national conscience.

From its founding conference in Raleigh, NC, in 1960, SNCC recognized the importance of communications. The nascent organization formed a Committee on Communication, which recommended the publishing and distribution of a newsletter; a system of flash reports that could alert the nation to serious developments; and public relations that would issue “public and interpretive statements” to the press. Under the leadership of James Forman, the committee morphed into SNCC’s Communications Department. Forman hired Julian Bond as communications director and Dottie Miller Zellner to write and distribute information to the press and support groups, some of which was included in The Student Voice—SNCC’s own newsletter. Bond had been a reporter for The Atlanta Inquirer, a Black paper begun to counter the conservative and also Black-owned Atlanta Daily World.

Bond and Zellner, and later Mary King, worked hard to develop SNCC’s Communication Department. Zellner recalled “work[ing] with Julian writing press releases, firing off indignant telegrams to the Kennedys in Washington, and writing letters to northern supporters and articles for The Student Voice and SNCC pamphlets.” They recorded stories from the field that came in through the WATS (Wide Area Telephone Service) line, a phone line similar to an 800 number, and churned out press releases. They wrote articles for The Student Voice and hand-cranked hundreds of copies of the newsletter on the office’s printing press. 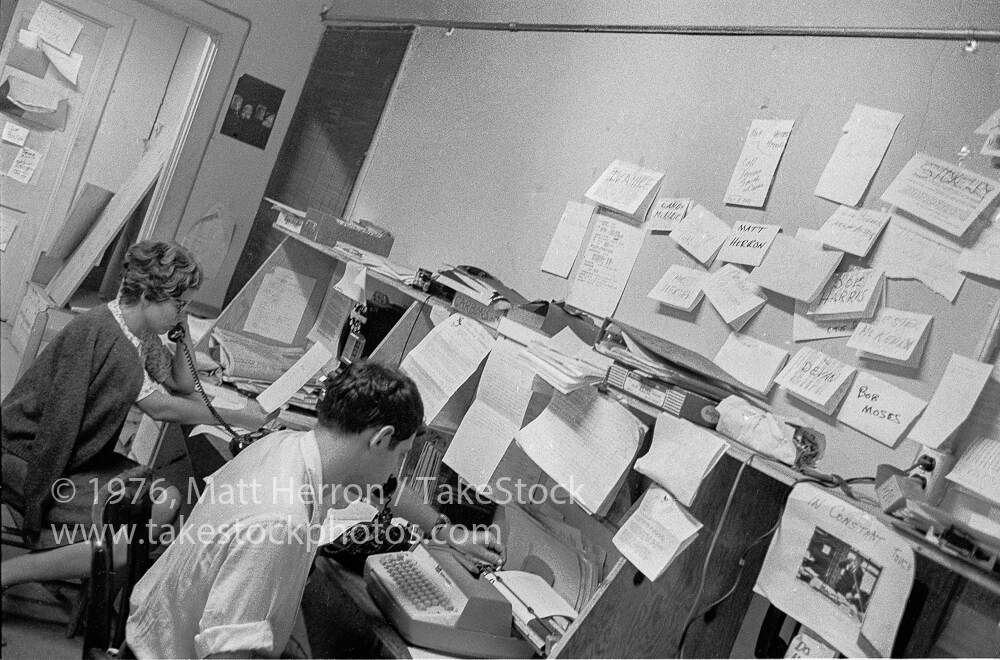 The upstart group also had to navigate the tricky waters of the national news industry. This at a time when most news coverage was only in a print version, and the nascent TV industry was coming of age through coverage of the southern movement. Most major news organizations, including the major wire services (the Associated Press and United Press International), didn’t keep reporters in the Deep South. They relied on local “stringers” to feed them stories. Mary King remembers that these local reporters “were often hostile to the Movement and did not consider acts of brutality, casualties, or attacks on African Americans as sufficiently newsworthy.” To combat this, SNCC maintained contact with sympathetic journalists within major news companies, like Claude Sitton of The New York Times and Karl Fleming of Newsweek, who would goad their editors into covering movement-related events. “The challenge,” remembered Julian Bond, was “to get these journalists interested in it … this meant cultivating them and telling them, ‘I got something for you. This is something hot. This just happened.” The organization also developed an extensive national network of “Friends of SNCC chapters“, which applied pressure on local and national news sources to pick up movement stories.

These tactics worked well. By the spring of 1963, the department entered a relatively flush period. “We were mobilizing support groups in all the key cities around the country, contriving to make it impossible for the wire services to walk away from a story, rousing the national press corps,” remembered Mary King. “All this we did with but two telephones crooked in our necks.” In preparation for 1964 Mississippi Freedom Summer, all northern volunteers were asked to list their hometown news outlets on their applications. In addition, Julian Bond and his brother James visited selected Mississippi projects to gather short interview tapes to send back to the volunteers’ hometowns. All this with the aim of keeping the eye of the northern media–and its constituency–on the racist atrocities being committed to maintain white supremacy.

SNCC’s Communications Department complemented the organization’s work in the field. The department mobilized national networks that provided both financial support and hoped-for protection for field workers who were at the mercy of local power structures and an antagonistic FBI, whose local agents were often former southern sheriffs or other law enforcement personnel. The Communications Department worked hard to shine a spotlight, no matter how small, on the Deep South. Tirelessly, they relayed stories from the field to the rest of the nation through machinery that they created and maintained. Mary King emphatically noted that “the techno-bureaucratic word ‘communications’ fails to convey the substance and value” of SNCC’s Communications Department. “Basically we managed a Southwide information system.”

Mary E. King, “Getting Out the News,” Hands on the Freedom Plow: Personal Accounts by Women in SNCC, edited by Faith S. Holsaert et al. (Urbana: University of Illinois Press, 2012).

Gene Roberts and Hank Klibanoff, The Race Beat: The Press, The Civil Rights Struggle and the Awakening of a Nation (New York: Alfred A. Knopf, 2007).