Peggy Dammond’s activism had deep family roots, and she saw her involvement in SNCC and the Freedom Movement as a “fulfillment of destiny.” Her great uncle, William Monroe Trotter, founded the Boston Guardian, a militant Black newspaper that often critiqued Booker T. Washington’s cautious approach to racial advancement. Trotter believed that Black Power was foundational to Black advancement, and his thought fueled his great niece’s belief “that black people should move beyond the context of their own family and their own world of job and home to help their race.”

In the 1940s, Dammond and her younger brother attended the Dalton School, an affluent, white private school in New York City. There, she found a community of conscious social reformists who inspired her to become more active in social justice struggles. Dalton School’s liberal pedagogy gave Dammond a foundation when she began joining activist groups in the 1950s.

Dammond’s parents also firmly believed in community work and urged their daughter to join the NAACP, the Harlem Brotherhood, and the YWCA. Within these organizations, Harlem residents worked to address issues of injustice within the local Black community. It was in Harlem that Dammond also met Bob Moses, who became SNCC’s Mississippi Project Director, and Ronald Brown, who went on to be the first African American Secretary of Commerce. Harlem, she recalled, was “incredible training ground for black activism.”

In December 1961, Angeline Butler, a member of the Nashville Student Movement, asked Dammond to join in movement activities beyond Harlem. Dammond and her younger brother enthusiastically agreed. Dammond was arrested at her very first sit-in at a restaurant in Maryland’s Eastern Shore. She remembered her first experience in jail as a “crusade” and recalled white guards singing freedom songs alongside prisoners. Such an experience contributed to what she later called SNCC’s “naïveté and hope” in believing that white America would be morally obligated to change if only made aware of their wrongdoings.

In the spring of 1962, while a student at Hunter College, Dammond began assessing her position within the Movement and determined that “if not now, when, and if not me, then who?” So that summer, she moved to Lee County, Georgia to work for SNCC’s Southwest Georgia Project. In Lee County, she stayed with Mama Dolly Raines. Mama Dolly’s strict rules on attending church helped her gain acceptance and trust from the community, an imperative for her job as a voter registration field worker. At one meeting, Dammond stated that “tears that had long since been clotted in dry throats gushed forth when another neighbor raised his hand to tell he been down to the courthouse to register.” In light of the danger brought to local people by the presence of SNCC organizers, demanding their right to vote helped fight the culture of fear Black residents felt towards whites in Lee County.

After the summer of 1962, Dammond returned to school at Boston University where she did fundraising for SNCC, participated in anti-Vietnam protests, and helped draft the original Freedom School curriculum. Dammond claimed that “being a SNCC student set the stage for how I lived the rest of my life.” Although she was no longer a part of SNCC when it became an all-Black organization, Dammond “felt it was necessary [for SNCC] to move to the next level,” to move beyond the “moral high ground that pervaded the organization in 1962.”

She went on to earn a master’s degree in Public Health and continued working on projects to better the health of women and inner-city youth in California.

Peggy Trotter Dammond Preacely, “It Was Simply in My Blood” Hands on the Freedom Plow: Personal Accounts by Women in SNCC, edited by Faith S. Holsaert, et al. (Urbana: University of Illinois Press, 2010), 163-172. 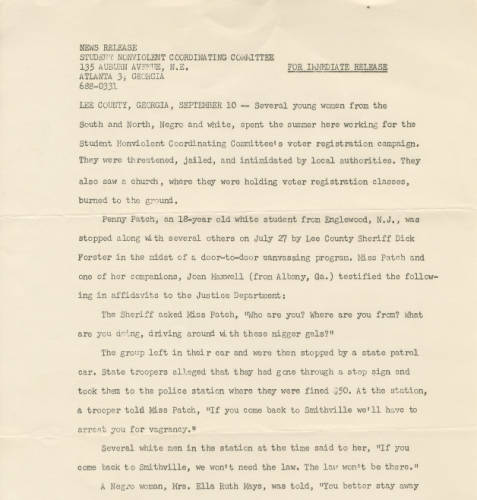