The Miles family farm near Batesville, Mississippi was a hub for civil rights activity in Panola County. Throughout the sixties, the family sheltered and fed young activists coming to the county to organize local Blacks for political and economic power. Penny Patch lived with the Miles family in the winter of 1964-1965 when she was organizing Black farmers to participate in the Agricultural Stabilization and Conservation Committee (ASCS) elections. Marilyn Lowen stayed on the farm when she came to the county to help set up a Head Start program for preschool aged children. The Miles’ home was often the target of white vigilante attacks. Mr. Miles and neighbors established an armed self-defense group.

White violence, notwithstanding, Robert Miles was always at the cutting edge of the Movement. Patch remembered Miles as “an intensely quiet, kind, and soft spoken man” who was among the first to volunteer to run in the county’s ASCS election. He was the second Black person in the county to become a registered voter and was also a leader in the Head Start program.

Miles’s activism began before SNCC activists came to the county. In 1959, he helped to organize a local NAACP branch. When the branch folded because of intense economic and political pressure from the county’s white elites, Miles organized a Voters’ League to take its place. Like many other Mississippians, Miles focused on the franchise because he knew “that that’s where the power lies, is in the ballot.” Members of the Voters’ League knew that registering to vote was going to be “a tough task, but still some of us was willing to volunteer to go first.” Miles and other local movement stalwarts, including Rev. W.G. Middleton, volunteered to be in the first group to go to the courthouse to take the voter registration test. Everybody in the group failed the test, and the county registrar, Leonard Duke, told Miles that there was no need for him to come back. He was never going to allow Blacks to register.

When Miles and the others returned home, various law enforcement officers paid them a visit, attempting to intimidate them. Miles remarked to a friend, “We’re having all kinds of visitors, I see, this morning,” and his friend replied, “Yes, and the undertaker.”

During Freedom Summer, Miles played a leading role in organizing the Mississippi Freedom Democratic Party in Panola County. He attended all of the meetings and was overwhelmingly supported as a delegate to go to Atlantic City to the Democratic National Convention, where the MFDP would challenge for the seats of Mississippi’s regular, exclusionary Democratic Party. Miles was one of the many MFDP delegates to reject the compromise, which would’ve awarded the MFDP delegation only two at-large seats at the convention. “We rejected the two seats because this is what we’d been used to all of our lives. Just a measly bite.”

Miles remained an important figure in the MFDP after Freedom Summer, serving as an executive board member. He also worked as the secretary for Panola’s Voters’ League and helped form a cooperative with local okra farmers after a white purchaser refused to pay more for the crop. Under his leadership, the co-op expanded to include other vegetables and cotton and applied for a $113,000 grant from the Farmer’s Home Association for land and equipment. By the mid-1960s, Panola Blacks, with the help of Mr. Miles, were experimenting with innovative ways to strengthen Black economic and political power in the county.

Marilyn Lowen, “I Knew I Wasn’t White, but in America What Was I?” Hands on the Freedom Plow: Personal Accounts by Women in SNCC, edited by Faith S. Holsaert et al. (Urbana: University of Illinois Press, 2010), 540-552. 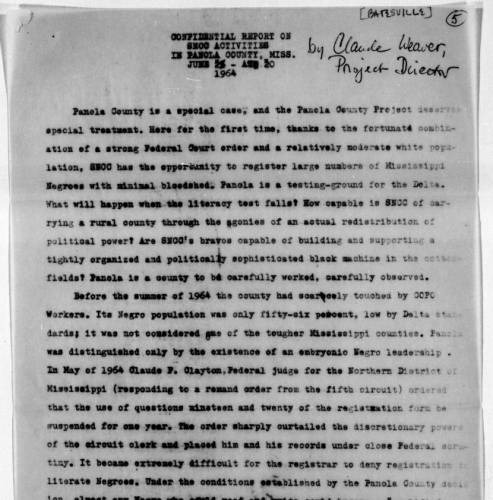 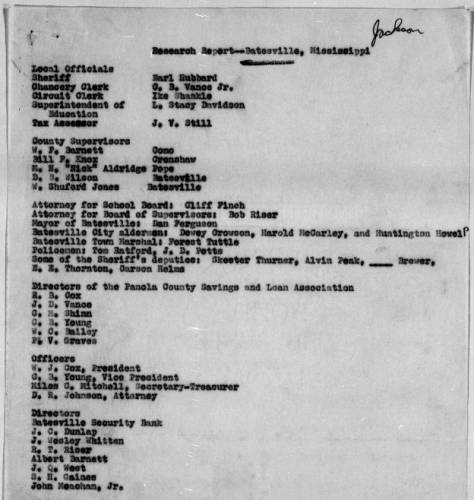 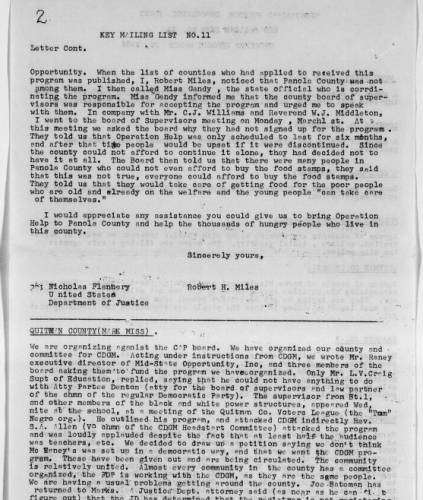