Following his volunteer work in Mississippi, Tom Levin, a psychoanalyst who had worked with the Medical Committee for Human Rights during the Mississippi Freedom Summer in 1964 had an idea for creating a dynamic learning environment for poor Black children. And he envisioned using federal Head Start money to do it. 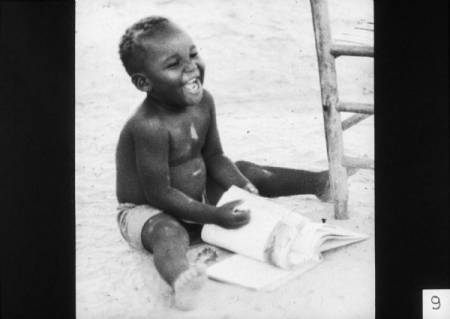 A young toddler sitting on the ground with a book, 1964, Mississippi Freedom Democratic Party Records, WHS

Head Start had been launched as part of the War on Poverty in the summer of 1965. It offered preschool training, two hot meals daily, and medical care. The newly-formed Office of Economic Opportunity (OEO) allotted $84 million dollars to Head Start programs around the country; $1.5 million of which was intended for Mississippi under the auspices of Child Development Group of Mississippi (CDGM), which Levin headed.

Inspired by the Freedom School program, Levin felt that more than that could be done. At SNCC’s 1964 Waveland Conference, he had argued for preschools that would “act as a focus to organize a community around all their social aspirations.”

CDGM was unusual because it deliberately chose to associate with Mississippi’s Civil Rights Movement. CDGM relied heavily on the local movement network that was built through years of struggle. It contacted COFO and MFDP leaders in various communities, who, in turn, set up school boards and hiring committees, canvassed for pupils, and generated community support. By the start of the first eight-week session in July, CDGM had 84 centers staffed by 1,100 adults and serviced roughly 5,600 children.

For local activists, CDGM became a vehicle for continued activism, especially as SNCC’s presence in the state began to wane in the mid- and late-sixties. CDGM lived out the War on Poverty’s call for “maximum feasible participation” of poor people in poverty programs that affected their lives. The organization took steps to insure that local people were involved in the on-the-ground decisions that made Head Start a reality. “When you talk about CDGM,” Issaquena County activist Unita Blackwell explained, “we are talking about the people in the community.” But this made CDGM a constant target of Mississippi’s racist power structure.

Although CDGM was lauded by OEO officials as a model Head Start program, that praise did not protect the organization from systematic attack from the white power structure in Mississippi, which feared the commitment to Black empowerment that underlay its work. Local people who enrolled their children in the program faced reprisals like being evicted from their homes. Community centers that hosted the schools were threatened with arson and subjected to drive-by shootings. Local school boards refused to allow CDGM access to public school premises or use school buses for transportation. 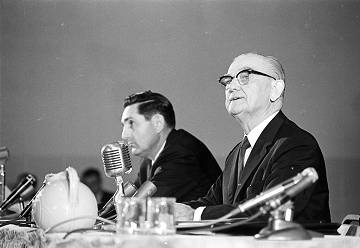 Local Black communities persisted despite harassment. But attack from within the federal government itself was much more difficult to fend off. Mississippi Senator John Stennis made it a personal and political mission to destroy CDGM. He used his considerable power as a member of the Senate Appropriations Committee to coerce OEO officials into investigating CDGM’s administration and record keeping. His constant cajoling ultimately undermined OEO’s support for CDGM, which had to fight tooth and nail for refunding.

Under federal pressure, CDGM removed Levin. The attacks against it continued, however. A rival to CDGM–Mississippi Action for Progress (MAP)–was created. CDGM received two more OEO grants before funding ceased in December 1967. The organization’s demise reinforced the influence of entrenched white power within the ranks of the federal government.

David C. Carter, The Music Has Gone Out of the Movement: Civil Rights and the Johnson Administration, 1965-1968 (Chapel Hill: University of North Carolina Press, 2009).

Polly Greenberg, The Devil Has Slippery Shoes: A Biased Biography of the Child Development Group of Mississippi (London: The Macmillan Company, 1969).

Marilyn Lowen, “I Knew I Wasn’t White, but in America What Was I?,” Hands on the Freedom Plow: Personal Accounts by Women in SNCC, edited by Faith S. Holsaert et al. (Urbana: University of Illinois Press, 2012).

Maris A. Vinovskis, The Birth of Head Start: Preschool Education in the Kennedy and Johnson Administrations (Chicago: University of Chicago Press, 2005). 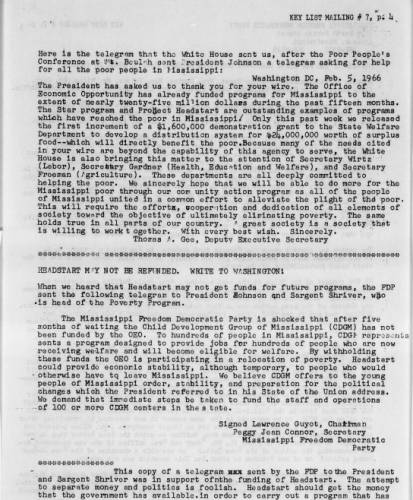