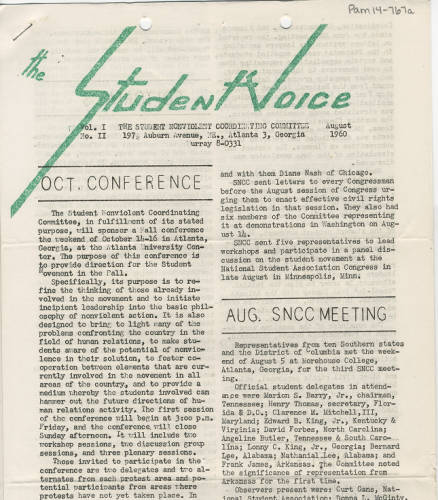 In the summer of 1960, using Ella Baker’s extensive network, Bob Moses traveled through the Deep South to recruit students to attend SNCC’s October conference in Atlanta. A key person in that network was Bolivar County, Mississippi NAACP president Amzie Moore. In the early 1950s, the World War II veteran had also been an active member of the Regional Council of Negro Leadership (RCNL).

Moore put voter registration on the table, wanting to use the student energy of SNCC. This was the first time Moses even considered the idea, and though uncertain as to what SNCC’s reaction would be to it, he promised Moore that he would return to Mississippi the following year to help. Moore said he would go to SNCC’s conference and present the idea to the organization.

At the October conference, most of the attendees were cool to the idea. “Jail without bail” dominated conference conversation, and many worried that their Movement would be co-opted by the federal government if activists worked within the political system. Over the following year, while never pushing students to adopt one strategy or abandon another, SNCC mentors like Ella Baker and Amzie Moore used their experience to influence the continuing debate over voter registration. Moore and Baker knew that most Black Mississippians were too poor to benefit from the desegregation of a lunch counter. They knew southern Black leadership saw organizing for the vote as an opportunity for Black people to control mechanisms of power in their communities. And they knew that working for voter registration was direct action.

For his part, Moses, who did not attend the October conference, returned to Mississippi in the fall as he had promised. There, Amzie Moore sent him to his NAACP colleague in McComb, Mississippi, C.C. Bryant, who had seen an article in Jet Magazine about SNCC’s plans to start a voter registration project and had asked Moore to send SNCC people to his small city. Moses was the only SNCC person in Mississippi, but he went down anyway.

Thus, SNCC’s first voter registration project began in McComb. Reflecting on Moore and his influence on SNCC, Bob Moses said years later, “Amzie saw the students as a way out; I mean he really felt that these students… were going to accomplish something…”