A year after SNCC’s founding, a critical debate almost destroyed the young organization: voter registration versus direct action. It came to a head at a tumultuous meeting at the Highlander Folk School in Knoxville, Tennessee that took place in mid-August 1961.

The Kennedy administration, hostile to sit-ins and Freedom Rides, was pressing the civil rights establishment to turn away from protest and towards voter registration. It promised that money could be made available through foundations it influenced.

Direct action advocates felt that this meant working too closely within the political establishment, which couldn’t be trusted. The Kennedy administration’s urging of voter registration activism was suspicious to these SNCC activists, who viewed it as an attempt to co-opt the Movement and blunt its militant edge. The Nashville group was especially wary of SNCC’s resources being “directed away from spiritually empowering nonviolent direct-action tactics.” To these nonviolent direct action proponents, focusing on voter registration seemed to be slow work with no certain effect. “Marion [Barry] was arguing big and strong,” Charles Jones remembered. The direct action camp believed they should try to force an immediate response and win political change from outside the conventional voting system.

Those who agreed with the idea of turning to voter registration–including Tim Jenkins, Charles Sherrod, Chuck McDew, and Charles Jones–believed that mobilizing people to vote would demonstrate the power of Black people. After meeting with the Kennedy Administration, Jenkins explained that “they couldn’t do very much to make things happen unless somebody took the initial risk, and they could take the steps to protect them.” Those inclined towards voter registration believed that political awakening through registering Blacks to vote would bring real changes to the lives of Blacks in the South. Furthermore, this was what local Black leaders in the South wanted to emphasize.

The August Highlander debate overlapped with another ideological question present in SNCC since its founding: whether nonviolence was a useful tactic or whether it should be a way of life. Passionate and committed SNCC workers on both sides believed their philosophies would most effectively bring about change in the South. They questioned whether the organization could operate with such ideological disagreements, and at that impasse, SNCC nearly collapsed.

As the organization began to dig into local communities, the split diminished in importance. SNCC became an organization of organizers, with much though not all of its work, built around gaining voting rights. By the time SNCC moved into McComb, Mississippi, Baker explained, “it became obvious there was no irreconcilable difference between the two tactics.” And Charles Jones remembered the white power’s reaction to SNCC arrival: “Well, McComb said, ‘What distinction between direct action and voter registration? All y’all going down!’”

Charles Payne, I’ve Got the Light of Freedom: The Organizing Tradition and the Mississippi Freedom Struggle (Berkeley: University of California Press, 1995), 110-11.

Howell Raines, My Soul is Rested: The Story of the Civil Rights Movement in the Deep South (New York: Penguin Books, 1977), 288.

Ella Baker explains why it was important for SNCC to stay united as one group [41:20], interview by Eugene Walker, September 4, 1974, Documenting the American South, UNC 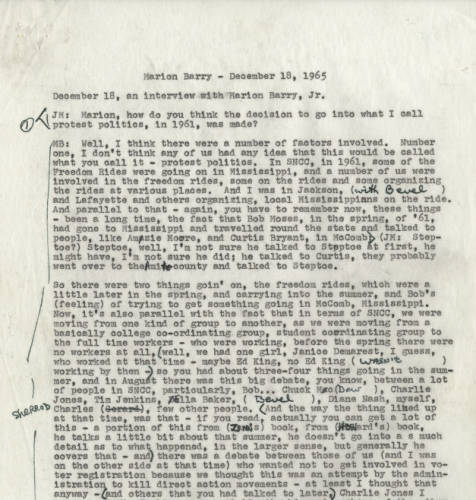