The first sit-ins in South Carolina took place in Rock Hill on February 12, 1960. Black students from Friendship Junior College and Claflin College sat at McCrory’s department store lunch counter downtown, which sparked city-wide sit-in protests. In turn, a local white Citizens’ Council was founded in an attempt to defeat the Movement, and, at the state level, Governor Ernest F. Hollings huffed that the sit-ins “are purely to create violence and not to promote anyone’s rights.” Nonetheless, sit-ins continued on periodically for most of the next year.

Over in Atlanta, SNCC discussed and debated the “Jail-No-Bail” tactic at its second conference in October 1960. Supporters believed it would “show the movement’s sincerity and win fresh media attention.” As a practical matter, Jail-No-Bail also eased SNCC’s funding difficulties. The organization couldn’t afford thousands of dollars to bail people out and did not want to reinforce racist police departments with their bail money.

Throughout the 1960 protests, Rock Hill remained rigidly segregated. So, on February 1, 1961, Rock Hill protesters adopted Jail-No-Bail. Tom Gaither, the Claflin College student body president and CORE leader, and nine others had been arrested for trespassing at McCrory’s lunch counter. They were ordered to pay a fine of $100 each or serve 30 days hard labor on the county chain gang. All but one began serving their sentences at the York County Prison Farm on February 2. They were quickly dubbed the “Rock Hill Nine.”

Tom Gaither used one of his jail calls to ask SNCC’s Atlanta office for support. SNCC quickly sent four leaders to Rock Hill, marking the first definitive action by SNCC as an “organization of organizers.” Diane Nash, Ruby Doris Smith, Charles Sherrod, and Charles Jones protested in Rock Hill and like the nine, refused bail after they were arrested. They too were sentenced to hard labor. The two women were sent to the York County Jail, while the men were sent to the Prison Farm to join the Friendship Nine.

In the February issue of The Student Voice, Nash wrote, “we feel in good conscience we have no alternative other than to join them.” Ed King, SNCC’s first executive secretary stood behind them, saying, “only by this type of action can we show that nonviolent movement against segregation is not a local issue for just the individual community, but rather a united movement of all those who believe in equality.”

Outside jail, SNCC led a weekend of mass protest in Rock Hill beginning February 12th, busing in 40 Black students from Nashville for support. On Sunday, the protesters staged a “kneel in” at five Rock Hill churches. They were turned away from two and caught on film by Charlotte TV crews. A 600-person motorcade to York County Prison Farm in support of the imprisoned activists culminated the protest.

The four SNCC activists served their sentences, but as Charles Sherrod explained, jail was a school. “You get ideas in jail…We’re up all night, sharing creativity, planning action. You learn the truth in prison, you learn wholeness. You find out the difference between being dead and alive.” Afterward, the Rock Hill SNCC activists dropped out of school to become full-time SNCC workers. 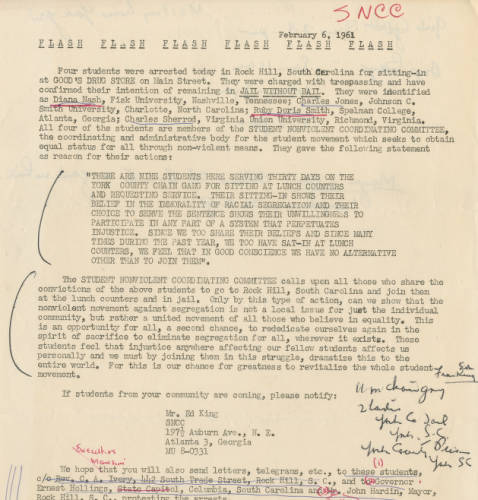 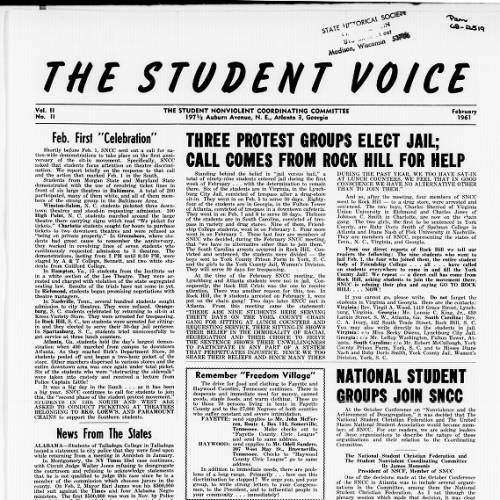